If you’re looking for a country to experience weird and wonderful food (sometimes just weird!), look no further than South Korea. Korean cuisine, is generally incredible, especially if you like it spicy. At the same time, they have
some delicacies which might make your stomach turn!

From eating seafood so fresh that it’s still wriggling, to eating what’s known as ‘dead body soup’ (because of its strong smell!), a trip to any Korean market is likely to be full of surprises.

Before setting off to South Korea there are a number of important things to bear in mind but make sure you at least apply for your South Korea Visa before traveling! 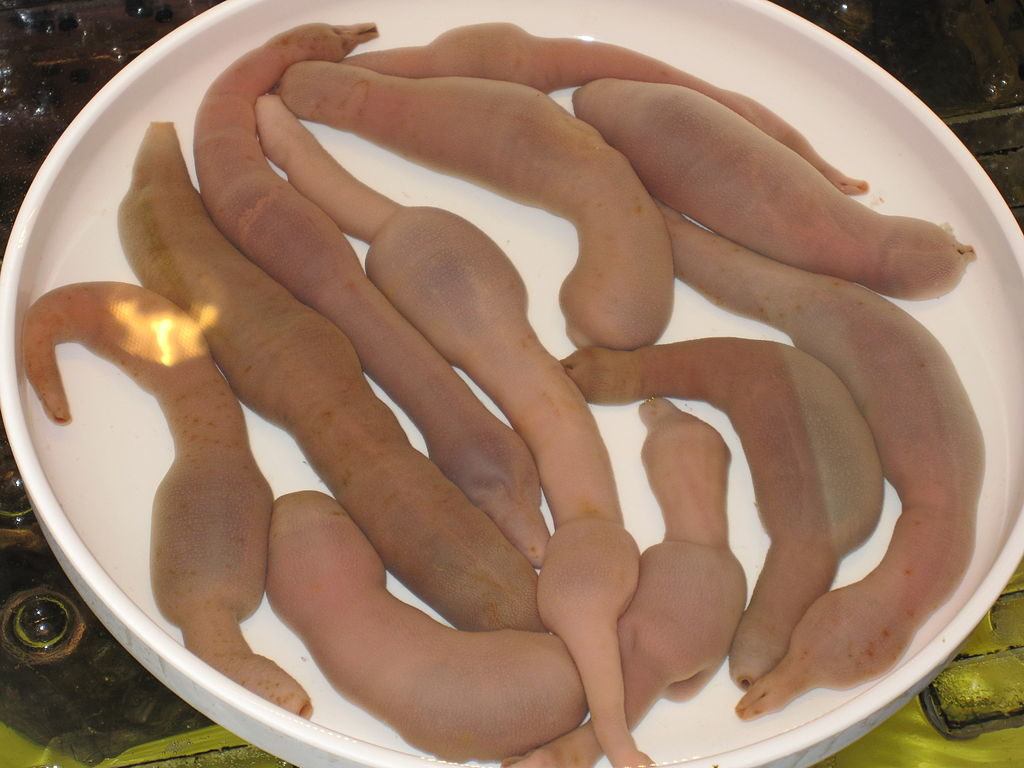 If spoon worms don’t sound appealing enough already, they are also sometimes known as the ‘fat innkeeper worm’ or ‘penis fish’ (as the resemblance is uncanny). They are cylindrical and are about 10-30 cm long.

They are a yellowy-brown color and have small individual papillae on the surface of the body. When consumed, they’re sliced up while they are alive and the small pieces continue to move. Despite their strange appearance, spoon
worms are delicious if you can stomach them. 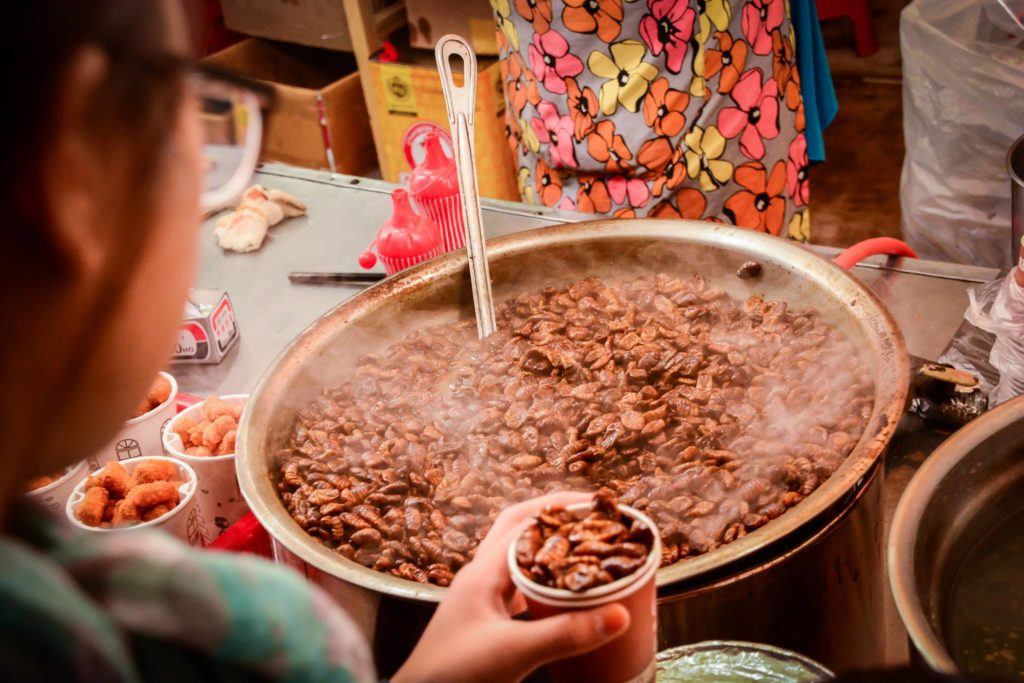 Beondegi is steamed or boiled silkworm larvae. They are normally served with alcohol as a popular street food. The dish rose to popularity during the Korean War out of necessity as protein was in short supply but they have since become a street classic.

Whenever you’re at a Korean street market you can be sure to get a whiff of the smell of boiling silkworm larvae. You can normally find roast crickets at the same stalls too. Once you’re open to the idea of eating insects, they’re surprisingly good. 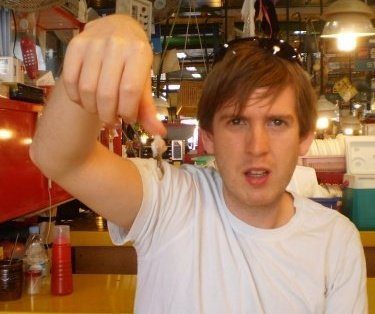 Sannakji is raw octopus which is sliced up but continues to move. Although it is technically dead, the tentacles still squirm as so many of the octopus’ neurons are in its tentacles. The dish is drizzled with sesame oil and sprinkled with
sesame seeds.

You have to chew it up properly when you eat it as the suckers still function. You can feel the suction on your teeth and tongue when you eat it. Be very careful as sannakji sucking on the insides of your throat isn’t ideal! 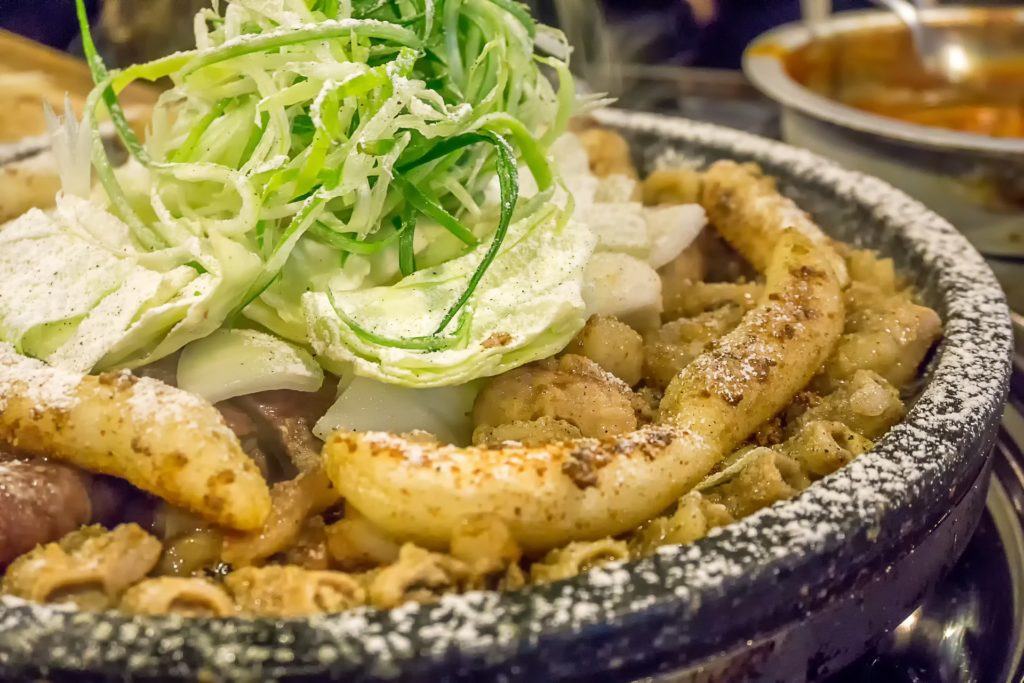 Pig intestines (yummy!). They can be grilled over a barbecue, boiled as a hot pot, or made into a soup. When it is grilled it is fairly chewy and served with a dip. This is a dish which is not as difficult to eat as the others on this list.

It’s very tasty, considered a delicacy, and it’s very nutritious. It is even served as a health supplement for recovering patients. In the past, it was very cheap but now it is one of the more expensive things you can find at a Korean butcher.

It is known in the west as ‘dead body soup’ because of its strong smell. According to the urban legend, some Korean students living in Germany were cooking the dish, when their neighbours called the police because they thought
the smell was a deteriorating corpse.

The soup is made from fermented soybean paste which creates a strong ammonia smell. But don’t let this put you off! The cooking smell and the final taste do not equate (thankfully!). It is an incredibly delicious soup. 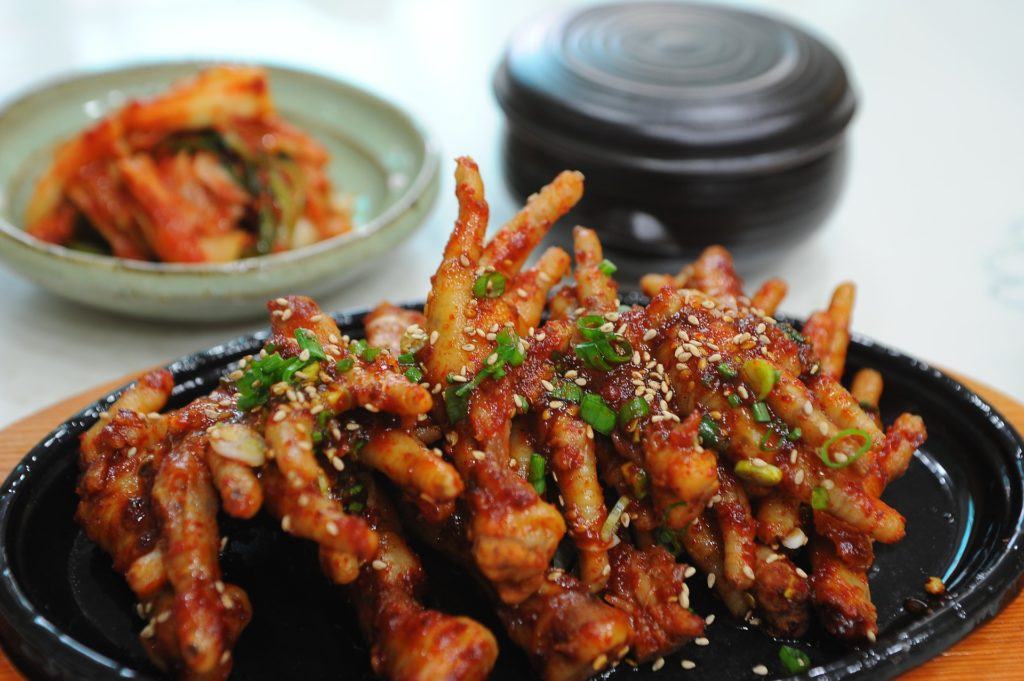 Chicken feet are typical in a number of Asian countries, including South Korea. The texture is unusual as chicken feet consist entirely of skin, bone, and cartilage. They are not the meatiest things to eat, but it’s impressive they’ve
been turned into such a tasty dish.

Chicken wings were not always the most popular snack in the world so bear this in mind. Like buffalo wings, they’re served with a delicious sauce with is both spicy and sweet like many Korean dishes. Definitely worth a try if you’re a chicken-lover.

Looking for hotel options in South Korea? We recommend HotelsCombined. They have a great selection and help you get the best possible price! 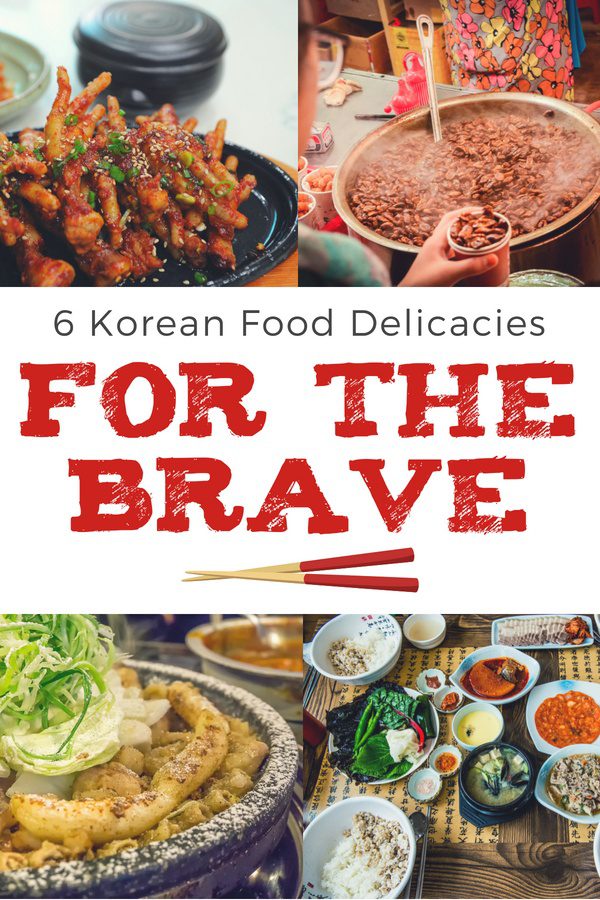