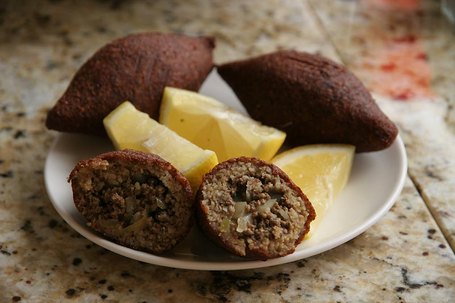 Also popular in Jordan and Iraq, It a ball of ground meat! Usually Lamb, beef or goat and deep fried, though occasionally baked or cooked in a broth.

A mention for Lebanon’s other and better known national dish… 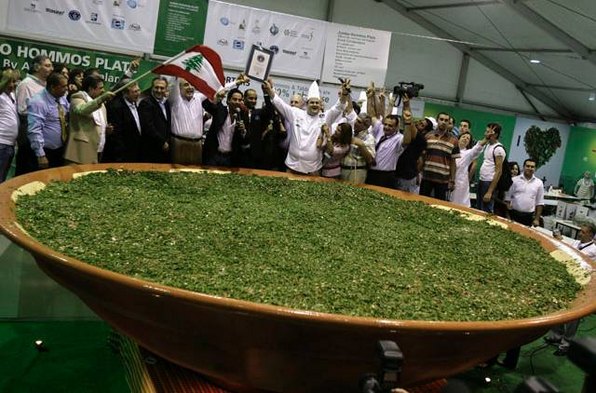 This bowl of tabbouleh is the world record holder weighing 4,324KG when it was created in Israel in 2009. 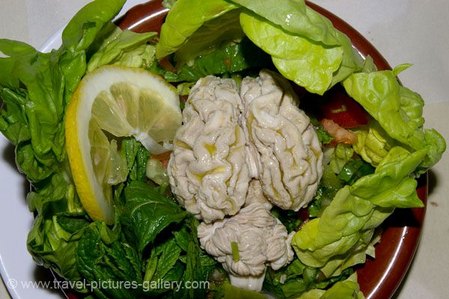 Its not the first brain on this list, and doubtless won’t be the last, but an A+ for disinterest in presentation for this one… Put brain on lettuce, serve with lemon wedge. Done. Also available in Jordan, whoohoo!

Here they cook the rice in coconut milk (the English translation is “fatty rice”) and have sides of cucumber, peanuts, dried anchovies, a spicy sauce called sambal and, of course, half a boiled egg.

What might this strange mushy mess be? It is in fact Fermented Durian. If you have already encountered fresh Durian Fruit you are aware of the stench that radiates from it, infesting your poor unsuspecting nostrils to the point that it is banned from the subway in singapore and market sellers are often separated from the main markets in most countries. However, Malaysia have decided to go one better and ferment it!! It can be eaten either cooked or uncooked and is often found in curries. 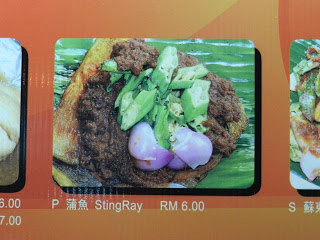 For $2 we at stingray in Kuala Lumpur’s chinatown. Unexpectedly awesome. Read about our experience eating sting ray. (With Video) 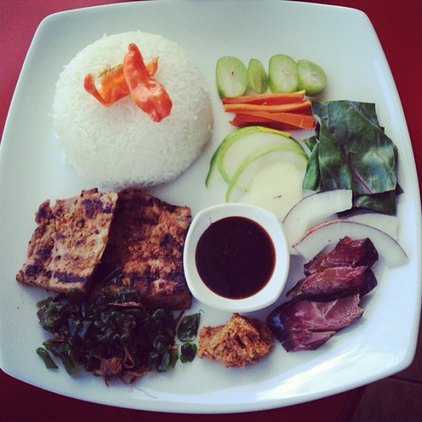 The photo is of the “posh version” of this Maldivan classic. Traditionally its just Tuna with a sauce made from dried cherry peppers, curry leaves, salt, lime and onions. Served with rice – of course.

We couldn’t find any weird food for the Maldives, so if you know about something then leave a comment for us so we can add it! Thanks 🙂 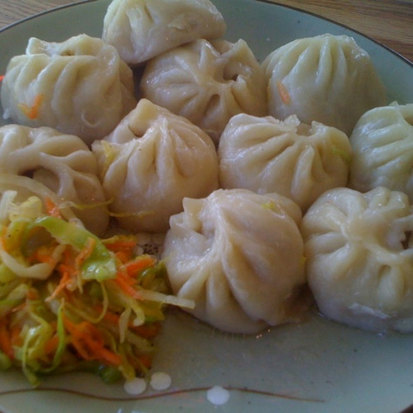 Its another classic steamed dumpling filled with meat, generally lamb or beef with salt, garlic, onion, fennel seeds, and whatever else is available at the time. A real make-do food out in the wilds. Tasty tasty. 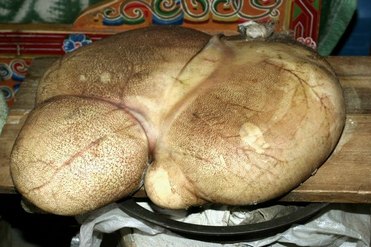 This is as gross as it sounds, no, worse. Leave butter to intentionally rot inside a cows stomach. 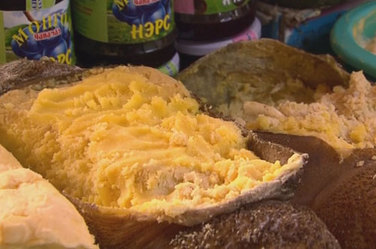 Then cut open and consume, if you can… Imagine eating rotten, fatty vomit. Nice.

This dish consists of steamed rice and lentil (dal) soup, a side of seasonal vegetables is also included. Dal Bhat is eaten twice daily and is a staple food of the Nepalese. 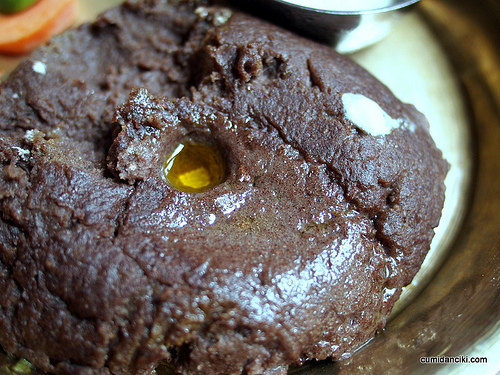 This brown “substance” may look a little like something a cow would leave in the field, but really it is quite a harmless “boiled cake” made from wheat or millet being boiled down. This stodgy lump is actually a cheap stapel for the poorer nepalese people. Not the most pleasant texture, but when smothered in butter ghee and dipped in curry its quite palatable.

Nihari is one of two national dishes in Pakistan, the other being Biryani (Meat and Rice) and I think we’ve seen enough photos of meat and rice already… 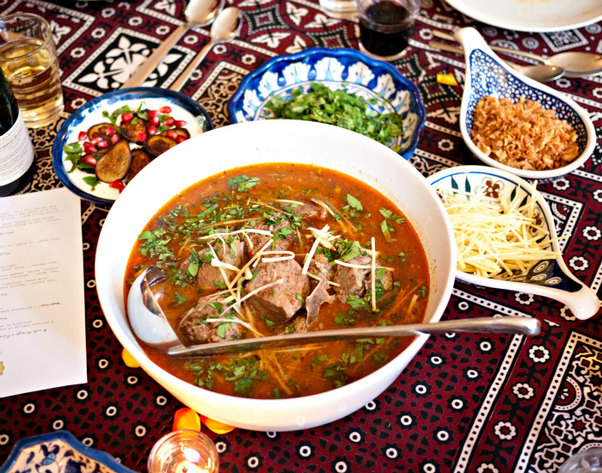 Nihari is a sort of curry soup, featuring flavours of black cumin, cardamon and cloves and served with a selection of condiments. If you want to turn this national dish into a more unusual fare then it can be served with a portion of brains and bone marrow on the side. Originally a dish from Delhi, so many chefs moved to Pakistan when the country was first formed that this became regular chow all over the country. 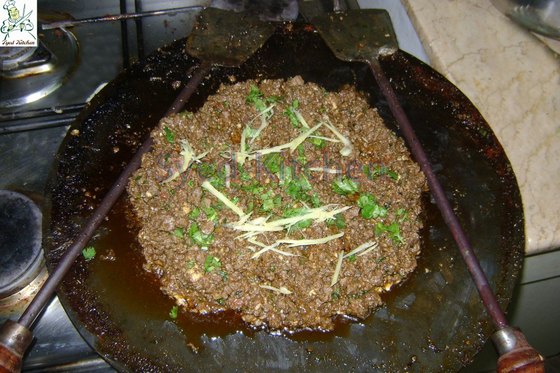 Hello offal my old friend… Being as you can have a side of offal with the national dish, it comes as no surprise that you can also feature said offal as a main course. Kata Kat is a mince of lamb heart, kidneys, brains and testicles, boiled together and then fried with spices and herbs before the chef uses his chopping spatulas to mince up the meat. 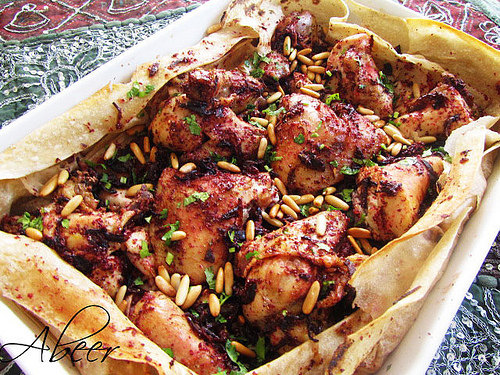 Musakhan is chicken spiced with sumac and caramelised onions and served on a flatbread covered with pine nuts.

We couldn’t find a unique strange food for Palestine, please leave comments if you know of one! 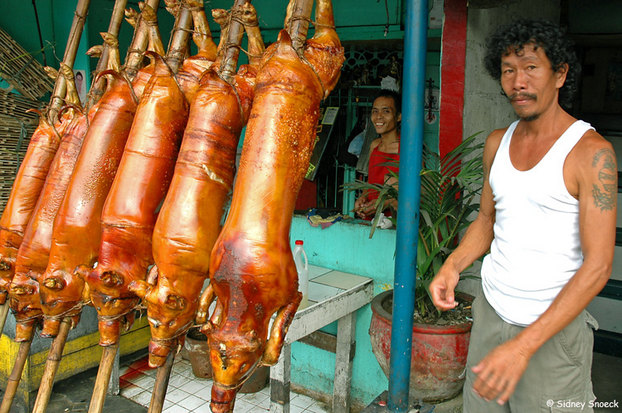 A whole suckling pig roasted over charcoal. This dish is seen widely during special occasions, festivals and holidays.