My Homeland: Growing up in “The West Country”, UK

When you grow up somewhere you don’t always appreciate what you have. It’s not until you travel that you can look back and realise all the great things your birthplace had to offer.

In this BLOG I’m going to briefly outline the best about “The West Country living” in the UK (Bristol, Somerset, Devon, Cornwall, Wiltshire, Dorset) on this, my most recent trip back home to England.

I spent 19 years growing up in the smallest city in England: Wells, Somerset. When I was born in 1982 the population was around 8,000 so the only reason it could be classed as a city is because it has a Cathedral. Wells has recently been, unknowingly, brought to public attention in the movie “Hot Fuzz” where the vast majority of the outdoor location shots were filmed there, even though the characters in the film claim to be in Gloucestershire! The director of the movie, Edgar Wright, actually grew up there and attended the same school as I did.

Historically Wells was an important religious centre and the grounds behind the cathedral are home to the Bishop of Bath & Wells. The Bishops palace is walled and surrounded by a moat (homing a family of swans), the whole complex is in great condition. Some of the most exciting events on the annual calendar take place here including the “duck race” – featuring hundred of plastic numbered ducks with locals hoping to get their number make it to the end of the moat first! Also, the boat race where people who have built there own make-shift aquatic vehicles race against one another.

Take a 20 minute drive from the city and you’ll get to the site of the world famous Glastonbury Festival, for which local people get good discounts, and sometimes free tickets if you are in the know (I went 5 times in my youth). Get there soon as there are endless rumours that the festival will not be running for much longer.

45 minutes drive to the east is the Roman city of Bath, famous for having one of the best preserved ancient bathhouses in the world. The city was established around about 60AD – so it is pretty damn old! 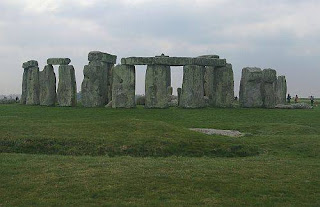 Close to here is yet another world famous site “Stonehenge”, which needs little introduction! Sadly as I child, I didn’t appreciate this ancient site as I would now, and of course, now it is overrun with tourists and you can no longer get right up to the stones like you used to, instead of being restricted to a walkway around them.

Not far from Stonehenge is another, lesser known, site: Avebury. The standing stones here are arranged in what seems to be rather haphazard way compared to Stonehenge, but at least they are not fenced off and you don’t have to deal with the hordes of tourists. I’m sure the design has some reason behind it, it’s just a little harder to see at Avebury.

To the North is Bristol, the largest city in the Westcountry… Bombed extensively during world war two, many of the historic buildings were destroyed but there is a fantastic student bar scene and massive nightclub district if that is your thing. Home to one of the most respected civil engineers of all time, the man with the unusual name: Isambard Kingdom Brunel. Amongst things Brunel related in Bristol, you can take a walk over the “Clifton suspension bridge” which, when built in 1831, had the widest span of any bridge in the world! Also, visit the first another of his engineering projects: The SS Great Britain, which was the first Iron Steamer to cross the Atlantic (in 1845 taking 14 days).

To the South, Lyme Regis & Bournemouth, South coast beach resorts. If you are from a country with amazing beaches (like Australia) then don’t get your hopes up! But the one thing to be said for this region, unlike further east to Brighton, is that you can find sandy beaches! But the water will be cold even in the summer – so do as the English do and “Suck it up”, its cold but you get used to it! Lyme Regis is a quaint old town, great for families. Bournemouth is a small city and better for clubbing and partying.

To the west of Somerset west is Devon. My two favourite attractions here are the Linton & Lynmouth cliff railway and a Devonshire cream tea (forget the tea, its the cream and scones that make this a must do experience).

The railway is not only old but insanely steep! Powered by water and gravity in a very clever yet simple system, the little rail cars move up a gradient of 58% (30 degrees) – which to give you an idea is the sort of steepness that you would need a good quality 4×4 vehicle to get up, and this railway opened in 1890!

As for number two on my list, The cream tea is a winner because in the Westcountry we have something called clotted cream. If cream you have eaten in the past is not specifically called “clotted cream” then you have never experienced the closest thing to cream heaven that exists… It’s unbelievable! Its somewhere in between whipped cream and butter, you can feel yourself putting on weight as you consume, but it’s divine! It makes me sad that it is so hard to find outside of the UK.

Even further west you arrive at the far tip of Great Britain: Cornwall, which boasts the best beaches in the UK, with Newquay being internationally recognised as a surfing hotspot… you’ll need a wetsuit though, its freezing water most of the year! Newquay has become a little tourist infested over recent years, especially during the summer months, expect a lot of shitfaced little Englanders on their summer holidays.

In the off season, you can expect a much more peaceful experience, but also rain… a lot of rain… but after all, it is the UK, so expect rain ALL the time, we do!

VERDICT
When you look at it there are plenty of cool and fun experiences to be had in the south-west of England (The ancient kingdom of Wessex) and I’ve barely scratched the surface, especially if you are on a short trip and have a car to get around (public transport is a little unreliable I always found – expect one bus per hour in rural areas, and don’t expect it to turn up for sure at all). Its a slow pace of life, which might be a welcome reward if you have been following a hectic road trip schedule around Europe.

Don’t expect to be wowed by sophistication, its old school classic UK at its best and the people are generally pretty happy and friendly compared to somewhere like London! Grab yourself fish and chips by the seaside and try and understand the local accent, most of all Relax! It’s what everyone else will be doing.