The second most interesting wall in the world, Dubrovnik, Croatia. 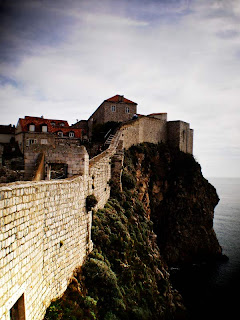 It may not be visible from the moon (although that is just a myth about the great wall of China too!!) and it may not span the width of a country, but what it lacks in size it more than makes up for in character!
Five Dollar Traveller spends a day walking around the walls of Dubrovnik in Croatia and then soaks up some ambience hanging out in this well preserved, UNESCO listed ex-city-state.

Walking into Dubrovnik is certainly one of those time travel experiences which only genuinely happens in few places in Europe. Much of the city was re-built after an earthquake in 1667, so many of the buildings you see are from after that era, but that is still plenty old enough to get that real sense of history. Its really comes down to the fact that everything meets that historic standard, there are no modern buildings, that is what makes it believable this is living, breathing time capsule.

The priority was taking the walk around the walls. If you don’t like steps and uneven surfaces… just do it anyway, its a photographers playground, get up there and start snapping! The Fortress opposite the city is perched precariously on the cliff, awesome (above)!
Its about a 2 KM walk around, but you might as well take your time, you’re not paying by the hour!
After walking the coastal side you go past the harbour (left corner of the photo on the right) and then along the inland wall to the highest point where you get a great view of the city – and the basketball court, very medieval! You feel a bit weird because you are sort of spying on people’s everyday lives, someone putting out their laundry etc. Its a tourist city, but it is certainly lived in!
Keep going to complete the loop and you make it back to the main city gate and can head down to the main street “Stradun Street”. This wide corridor runs straight as an arrow from one end to the other and is always packed with tourists… a little unavoidable for a tiny city which is fuelled almost entirely on tourism. Fortunately Dubrovnik is one of those places that is so enchanting that the endless tourism can be comfortably endured, it must be tough for the locals who live inside the walls though!?

There is a good selection of restaurants and bars hidden around the city, we headed to the harbour at the south end and grabbed ourselves a table. Croatia has throughout history been heavily influenced by Italy and this seemed ever present in the food options… still, of all the countries to be influenced by in the kitchen, Italy is a good choice!

Dubrovnik is one of the many city-states that were so prevalent in European history. From choices amongst Venice, Barcelona and many others, Dubrovnik comes across as a better example simply because of the walls which no longer keep invaders out, but instead hold the history in.

– Entrance to the walled city is free. To walk around the walls will cost about $11 (2012). Some of the other historic buildings also have entrance fees, but the Walls seem to be the most expensive attraction. Allow about an hour to walk these at a leisurely pace.

Looking for hotel options in Dubrovnik? We recommend HotelsCombined. They have a great selection and help you get the best possible price!