Where can I see wild orangutans in Borneo? (Hairy Orange version of me)

Where to See Orangutans

We are in Sandakan, Sabah, the north-east corner of Malaysian-Borneo at the Sepilok Orangutan Rehabilitation centre. The centre helps injured and orphaned Borneo orangutans get back to health and slowly re-introduce them into the wild.. expect amazing pictures and a few sad stories when you venture into the wilderness that is Borneo!
After a delayed flight we took one of the most insane taxi rides ever (and I’ve been to Mexico!) to our Jungle hut lodgings near Sepilok. Although I had advised by email we were going to be late, the whole place was locked up when we got there at 11pm. After scaling the gate and walking quite a way up the jungle track in the dark I realised I was not achieving much. Fortunately by the time I made it back to the taxi Megs had got them on the phone and they were sending a car to the front gate. It had been a long day so we just headed straight to bed.
In the morning we got the chance to assess the situation. It seemed like quite a nice place, we got eggs for breakfast included and the wooden hut we were staying in was fully air-conditioned and with a shower that was open to the huge expanse of jungle behind.
The hotel “Paganakan dii” (Way too touristy, but good location and an alternative to the Sepilok Jungle Resort which seems to have a bit of a hold on the market) had a free bus to the Sepilok Orangutan Sanctuary (about 10 minutes away) so we headed down at 9am. 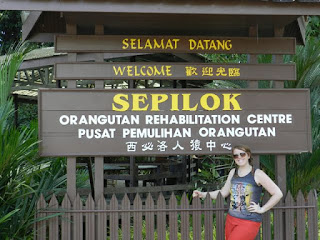 The Sanctuary is an orphanage that rehabilitates the orphans so they can be re-introduced into the wild. 30mr ($10) buys you an entry ticket (plus 10mr/$3.50 per camera) that gets you into the viewing platform for the morning and afternoon feeding time (10am & 3pm), don’t be late! the orangutans don’t have watches! When we were walking along to the platform at 9.55am one of them was climbing in front of us, and there were others already near the platform.
Don’t be mistaken, these apes ARE wild, but they are all familiar with Humans and not scared off easily by us. The feeding platform is man-made, but it is set in the middle of the jungle and the apes are free to go wherever they like. They only come back because the ones in this area are the ones who are more dependent. Many of the other Orangutans that were rehabilitated never come back this close to humans again. 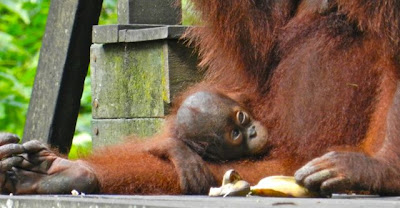 We were very lucky when we were there that one of the mothers had just had a baby (12 days old! See the opening blog photo at the top of the page). The one in the photo above is much older, 1 – 2 years. They stay with the mother for 6 to 7 years. 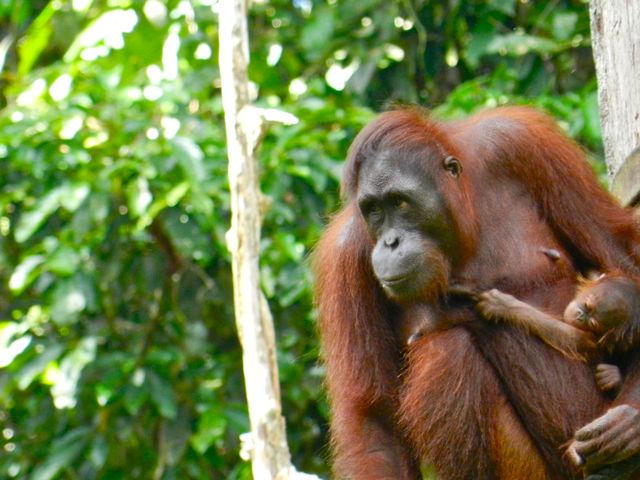 We were even more lucky that we came to both the morning and the afternoon session, as the afternoon session was very disappointing compared to the morning – which was amazing! The Wiki travel guide advised to avoid the crowds of the morning and go to the afternoon… lucky we ignored that advice! The afternoon session was even busier, full of noisy kids, and only one Orangutan showed up and she faced away from us the whole time (plus another one as we were leaving jumped onto the walkway). Still, ok, but nothing compared to the morning.
When you are dealing with wild animals, there is a lot of luck involved, so just keep your fingers crossed and try not to go during school holiday times.
This taught me a lesson that the Wikitravel guide is no more reliable a source than any blog such as this one here. Although it is presented as an informed and organised travel guide, a lot of the information that I used to plan our trip was hit and miss, I suggest using more than one source when planning a trip just to be sure, that said, plenty of the wikitravel info was useful and accurate. If you have the time, come to both morning and afternoon sessions at the centre to avoid missing anything. There is also a museum and a talk regarding the charity that supports the centre – both definitely worth a look.
VERDICT – where to see orangutans
Entry to the park is relatively cheap ($10 entry + Camera fee) and AMAZING… getting there is the tricky part. Public transport is an option if you have plenty of time and are ready for a serious adventure – this is Borneo, its pretty wild! The cheapest “Easy” option is Air Asia (KL) or Tiger Air (Singapore or Manila). Budget flight to Sandakan from KL, and then its an $12 taxi ride out to Sepilok. Alternatively Take a flight to Kota Kinabalu (many more options to do this) and take the 5 hour bus with optional stop off at Mount Kinabalu national park.

Although there are a few other things to do in the area, the Orangutans are the key element. If you are an Aussie you might have some interested in the 2nd World war Death marches, only 6 Aussies, out of thousands that were marched, survived… grim.

And get ready to sweat! The humidity is oppressive year round.

Want to visit the Orangutans but not certain about visiting Borneo on your own? Why not try an Intrepid Travel tour – they have some great itineraries in Borneo.

Fun: 9/10
Budget: 5/10 (only because of the cost of getting there)
Fun:Budget Ratio:
9:5 – Worth the moderate expenditure, especially if you get there on a dry day when the stars of the show bother to turn up 🙂

Looking for hotel options in Sepilok? We recommend HotelsCombined. They have a great selection and help you get the best possible price!