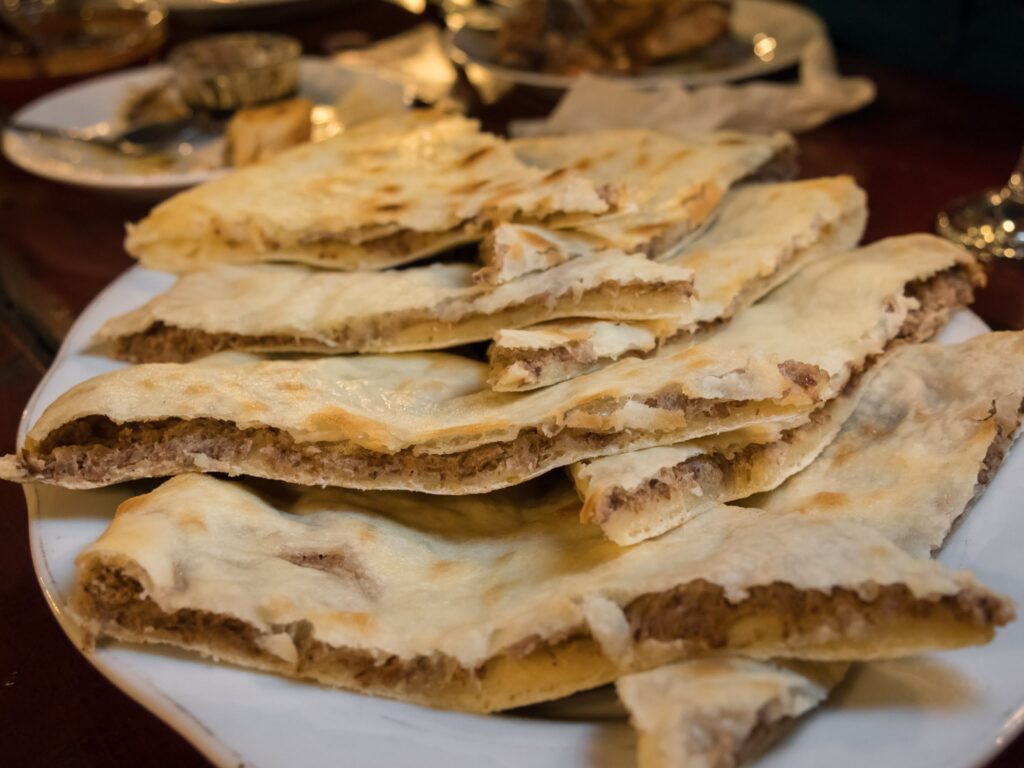 Not exactly a Christmas celebration but some areas consider this day as a ‘day of destiny’, and however you spend this day will determine your following year. It is a day to bake and eat Lobiani and to think about your past year and make plans to improve  the next.
The Great Martyr Barbara lived in the end of the 3rd century and in the beginning of the 4th century. According to legend, she was the beautiful daughter of a pagan, Dioscorus, who kept her guarded in a tower to protect her from harm. When she professed Christianity and refused marriage, he became enraged and ordered her to be tortured and beheaded. While she was tortured many miracles happened where her wounds were healed etc. even after her father beheaded Barbara, he was then struck by lightning on his way home and his body was burned by a flame.
I also read in one blog post that for Georgians the name reminds them of “Borbali” (Georgian word for “wheel”) and it was associated with a circle, wheel, flames, the sun, etc. So in people’s belief, Barbale was a goddess of agriculture and cattle-breeding and she provided people with a good harvest and many products, and the cattle fertility as well as human fertility.
So not exactly Christmas….but along the lines of many days where Georgians try to have a good day as it will reflect the year ahead.

Nothing – nadda – zip.  While today you can find many foreigners that celebrate Christmas in Tbilisi on this date organising lunches and get togethers, this date in Georgia is like any other day. Stores, Restaurants, banks, everything is open and its business as usual.  This year there seems to be a lot of places offering Christmas activities on this day – I guess catering to those celebrating away from friends and family, but in general this is just a regular day for everyone else in Georgia. 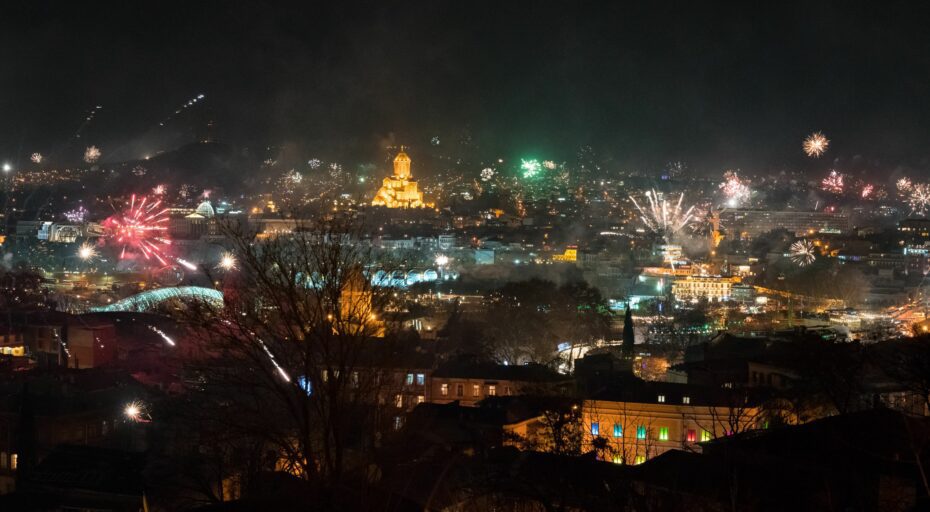 As I mentioned earlier most Georgians’ celebrate Christmas and give gifts on New Year Eve. So heads up it’s a tough night to find a babysitter. The night is celebrated by giving gifts and then having a New Years supra with lots of Georgian wine.  As the clock strikes midnight, the tradition is to make a New Year wish as the sky becomes ablaze with fireworks. This is not a planned fireworks demonstration but rather thousands of people shooting fireworks from their balconies. Yes, it’s chaotic. Yes, some people end up with fireworks shot straight into their apartments. Yes, there’s injuries. But I have to say – man it’s a fun night!
Following this is the very important tradition of Mekvleoba which is about the first person who enters the house on New Year’s Day. This person is called Mkvle which translates as “someone who leaves a trail.” While entering the house (right foot first) , a Mkvle throws sweets (According to the tradition, sweets represent youthfulness, happiness and prosperity) and wishes the best to the family stating “Shemovdgi fekhi, gtskalobdet gmerti. Fekhi chemi, kvali angelozisa,” which means: “I stepped inside, may God be on your side. My foot – trail of an Angel.” As this role is considered to be of great importance the Mekvle is usually carefully chosen beforehand.
Of course this is the night when a jolly old man visits the kiddies but here he’s a touch different to the Santa we know…but not by much. Considered a mythical creature in Georgia, Tovlis Babua also called the Snow Grandfather is just like Santa  who on the eve of Christmas comes down from the mountains with a sack full of toys and gifts. His home is Svaneti, a mountainous region in northwestern Georgia, specifically in the village Ushguli, which is actually the highest settlement in all of Europe.
Snow Grandfather is usually depicted as a kind old man, with a long white beard (usually almost reaching his toes) but lacking the coca cola red and white colours that we know best. Instead he is wearing a white Caucasian Burka (a traditional coat with high, squared-off shoulders) and a Svanetian hat (which is a felt hat that kind of looks like a bowl – but a hat).  Just like our supermarket Santa’s, the Tovlis Babua comes to Mtatsminda park and some other Christmas displays during the Christmas season where people can go and visit him, receive sweets, and tell him what’s on your pressie wishlist.
The New Year celebration in Georgia lasts for two days and the second of January is called “Bedoba”. “Bedoba” stands for “Luck” and therefore, the way you spend the day is believed to determine your new year. Georgians try to be especially happy on this day, it’s all about no negativity and just having fun! It’s a day to eat and drink your favourite food and wine with your favourite people in the hopes that your year will be full of these things you love most. 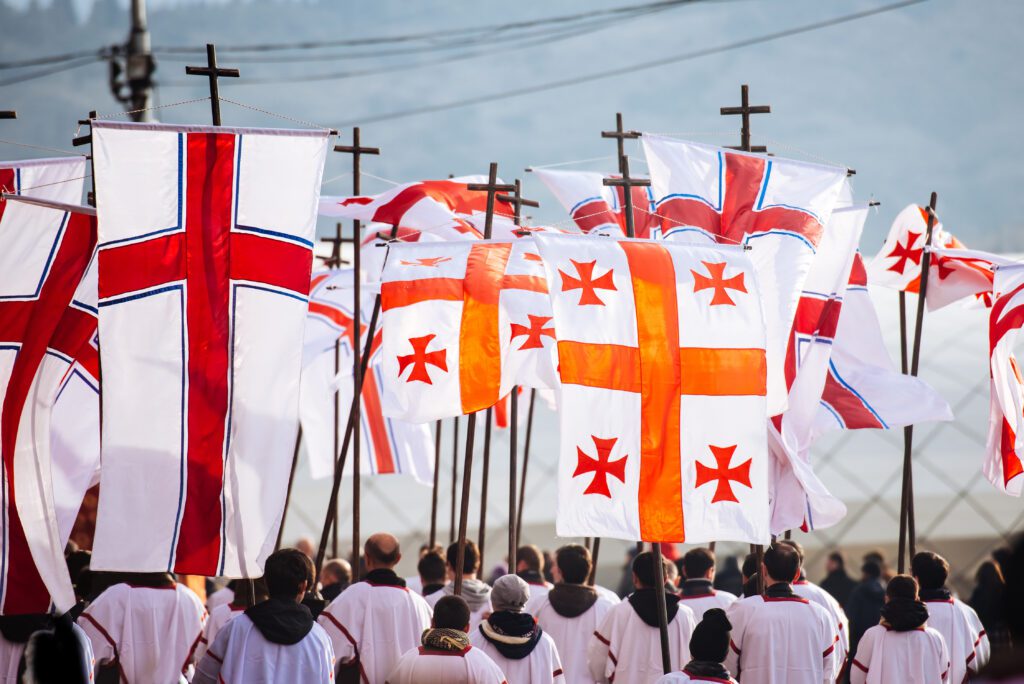 This is the more religious side of the holiday celebrations where on Christmas Eve Georgians light candles in their windows before midnight. A light for Joseph and Mary to find their way to shelter.  Also On Christmas Eve, every church holds a holiday service. The most prestigious mass takes place in Holy Trinity Cathedral in Tbilisi and is led by the head of the Georgian Orthodox Church, the Catholicos-Patriarch.
On the 7th of January is the day of the Alilo Parade. This happens in most cities across Georgia but in Tbilisi you can go and see it on Rustaveli street usually departing from Rose Revolution square about 1pm . People participating in the parade often carry religious icons, Georgian flags and crosses while singing Christmas carols. You’ll also spot children dressed up as angels and shepherds walking with the crowd while priests bless the crowd with holy water. As they make their way through the streets they collect gifts and donations which are given to orphanages, nursing homes and prisons. After the parade is over, many people often go home  for a family supra or visit their friends and family, and in the evening they light candles on their windows as a sign of the birth of Jesus.
Alilo is actually a festive song that is sung with a minimum of 3 people (true Georgian Polyphonic harmony style). Singers go to families homes singing this particular song  and the host will present the singers with an egg, a symbol of life and fertility.
It comes from the pagan tradition of “Chona”, a practice where masked groups would go around the settlement singing and receiving gifts from people. 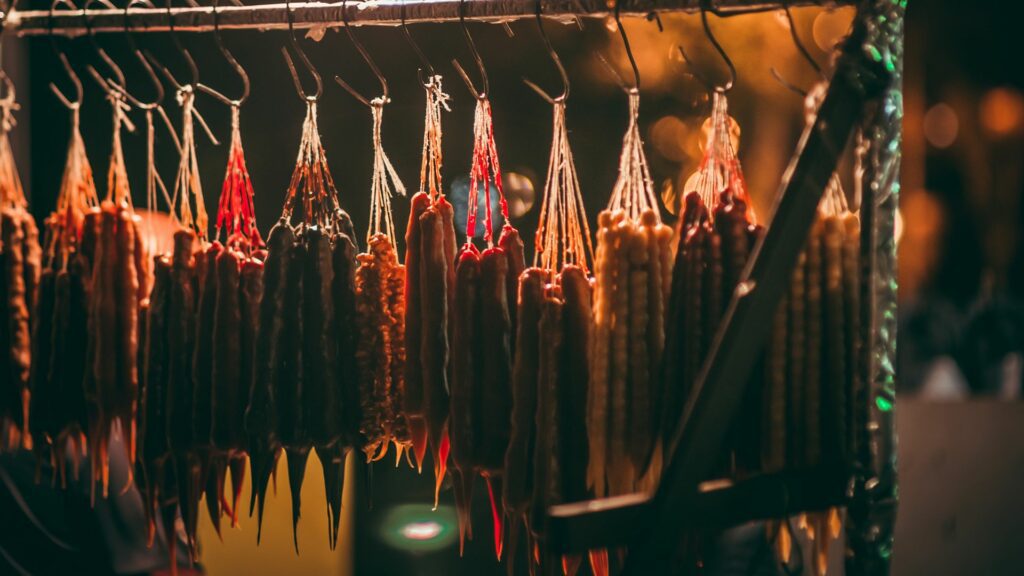 The reason NYE falls on the 14th is once again down to the Julian calendar. This day is not a public holiday and is not as crazy as the 31st which really is the BIG night of the year in Georgia. Some Georgians still celebrate the night with a Supra similar to the one they would have on the 31st with lots of traditional dishes – just on a smaller scale. There are some must have’s on the table if you want to celebrate New Year’s Eve in Tbilisi correctly:
Heads up – some people also take the opportunity to shoot more fireworks from their balconies…… cause why not! 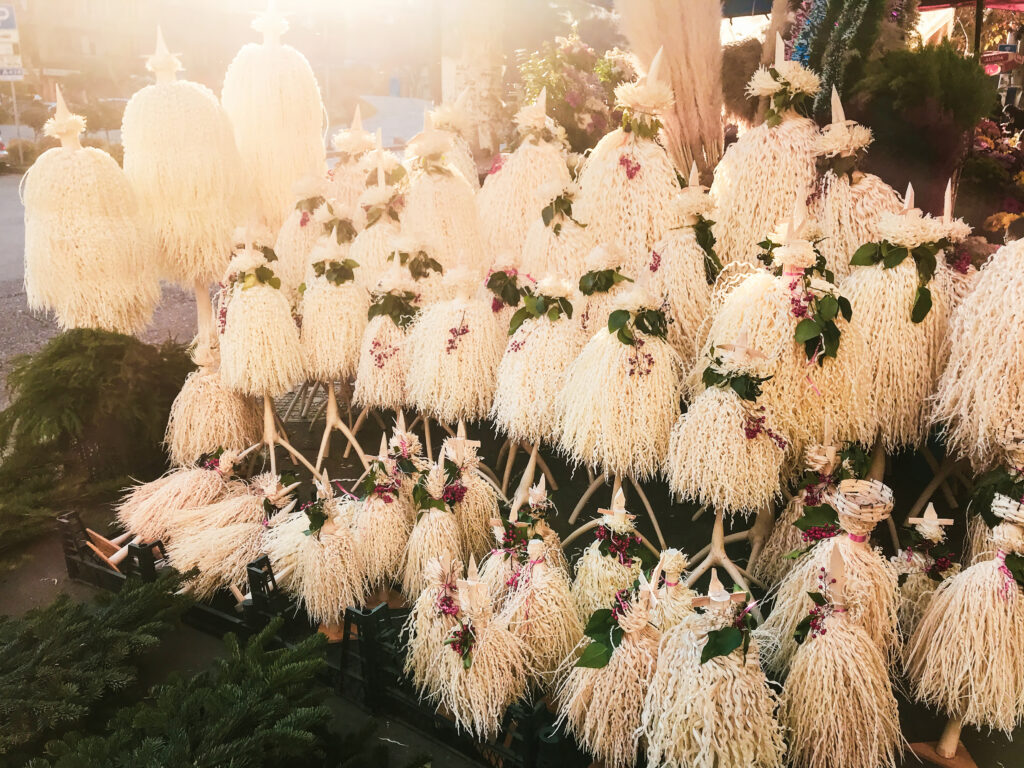 This date commemorates the baptism of Jesus Christ in the Jordan River by John the Baptist and is the end of the holiday celebrations in Georgia. It’s a popular day to go to church for a water blessing ceremony. Those who attend are sprinkled with holy water, which they can also take home and drink during the year. It is believed the holy water will aid in times of sickness or trouble, and believers can drink the water to ease their discomfort.
It’s also time to take down all of those festive decorations. But why pack away your tree when you can burn the tree!!!
One interesting thing you might notice on the streets around Christmas time is something that looks like a Christmas tree in shape but seems to be made of something like paper or dried wood. This is actually a called Chichilaki.
The Chichilaki is a traditional Georgian Christmas tree made from dried hazelnut or walnut branches. They vary in size, starting from a tiny tiny 20cm going to over 3m in height. The branches are carefully shaved to look like a coniferous tree and represents the tree of life, a symbol of hope for Georgians.
Instead of being decorated with various Christmas decorations, a Chichilaki is usually filled with various sweets, apples, berries, and pomegranates as an offering for a bountiful harvest. Some articles I read say they are ceremoniously burned on the day before the Georgian Orthodox Epiphany on 19 January others say on the 19th…either way they are set alight to symbolise the passing of the previous year’s troubles.
Things to Know: Many of these traditions were banned during the soviet times and have only come back as being a strong part of Georgian tradition since the 90’s
And after all that eating, drinking and firework madness we find ourselves at the end of the holiday festivities in Georgia. Keep an eye on Facebook events if you are looking for something to do during this season as there are plenty of activities and celebrations for young and old that you can join in on.