Kangaroo, emu, crocodile and even possum would be gracing our table for this one of a kind native Australian degustation dining experience in Brisbane, Queensland.

If you head to an Aussie pub, you’ll find that traditional Australian food is typically made up of a mixture of international cuisines. Most notably, British (Fish & Chips, Meat Pies, Roast Dinner). Search a little further and you can’t avoid sushi, Thai food and Chinese.

But Australian native food is completely different. It’s also remarkably uncommon on regular menus. Even in most modern Australian fine dining restaurants you’d be more likely to find lamb and beef, than emu and crocodile.

This is what is on offer at Tukka, Brisbane. Fine dining bush tucker degustation. 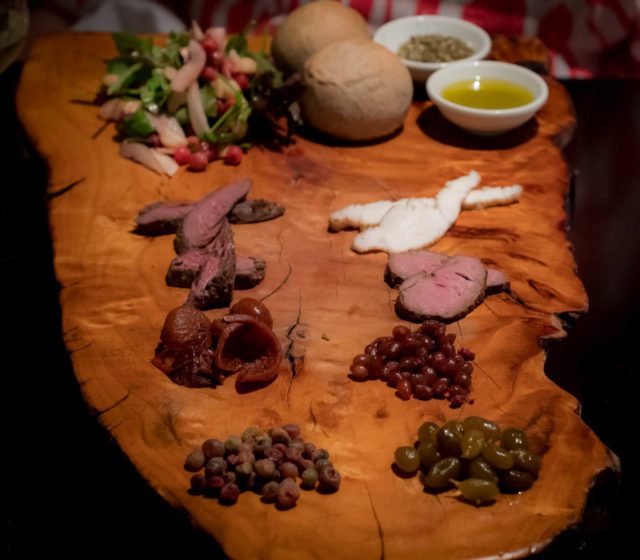 A selection of bush tucker berries, meats and damper bread

Imagine a bush tucker antipasto plate and you’d be pretty close to a picture of this first course.

Instead of fresh baguette, or ciabatta, you get warm, dense and delicious damper bread (traditional baked in the coals of your campfire). Instead of ham and salami, a selection of seared emu and kangaroo.

instead of grapes or sun dried tomatoes, you get muntrie berries (native cranberry), desert limes (Sharp, intense lime flavour) and glace lilly pillies (Sweet, but nothing like a glace cherry).

The simplicity of antipasto is enjoying the flavour of each element individually, or combining multiple ingredients together in an endless number of ways. Finding multiple new and exciting combos after only just trying an ingredient for the first time, is even more exciting a food experience than simply trying something new.

This many new tastebud sensations on one plate is like taking a trip to foodie paradise. 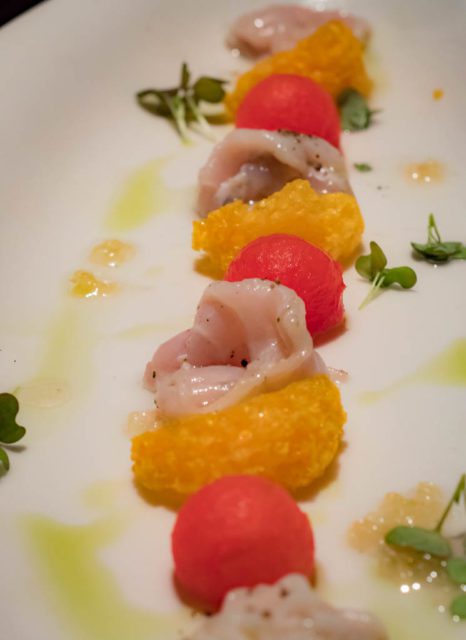 Crocodile Ceviche – A unique take on an native australian food

Have you ever thought of using crocodile to make ceviche? Nor had I.

Crocodile is actually a completely different animal from the alligators of North America. The best meat is in the top end of the tail.

As a ceviche it was surprisingly delicate. Meaty, of course, not fishy, and simply dissolves in the mouth. The freshness of the watermelon and unique crunch of the freeze dried mandarin added an unexpected element to the meat. 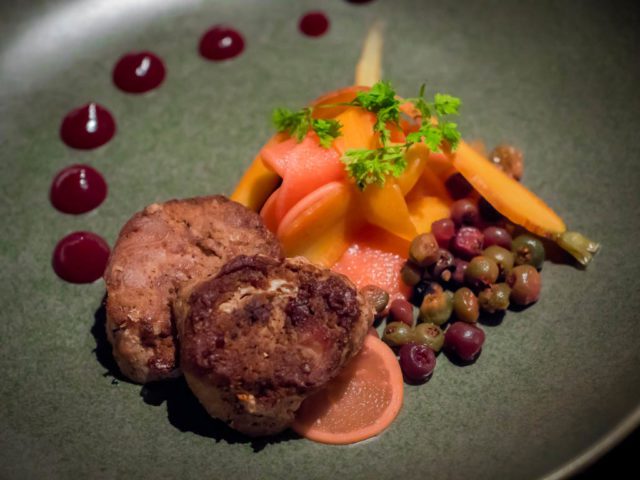 The possum was sadly the only dish that really lost marks. it’s a tough ingredient to cook with. The combination with an apple cider also goes some way to soften, sweeten and tenderise the chewy texture of the meat. The davidson plum adds and acid note. The chef even integrates pig fat to try and rescue the tough and muscly meat.

But, for food adventurers, like ourselves, simply ticking items off our unusual foods bucket list is enough to make it worth trying. It’s a brave move to serve something that may not sit well with diners, it’s not just an unusual food, it’s also a controversial talking point for animal lovers – serving cute and fluffy creatures.

Whatever your moral stance, having an item this unique on the menu got our attention. We may not be rushing to eat it again, but are glad we had the opportunity.

Australia’s iconic jumping marsupial lives in abundance in Australia. The meat seems to have this strange reputation of being cheap or tough, and is often used to make dog food.

However, having tried kangaroo many times, purchasing the fillet and cooking it correctly yields a texture comparable to steak. Slightly milder in flavour than emu (more on that shortly). We were surprised that we found the [LINK TO ARTICLE] Burleigh Brewing “My Wife’s Bitter” craft ale, a better pairing than the Dark Horse Cabernet Sauvignon.

Being served with Samphire – A native green, similar to a thin asparagus – the menu continues its meticulously well planned use of native ingredients. 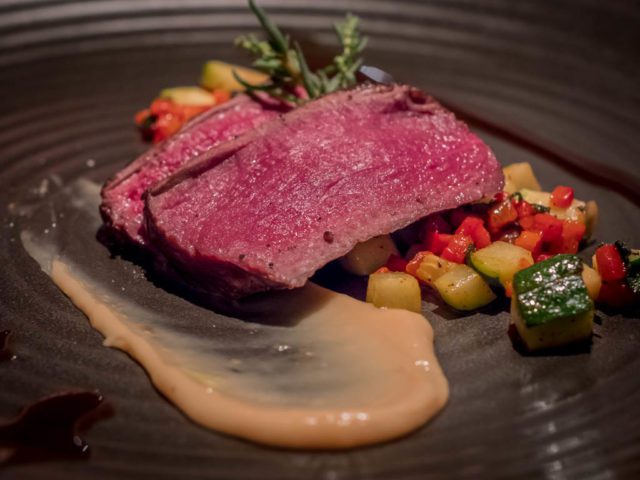 Emu is a native, flightless Australian bird. But the meat is nowhere close to typical bird meat. Darker in colour than a typical fillet mignon, and rich in flavour. There is a reason this is the last course. It’s a powerful, slightly gamey meat with hints of venison.

But really, it is a flavour all it’s own. So you just have to visit Australia and try it.

Like any good “steak”, pairing with a good shiraz is a win. Meat lovers will not leave disappointed after this dish.

You can opt for the 5 course great escape menu, like we did. Or the reduced 3 course menu that skips the emu and possum.

Both menus also include amuse bouche, dessert & palate cleanser. Drink pairings are available for every course.

Our chosen dessert; Strawberries with homemade ice cream, edible flowers and chocolate soil. That chocolate soil kicked a sweet punch, a perfect way to round out the degustation menu. 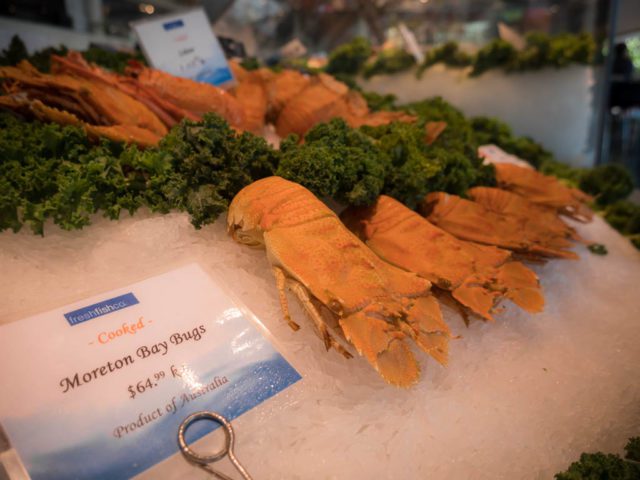 Cross between a prawn and a lobster – Native to SE Queensland

Another truly local ingredient in SE Queensland is Moreton Bay Bugs. A sort of evolutionary mishmash between a prawn and a lobster. It lives in a local bay, Moreton Bay. It’s completely unique to the area and very difficult to find outside Australia.

Of course, this seafood is not “bush tucker”, but we did feast on the Moreton Bay Bugs just over the road at Brisbane Brewing Company on a separate night.

Sourcing the sheer amount of diverse native ingredients in order to make this degustation menu possible must have been quite a task. You may consider the overall price a little high, but it really is a one of a kind foodie experience. If you order the drink pairing, you are getting full bottles of beer or glasses of wine for each course (including desert) – we had 6 drinks each for the full great escape menu.

Given the expertise and complications a menu like this creates, I think the price tag is completely worth it. After all, how many people in this world can say they ate 4 different Australian animals in one meal?

Sadly after 10 years business, Tukka has now closed it’s doors. They now offer specialist, private catering. You can contact them for more information.

For some other restaurant options serving bush tucker, see this article.

Looking for more foodie experiences in Brisvegas? Then check out some of the best food and wine tours.  Click HERE

Looking for somewhere to stay in Brisbane? Here’s a few of our favourite places to snooze!

Love this article? Why not pin it on your favourite Australia Pinterest board?

And don’t forget to bookmark the page for later. 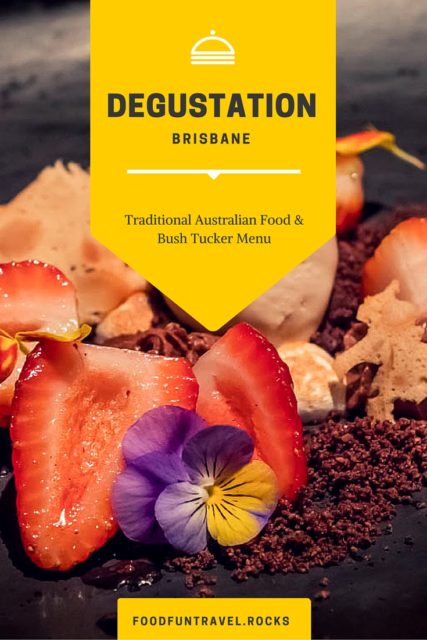 Disclaimer: This article contains affiliate links – thanks for supporting our blog by using them. We received the Tukka degustation dining experience for a special media rate. All opinions remain our own.