It’s time for some zombie food!

At some point in your life, as a carnivore, you’ve probably eaten brains. You might not have known about it. You might not want to think about it. But reconstituted meat, burgers, hot dogs… who knows what goes into them! If you are Scottish, you’ve almost certainly chowed down on some mind-meat.

There is a difference from eating brains ground with other meat and just eating a whole lump of sheep brains off a spoon. The main difference is that the texture of the latter is horrible!

In this episode of Tommo Eats Something Terrible I’m in Delhi, India. The brain may be curried up, but that doesn’t fix the texture. Watch the video and then read my verdict on Lamb Brains Curry below.

I’ve eaten some weird shit during my travels. Sheep brain is way up the grossness scale.

There are three major factors that affect how unpleasant something is to eat:

Lambs brain hits up the texture element as one of the worst textures I have ever consumed. I expected a little firmness, maybe due to having seen brains dissected on tv. Whatever they did to it in the cooking process, it is so soft that it’s a miracle it was still in discernible pieces in the bowl.

The texture sits somewhere between marshmallows and soup, or thin gruel. The difference is that although it has the mouth feel of slightly solidified soup, it still has some sort of permanence before it melts away. Like after you’ve brushed your teeth and not yet rinsed – a sort of drying pasty feel, maybe like accidently getting kids pot paint in your mouth.

The brain meat itself has quite a neutral flavour, or at least a flavour that has been well disguised by the tasty curry sauce. I’m sure this is a delicacy to some people. As brains go, and I haven’t made a habit of eating brains, it may be one of the better examples. Still, that being the case, it has not been a great advert for me to rush out and consume further grey matter from the skulls of the animal kingdom. 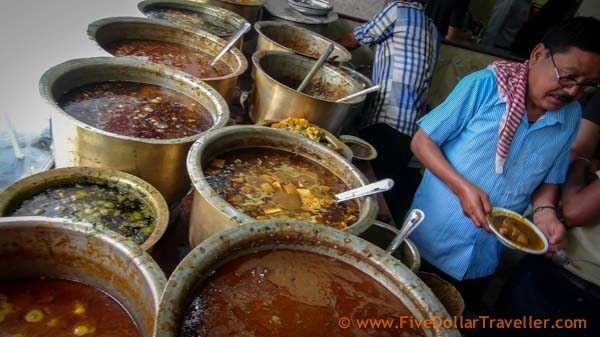 There are some concerns that eating brains can cause diseases in humans. So far I have not started bleating wildly in the night, so apart from assaulted taste buds, I appear to have come away from this experience undamaged. That said, eat brains at your own risk… Or as part of a zombie apocalypse diversionary cover story.

Where to eat Lamb Brain Curry

This is certainly not a popular dish that you can find anywhere. Kake Da Hotel in Delhi however, has a reputation for having served this lamb brain curry for many years.

The benefits of Kake Da Hotel are that it is very popular, reasonably priced but delicious (apart from brains) and they have a wide selection on the menu. This means that your friends will not be stuck with brain curry, they can enjoy one of the many other menu selections made from regular food. 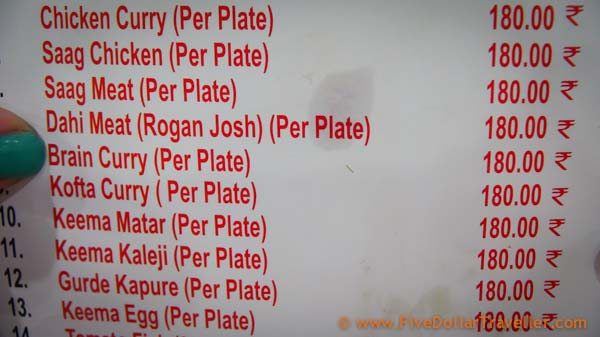 Brain curry cost 180 rupees (about $3.50) and there were other options on the menu for less (not pictured).

Some of these foods might not agree with your stomach – so please be careful and always have travel insurance in case you get sick. We recommend World Nomads as they’ve always had our back.