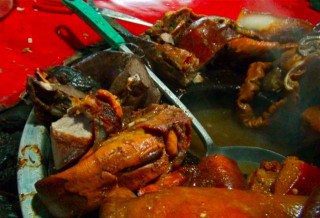 This strange looking street food option appeared at many day & night markets all over Burma. Especially easy to find in Mandalay and Yangon, we ran into this particular vendor, amongst many others, in Pyin oo Lwin at the central night market (4pm – 8pm).

The main part of the meal is a mix plate of pig organs and we’ve seen it served in two different ways:

1. Individual organ pieces on sticks and you dip them in the central steaming pot to warm them up.

2. Many large pieces of organ keeping warm around the hot pot. You point at the organs you want and the restauranteur chops little pieces off with his scissors.

The second option is the variety we tried in the end.

The selection of pig parts varies from stall to stall, but expect to see Liver, Intestines, Ear, Face, Heart, belly skin. We didn’t see brain, and apparently the Burmese don’t favour kidney (according to one guide we spoke to).

My little plate of piggy bits was 700 kyat (about 75cents) which included some very rich and meaty broth and a small dish of chili sauce. For an extra 300 kyat you can get a plate of cold noodles, which breaks up just eating a whole plate of offal!

As with any mix plate, some bits I preferred to others… Particularly partial to the Liver, not a fan of the intestines which had a very strange chewy texture and very little flavour. In some ways a good thing, after having intestines in France which actually tasted of poo!

Not a big fan of pig ears either, maybe if they were roasted and super crunchy but as a hot pot item they are soft, chewy with the occasional crunchy cartilage – not great.

I went back twice to the vendor to try different parts, not because I particularly loved the meal but just to have tried all his pig innards to compare them!

Would I go back a third time?? Probably not, it was an interesting experience but I’ve certainly had better offal in my life!

Did I get food poisoning? Nope, yet again the iron stomach stood up to the task. 100% record on street food in Asia – touch wood! 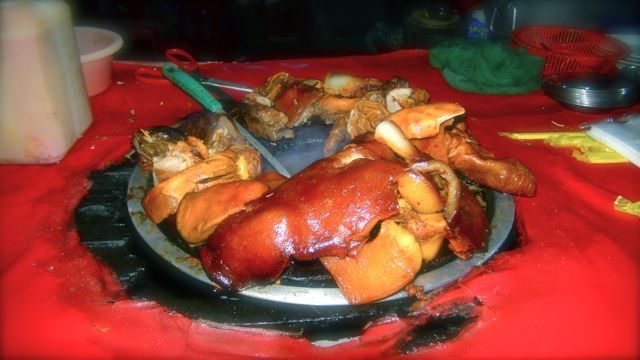 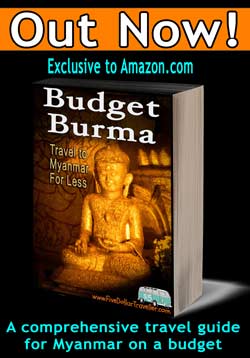