MEGSY EATS SOMETHING TERRIBLE: Yak Yoghurt. Get ready for super sour dairy suffering… If a yogurt-stomach-acid combo is your thing, then you’ll love this.

For those regular followers you’ll know we have a regular section called Tommo Eats Something Terrible. I thought that on this occasion I’d give him a break and run the gauntlet myself…

We decided to head to Xiahe, Gansu Province, China, for two reasons: 1. Wiki travel mentioned that there was a cafe that served Yak Burgers and 2. It also stated that this town was not very “touristy”. 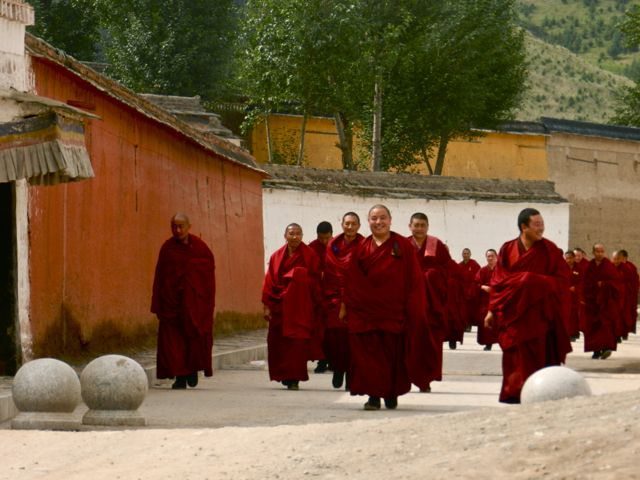 The “Yellow hat” monks at Xiahe’s monastery are rarely seen wearing their hats out!

It was wrong on Both accounts – I don’t know why we keep trusting Wikitravel, blerg. Although many people still get around in traditional clothes (which was actually really lovely to see) we found that the whole part of town by the monastery was hard core for the benefit of tourists, mostly Chinese tourists. We also have not been hit up by so many beggers in all of China as we were in this place. They were everywhere, even coming into the restaurants asking for money while we were eating.

Secondly: there was No Yak Burger, not even a Yak sandwich….you can get Yak pizza but this was priced at about 69 yuan or about $14 dollars, which is a bit out of our $42 a day budget. Also, yak dumplings or soup are common throughout the area, you don’t need to make a special trip to Xiahe to find them.

However, this is not a Wiki travel rant, this is a food diary…..

Always on the hunt to find and try local delicacies we spotted Yak Yoghurt and thought…..Sure, why not!

It was initially a little tricky to purchase from the vendor as we wanted to make sure that we were actually purchasing yoghurt! The picture on the front was just of a yak, but after previously having cream made from yak milk, amongst others, in Mongolia, we wanted to check it was in fact yoghurt as it was the thickest yoghurt we had ever seen!

We showed her the word for yoghurt that we had translated into Chinese on a phone app….she had no idea, we tried charades but that was a nightmare, finally a monk happened to walk into the store and after some more apps and charades he told us “yes yoghurt”. Honestly we still weren’t convinced but thought what the hell and bought it anyway it was only 7 yuan, a little over a dollar! We also grabbed a couple of bananas as well for extra flavour!

Time for the Taste Test:

You know when you’ve eaten something before (like yoghurt) and you have a subconscious idea of what it will taste like. You’re not even aware that you’re assuming it will taste this way until the thing you try does Not taste the way you think it should……and that first mouthful is like a slap to the face.

Let me explain it this way, It’s like the shock when you get offered chocolate and you expecting yummy Cadbury milk chocolate and they have in fact handed you Hershey’s and your taste buds go….woooah that not right! That’s what my first taste of Yaks Yoghurt was like.

Like I said earlier it is super thick and has a very sour taste, kind of a mixture of stomach acid and lemon juice with a hint of yoghurt somewhere in the background. You know when you throw up just a little in your mouth….kinda like that! 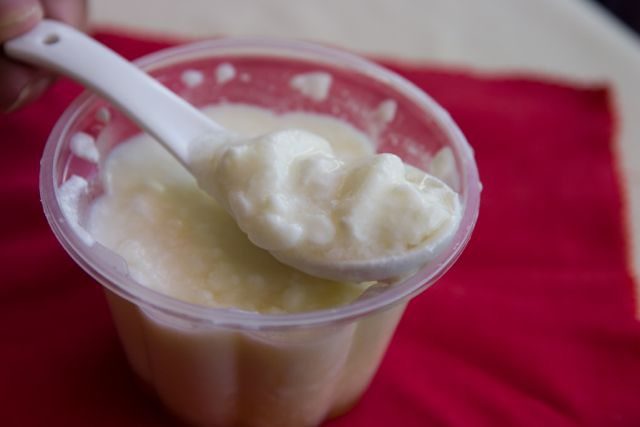 After that first taste it wasn’t as bad (this is not the case with Hershey’s… It is as bad as that first taste) but I’m not saying that its great. Thank god we had the bananas to balance out the flavour!

Now, we do know some people that quite enjoy the flavour of the yak milk products, and everyone should make there own opinion….give it a go see what you think. We are glad however to be leaving the land of yak and moving on to greener foodie pastures, where there is not a yak in sight!

Have you tried Yak yoghurt? What did you think of it?