There are a few things that Georgia is becoming known/famous for around the world 1. is khachapuri – in particular the adjaruli khachapuri which is a boat-shaped bread filled with cheese, butter, and an egg (but more about that in our food episode).  2. Georgian wine – Georgia is the birthplace of wine after all! But one thing that many people who are yet to visit don’t know about is the long and beautiful history of Georgian singing.

I can still remember the first time we heard this style of singing. It was 2016 and we were in a bar at about 3 am and suddenly a table of men in the corner just started singing. Their vocals made us stop in our tracks and listen as they all sang the most beautiful traditional tune in perfect polyphonic harmony. It – was – Magical!

Love consuming information in podcast form? Then check out our accompanying podcast to this article:

What is Georgian Polyphonic Singing?

Most music that we are accustomed to is defined by a melody line with chordal and harmonic accompaniment known as Homophonic music. Homophony has one clear melody line; the line that leads and that you most likely notice over the rest of the music. All other parts provide accompaniment or fill in the chords. So you have a singer, a backup singer providing harmonies, and other instruments providing additional accompaniment to add to and enhance the main melody of a song.

But in Polyphonic singing, you have more than one independent melody line occurring at the same time. Think of the cannons or rounds you used to sing as a kid in school – but give it a whole lotta practice, add some harmonies, and then turn it up to 11.

In Georgian music, this style of polyphonic singing is a very old tradition, even older than the introduction of Christianity in Georgia which was around the 4th century AD.

Georgian singers are generally male, though some female groups do also exist – although we have not encountered one yet. Even more rare are mixed-gender polyphonic singing groups but we have seen them here and there.

But, more often it will be men that you will see performing Georgian polyphonic singing. And the number of singers can range from three to hundreds of singers (for example at big traditional weddings). Traditionally, top melodic parts are performed by individual Georgian singers, but the bass parts are where lots of other people can join in.

Most songs are sung a cappella, which adds to the haunting beauty of the songs, but instrumental accompaniment on stringed instruments such as the “chonguri” (a plucked 4 string musical instrument) and “phanduri” (traditional Georgian three-string plucked instrument) is sometimes added. 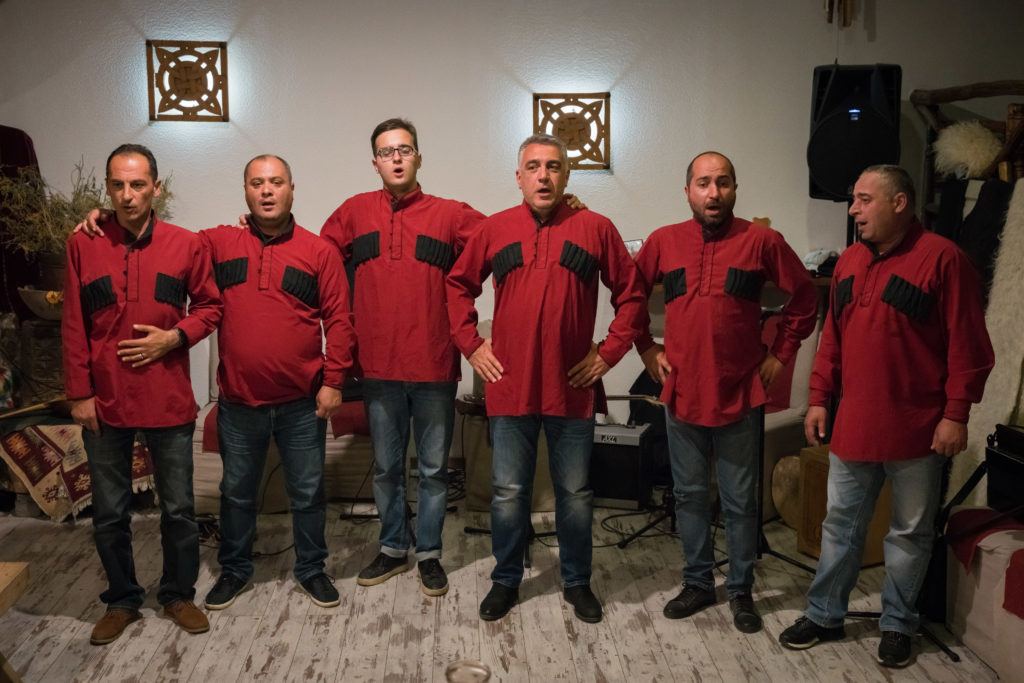 All these parts are still common in many Georgian music choirs, but they are not all needed for a song to be performed. The majority of songs today are sung in three parts: 1) Mtkmeli 2) Modzakhili and 3) Bani.

If this is all going completely over your head it might help that some of the Georgian names for vocal parts do translate into more traditional European styles that you might recognize such as: krini – falsetto, modzakhili – 1st tenor, mtkmeli – 2nd tenor, bani – baritone, and dvrini – bass. The remaining three parts: krimanchuli, gamqivani and shemkhmobari are specifically Georgian, and it is hard to find a comparison anywhere else in singing. 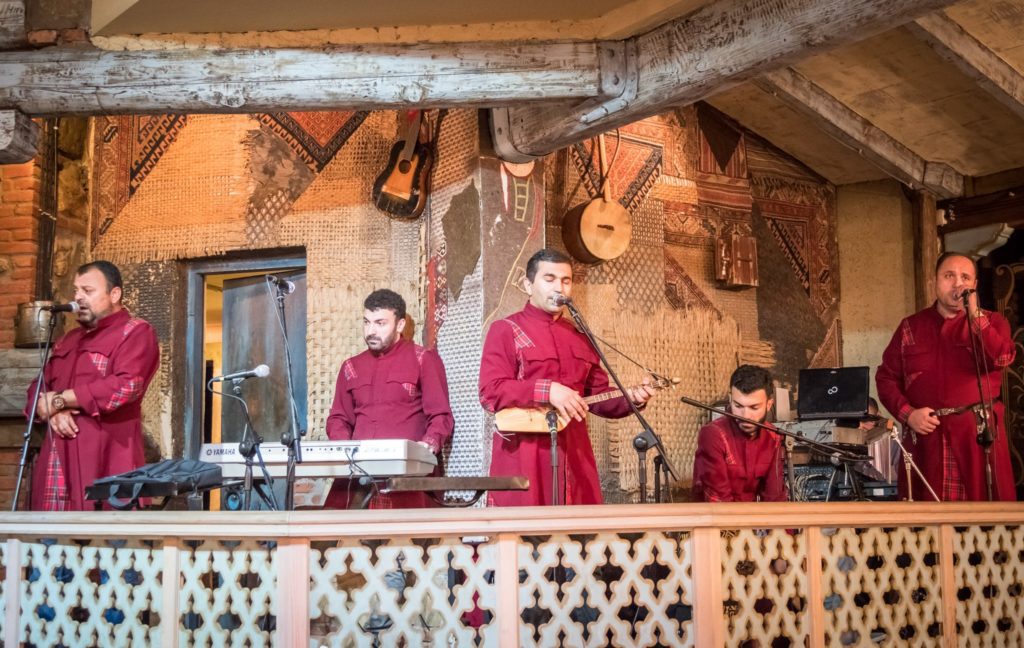 History of Singing in Georgia

Georgia’s rich and still vibrant traditional music is considered the earliest polyphonic tradition of the whole Orthodox world. For Georgian people singing has been inextricably part of their life from antiquity to modern era. Throughout time they have sung at home, in the fields during harvest time, at festivals and holidays, and when in mourning. Sources written by the ancient Greek historian Herodotus, even speak about Georgians going into battle with singing…..that was in 480 BC.

The basic themes of songs relate to work, family, love, happiness, friendship, etc. some of the songs are especially dedicated to the cultivation of the grapevines – it’s said throughout the country even today that while cleaning out the qveris (underground clay pots where the wine ferments – more on that in another episode) that the men sing while they work to keep themselves awake and you know that if the singing stops they’re drunk and fallen asleep.

The folk music of Georgia consists of about sixteen regional styles, known in Georgian musicology and ethnomusicology as “musical dialects” and because of this, there are considerable regional differences in singing styles throughout the country. Songs are both sacred and secular and are usually sung unaccompanied in a minimum three-part harmony.

Singing is also an essential component of Georgia’s legendary hospitality and comprises a major part of the Georgian feast also known as a supra. A supra can last for several hours and will include long beautifully spoken toasts, which are sometimes then followed by an appropriate song.  Georgian Polyphonic Songs include: “mushuri” – songs related to workers, peasants, and their life. “Supruli” – songs created for feasts. “Satrpialo” – songs dedicated to love and “Sagmiro” songs – epic songs created for heroes. Kakheti – the wine capital of Georgia is famous for many deep and full-sounding polyphonic songs all about wine.

But many Georgians just love to sing, so much that they don’t need the occasion of the supra to break out into song. As we experienced, and have done many times since then – you can be sitting in a pub or restaurant and a group of men will break out into song (it’s usually after a few too many wines or chacha’s – but who’s complaining – it’s beautiful to listen to and a thrill to witness)

Perhaps the most famous of Georgian polyphonic singing is a patriotic song from Kakheti Region “Chakrulo”, that was chosen to accompany the Voyager spacecraft in 1977 together with the collection of music from around the world.

Surprisingly (for me at least) During the Soviet period (1921–1990), folk music was highly praised, and revered folk musicians were even awarded governmental prizes and were given decent salaries. But at the same time, some genres were strictly forbidden (particularly Christian church-songs), but since the USSR’s collapse, Georgian musicologists have made an effort to collect and revive many of the songs from the past that have been forgotten.

One particular group The Rustavi Ensemble have strived since its creation in 1968 to bring Georgian singing to the world. Created by Anzor Erkomaishvili, a singer and folklorist from a distinguished Georgian musical lineage that goes back seven generations, the ensemble has successfully toured more than 50 countries around the world and their recording of “We Venerate Thy Cross” was even featured in a scene of the Coen Brothers’ film, The Big Lebowski.

Anzor Erkomaishvili was also paramount in recovering a great number of gramophone recordings of Georgian village singers that were made from the end of the 19th century to the beginning of the 20th century and re-issuing them on CDs. Despite the poor technical quality of the old recordings, they often serve as the model of high mastery of the performance of Georgian traditional songs for today’s contemporary ensembles to learn from.

Another notable singer we have to mention is Hamlet Gonashvili who is known as “The Voice Of Georgia”. He was a famous baritone and is loved by many Georgians for being the best interpreter of songs from the regions of Kartli and Kakheti. Hamlet was the soloist in the Rustavi ensemble until his untimely death, at the height of his fame, 1985.  He was picking apples from a tree and fell.

Where Can You Experience Georgian Polyphonic Singing In Tbilisi?

Georgian restaurant “Tsiskvili” is famous for its ethno-art band “Gordela”, formed in 2007. The ensemble offers guests a wide selection of melodies that can travel you back to the Middle Ages. Moreover, this band managed to preserve traditional musical culture in its original form. Folk polyphonic songs, performed by “Gordela” are full of spiritual nature and are considered as a real treasure for the Georgians.

In Tiflis hall of Georgian House, you can enjoy our Georgian music program everyday from 20:00 to 00:00 performed by quartet “Hangebi”, choreographic ensemble “Tiflis” and famous Georgian pop musicians.

Book a tour with our Ge

If you plan to spend more than 6 months in Georgia, then our partner ExpatHub.GE can help you open your business in Georgia, lower your tax bill, get residency and re-locate. Learn More At ExpatHub.GE