The below content is not a transcript or substitute for listening to the full episode. It is simply a companion and bonus material, as well as a link to some of the places we talked about in the episode.

The History Of The Fish Taco – Partial Transcript – Short Version

This is a brief summary of the history of fish tacos. Listen to the full episode above to get the complete story.

Fish wrapped in tortillas has undoubtedly been eaten in coastal areas of the Americas for a very long time. But the quintessential modern fish taco originated in Baja California on the north-west coast of Mexico.

This style of fish taco follows a standard form – battered deep fried or grilled firm fish, topped with a creamy or mayonnaise-based sauce, typically with the addition of a spicy element, like chipotle, and finished with salad – perhaps some shredded cabbage or lettuce, and a squeeze of lime. Then wrapped in a tortilla – often a flour tortilla, as corn was traditionally less available on the Baja peninsula.

Our initial research regarding the original creation of the Baja fish taco showed an ongoing debate between the coastal towns of Ensenada and San Filipe, sometime in the late 50s or early 60s.

However, I discovered some primary source testimony, where original owners of fish taco stands from the early 60s, and their children were interviewed in 2004 about how the fish taco evolved in the region. This source was only available in Spanish. But the level of detail and the sheer amount of named sources, compared to the other competing claim about San Filipe which is based mainly on the testimony of a few American tourists to Baja in the 70s – much later – suggest the Ensenada story to be the closest to fact.

It all started in The Mercado Negro – the black market – which operated from 1957 to 1967. Shoppers and vendors needed to eat, and the first fish taco was cooked up on site around 1960. Innovations such as frying and battering the fish, and adding a salad on top, came along during that period in the 60s as competition for selling fish tacos in the market grew.

Exactly when mayo or chipotle mayo was added as part of the dressing, is unclear, perhaps that was an addition from San Filipe that spread. But the rest of fish taco original history seems strongly grounded in Ensenada.

Other influences could include a wave of Japanese immigration to the region in the 1950’s, and that culture bringing methods for creating the light tempura style batter that is synonymous with the fried fish taco. The original battered fish may have evolved following local knowledge of those cooking styles.

We outline the full story of the Ensenada fish tacos, and how the fish taco mythology of San Filipe appeared, and how fish tacos became a staple in the USA, in the full podcast episode above. 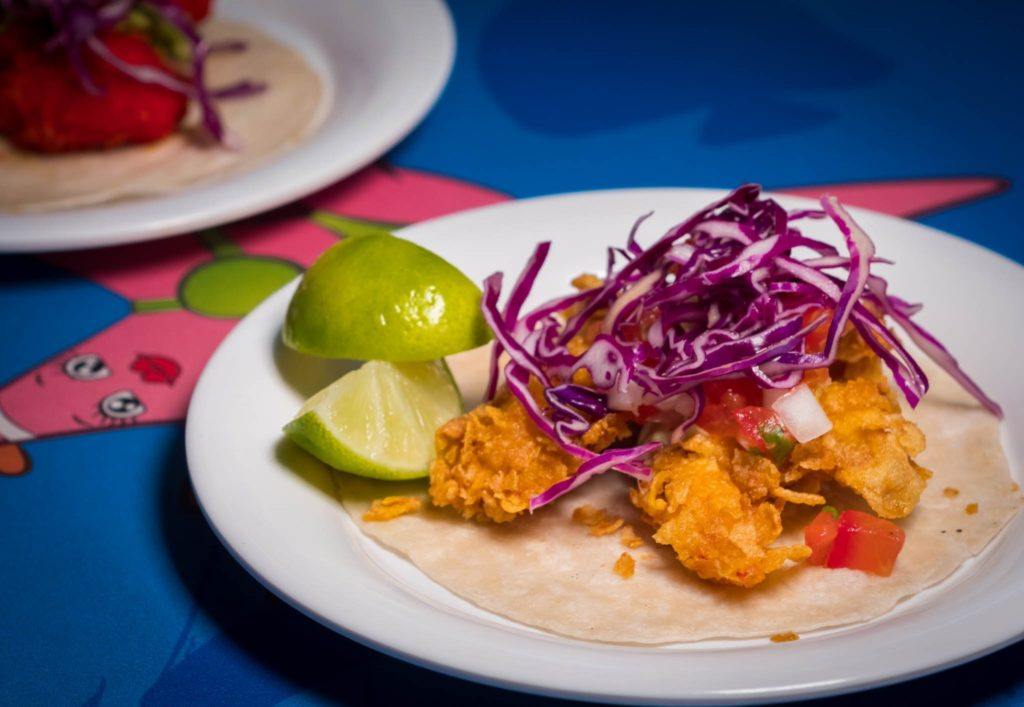 In the episode, we also visit the fantastic El Pez Gordo restaurant in Merida Mexico, where we eat some delicious cornflake crusted fish tacos.

I mention one specific Original Source In Spanish above, though tracking down the full story involved comparing this information with a lot of other testimony.

The Best Al Pastor Taco is not in Mexico City…

In our Mexico city article, we talk about our mission to try all the top-rated Al Pastor tacos in Mexico city… as recommended by locals and by international publications and other food bloggers. And yet, after all the research and testing, the best Al Pastor taco was not among those highly rated options.

It also isn’t at the often touted “El Fogon” in Playa Del Carmen – which has been listed by many food travel bloggers as the best and was even mentioned on Aziz Ansari’s Netflix show “Master of None”.

Although we are far from having tried all the pastor tacos in Mexico, we can rule out a lot of the main contenders as average (in our opinion) compared to our number one Al Pastor taco. 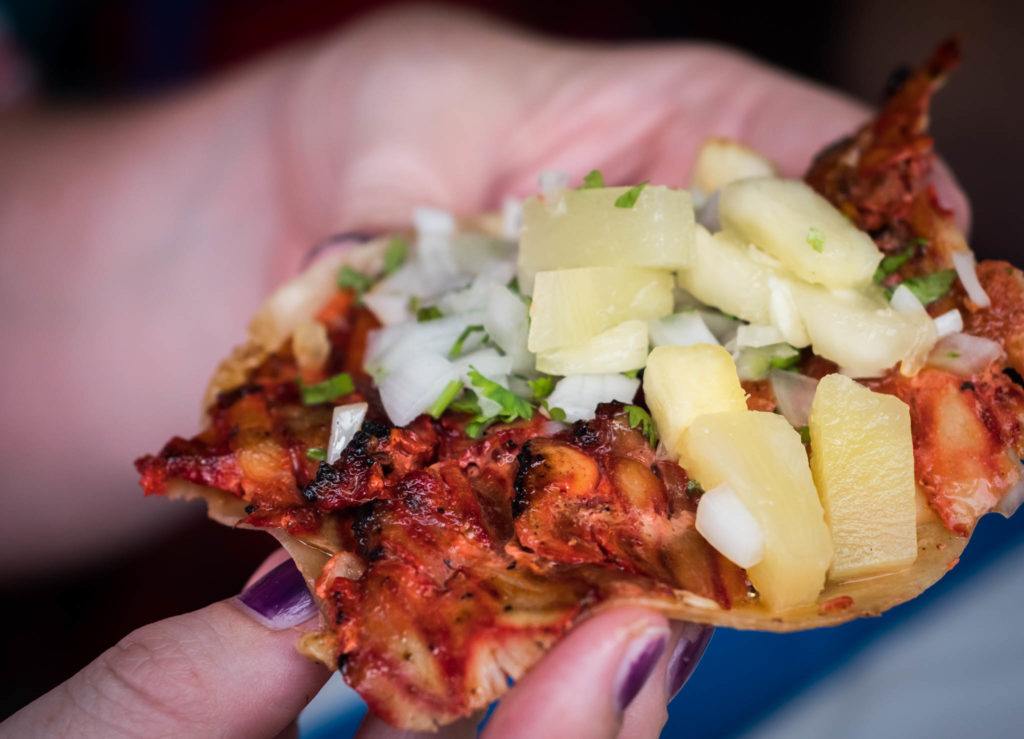 Our number one pastor taco is a Tacos Javis in Merida, behind the Lucas de Galvez Market. There are many pastor stores right there, but this one is selling more than triple the amount of al pastor than any of its competitors as it really is that good!

Why this is a great pastor taco:

Tacos Javis is a little tricky to find – If you are visiting Merida, get our Full Merida Interactive Google Map which has the exact verified location for this, and other restaurants we love in Merida.

Would You Eat a Uterus Taco?

Uterus is not the most appealing sounding food. Yet, if you ask many Mexicans, you’ll find they are quite happy to order a “nana” taco when they go for carnitas. Why else would it be on the menu at almost every carnitas taqueria?

When we arrived at Carnitas El Mexicano they were surprised to have foreign visitors – this place is way out of the centre of town, to the north-west of Merida city. They brought us out some taste tests – It almost felt like they believed we’d walked in by accident and they needed to give us some tastes to get us to want to order. As soon as I asked about the nana tacos, they whisked over a little slice for me to try before ordering. 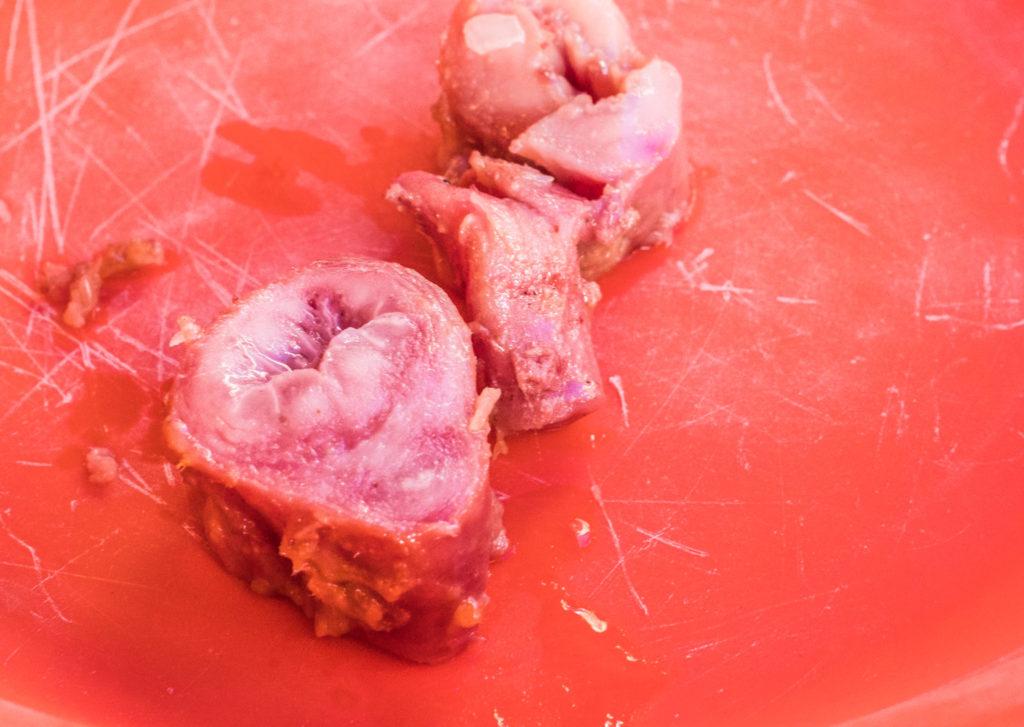 Uterus – It almost looks like it has little teeth in it…

The carnitas cooking method doesn’t look that appetising. With a massive vat of lard, filled with colanders of different pig parts, in the middle of the restaurant (some restaurants cook out the back though). 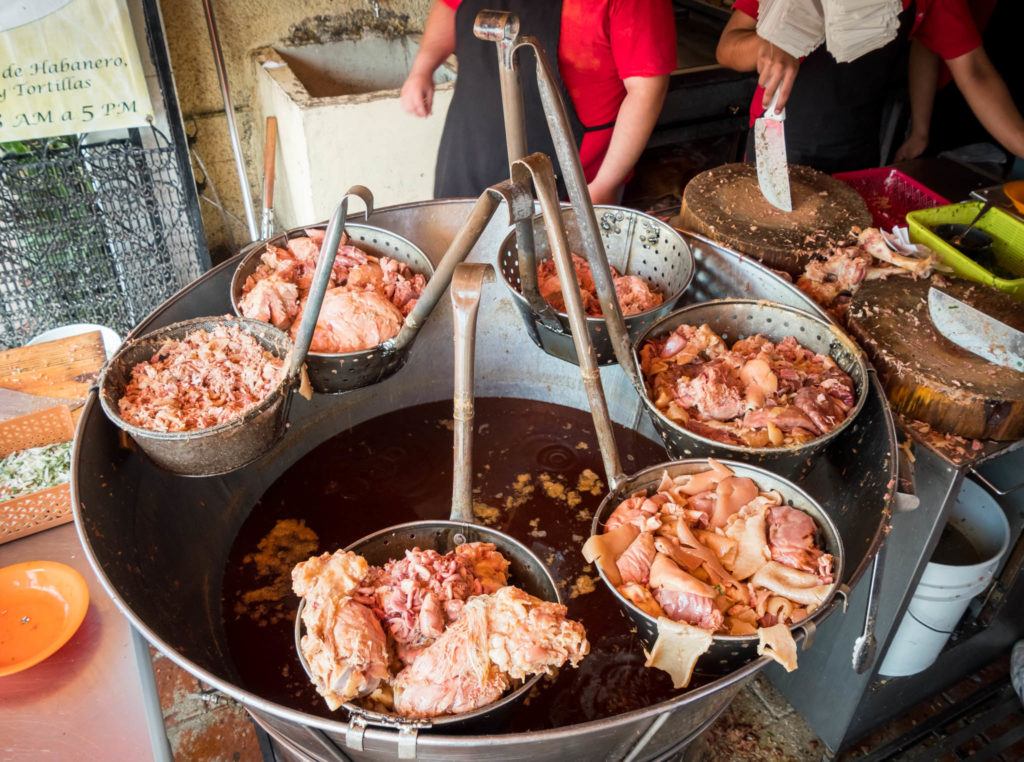 But the lard-soaked meat, once in a taco, is rich and juicy. Add a little lime and cilantro to cut through the fat and you are good to go. I decided not to go full “nana” as the flavour is strange and earthy. Instead, I got a mix of Maciza (the typical lean muscle cuts, like shoulder) with some nana (uterus) 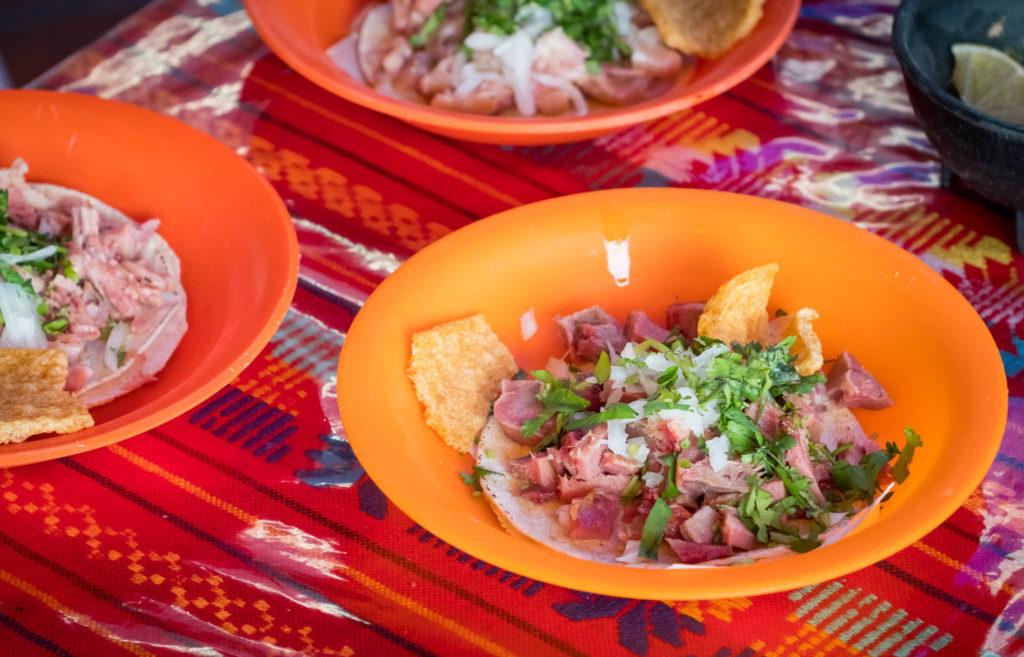 Links From This Episode

A History of Fish Tacos – A detailed account in Spanish

Original text from Bernal Díaz del Castillo – documenting the exploits of the conquistadors in the early 16th century.

El Huequito – Supposedly invented pastor, but their pastor lacks achiote and is not served with pineapple… It’s more like a proto-pastor that fills the gap between Tacos Arabe and modern Al Pastor.

El Tizoncito – The servings are small and overpriced, but the flavour of the meat was one of the best.

What Is The Dish Food Podcast?

Foods Of The World – A Travel & History Guide

“The Dish” is Light-Hearted Food Travel Podcast Which Uncovers The Stories Behind The World’s Most Famous (& Best!) Dishes – And What To Eat In Destinations Worldwide.

Join food travel experts Tommo & Megsy from foodfuntravel.com (Who have eaten their way through 90+ countries) and their expert guests, for tasty facts, foodie secrets and more! We even sometimes visit the destinations to meet the locals and eat the dishes, right from the source. Even when we can’t visit and record in person, almost every dish we describe is from a destination we’ve visited in the past to try.

* Early Access To New Episodes
* Patron only bonus Mini Episodes
* Increase our budget which = Better equipment, better sound & editing
* More Episode Releases – We can devote more time to making podcasts, rather than our regular blog business activities
* Our eternal gratitude & you can feel good that you are supporting the show you love!