Love consuming your information via podcast? Then listen to our Supra Episodes on the Tbilisi Podcast:

Food Fun Travel/Tbilisi Podcast is supported by its audience. When you purchase through links on our site we may make an affiliate commission. Thanks for supporting us by using our links!
—————-
The Russian poet Alexander Pushkin once commented that every Georgian dish is a poem.
And in this episode we will be discussing the history of the event where you get to eat soooo many dishes, while also toasting and drinking the time away with friends old and new…..the Georgian Supra.

What is a Supra? 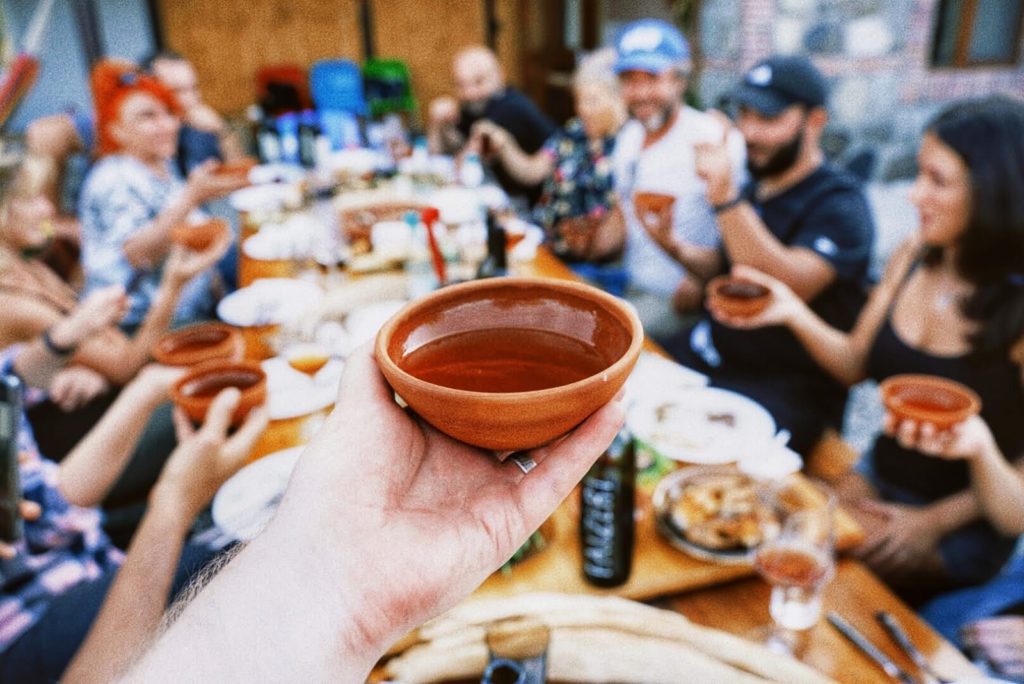 According to studentresearch.iliauni.edu.ge a student research portal in Georgia, The Supra is defined as a social institution, where through the use of alcohol and food mediums, as well as the institutions of tamada and toast, various social functions are performed, including entertainment, socialization, communication and establishing/strengthening connections between people.
To explain it in a very basic way – it’s a feast! But as we’ll discover, for the people of Georgia, is it so much more than just eating and drinking.
In Georgian, “supra” literally translates as “table-cloth” and also “the feast”. Basically if a Georgian says to you the word “supra” you know a party’s gonna happen. But, party is not the correct word really, because even though there will be food, and there will be drinking, and there will be fun, there is also a strict ritual to the event that needs to be followed by all in attendance. And it is the role of the Tamada to make sure the ritual of the Supra is followed.

What is a Tamada?

A Tamada is the toastmaster of the feast. All Supra’s no matter the size has a tamada. Sitting at a table at a wedding with 200 other guests…there’s a tamada. Sitting at a table drinking with a friend? One of you will be tamada!
It is the tamada’s responsibility to give the appropriate toast at the appropriate times throughout the event. The tamada should be intelligent, thought-provoking, and have a good sense of humor. They need to be able to tell a story but make it relevant to the toast they are telling and to the event at hand. They are in charge of how fast or slow the alcohol is being consumed, as after every toast the guests (especially the tamada) are expected to down their entire drink in one gulp – but on the other to act drunkenly or give the appearance of being overly intoxicated is considered shameful. This is why alcohol and food go hand in hand throughout the supra and the Tamada is like the ringmaster of the circus keeping everything under careful control.
Darra Goldstein – wrote in the book “The Georgian Feast – The vibrant culture and savoury food of the republic of Georgia.”
“Many first-timer visitors are unaware that the participation at the Georgian Table calls for the skillful exercise of moderation in the face of excess”
To give you an idea of how much wine is consumed, let’s just say it is common at a full length, all day supra for a Tamada to drink more than 3 litres of wine.
Traditionally the role is held by men with women taking control of the kitchen but today you can most certainly have a female tamada and we have certainly seen certain gender roles shifting when it comes to the supra. 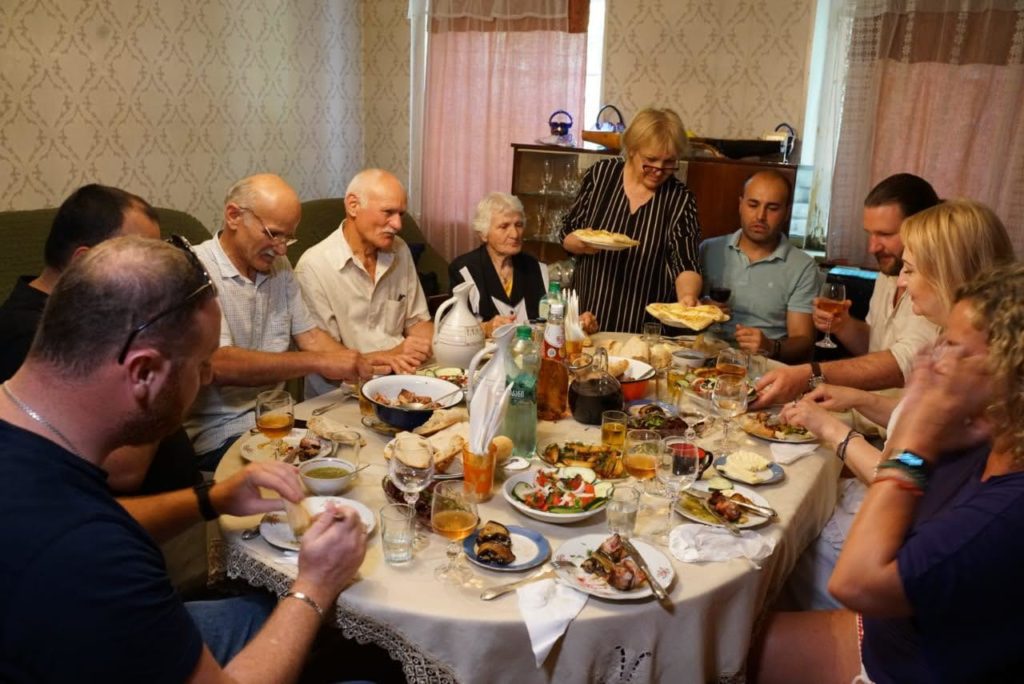 There are 2 formal styles of Supra: celebratory banquets (lkhinis suprebi) and mourning banquets (ch’iris suprebi) – as in funeral banquets.
Celebratory Supras are held to celebrate the things you’d expect: births, weddings, birthdays, during the Rtveli wine harvest, weekdays….I’m kidding. Celebratory supras are a fun occasion with many many many many toasts made by the tamada who will also tell jokes, and stories, and generally keep the flow of the party flowing nicely.
Mourning Supras are highly formalised and held on 3 separate occasions immediately after death, after 40 days, and one year later. Often for mourning supras guests will mostly only stay for the 3 official toasts by the appointed funeral tamada.
Guests after each toast will swallow their wine in one gulp, first uttering the words xsovna iqos (“May he/she be remembered!”). The total number of toasts given by the tamada must be uneven, so too must the number of spoonfuls taken by the attendants from certain ritual dishes that are reserved for the funeral supra and passed from hand to hand (k’olio, shilaplavi).
There probably will be more toasts made by the tamada throughout the evening but I have been told that many guests that are not immediate family or friends will exit after these 3 main toasts have been made.

==> Want to experience a Supra in Georgia?

Join us at Eat This! Food and Wine Tours. A tour company owned and run by Tommo & Megsy – the writers of this blog!

History Of the Supra

The thing I was surprised to learn after doing my research was that it seems that the form of the supra we know today probably was created in the 19th century.  Yep that recently! This theory is based on the fact that the word “supra”, “toast” or “tamada” don’t actually exist in any texts before the 19th century. Now, this doesn’t mean that Georgians haven’t been feasting and drinking for centuries….of course, they have! In fact, there is an old story that goes:
“When God was distributing portions of the world to all the peoples of the earth, the Georgians were having a party and doing some serious drinking. As a result, they arrived late and were told by God that all the land had already been distributed. When they replied that they were late only because they had been lifting their glasses in praise of Him, God was pleased and gave the Georgians that part of earth he had been reserving for himself. “
but the actual structure of the feast with the toast, tamada, and set sequence of the supra seems to be much more recent.  Before the term supra was coined, feasting in Georgia was more commonly referred to as Nadimi or p’uroba (referring to the traditional puri bread served. )
So why did Nadimi change and become the Supra we know today?
According to texts the supra emerged with the incorporation of Georgia and the rest of Transcaucasia into the Russian Empire in the early 19th century. Through this the Georgian culture was suppressed and so the supra was used as a way of taking back power that had been lost to them.  I read in one study:” Supra succeeds in creating a mitigated (“pleasantly authoritarian”) version of the current repressive situation, which helps people to accept reality. ” Toasting became a way of feeling like they were still doing something for their country, god, family, etc where the confines of the Russian occupation didn’t allow them to do this in their day-to-day lives. Toasting was a way to take back the power that had been lost.
it was also a way to continue cultural traditions. so in addition to the abundance of food and drink, the need for a specific supra table along with particular dishes, specially designed interiors, and even traditional elements, such as traditional clothes, dancing, and singing all were a way to hold onto and tell other generations about Georgian heritage.  Supra also was and is an opportunity for political discussions, poetry or verse improvisations, musical performances etc….
Of course because of this in Soviet times the supra was frowned upon by the state authorities. In fact, in 1975 a law was passed in Soviet Georgia that large banquets associated with marriages, deaths, births etc were seen as blatant opposition to the Homo Sovieticus (average conformist person of the era), and the supra was declared a harmful custom.
Today with a now independent Georgia you may ask why this tradition has continued? Some speculate that the supra seems to offer a permanent form of cultural strengthening in the face of modern globalisation.
It has become such an important part of Georgia’s traditions that being invited to an authentic supra is certainly an honoUr for any foreigner visiting or living in Georgia. It is an event that is looked upon with excitement but also despondency….as you know you’ll be leaving at least 1 or 2 pants size bigger than you started LOL 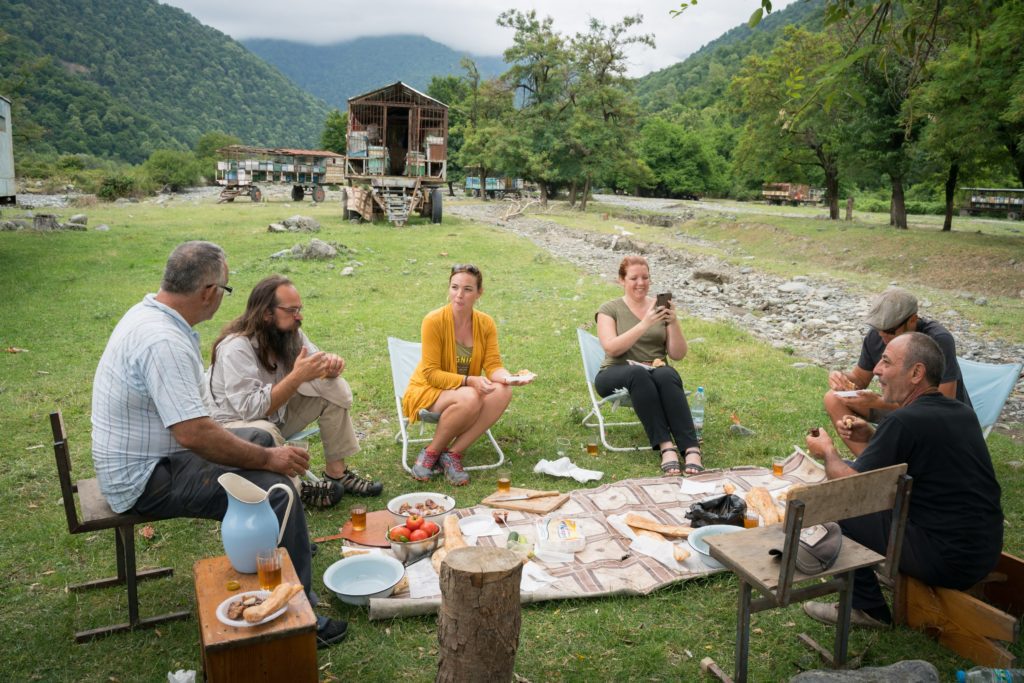 A Georgian Supra we had instead of collecting honey from the bees. (listen to the podcast for the full story)

From Georgians:
From Foreigners: