Mongolia’s western border at Bulgan is not frequented by foreigners – but it is certainly open to us! Find out how we made the crossing from Khovd to Urumqi in August 2013. Similarly to when we arrived through Erlian & Zamiin-uud in the east, border corossing between China and Mongolia are not straight-forward, you just have to put the time in and plod through the process – expect your passports and bags to be checked multiple times and for staff to be very confused by you!

Getting to the Bulgan Border (From Khovd)

Bulgan is not exactly a tourist destination… in fact, it is about as far removed from the tourist trail as is possible and, for Mongolia, that is quite a significant detour! It’s about 12 hours of dusty mountain roads by jeep from Khovd, to be exact. Still, apart from the eastern border at Zamiin-ud, this is the only other Mongolia-China border open to foreigners as of 2013.

If you have made it to the western side of Mongolia, you can save yourself days of bumpy travel back to UB by exiting to China and then getting the sleeper train from Urumqi to wherever your next destination in China is, or just check out the west itself.

Getting to Bulgan is cheap and simple though not necessarily comfortable. Head to the south end of the Black Market in Khovd and you will find a mass of jeeps, minivans and Russian vans bound for multiple destinations waiting for people. 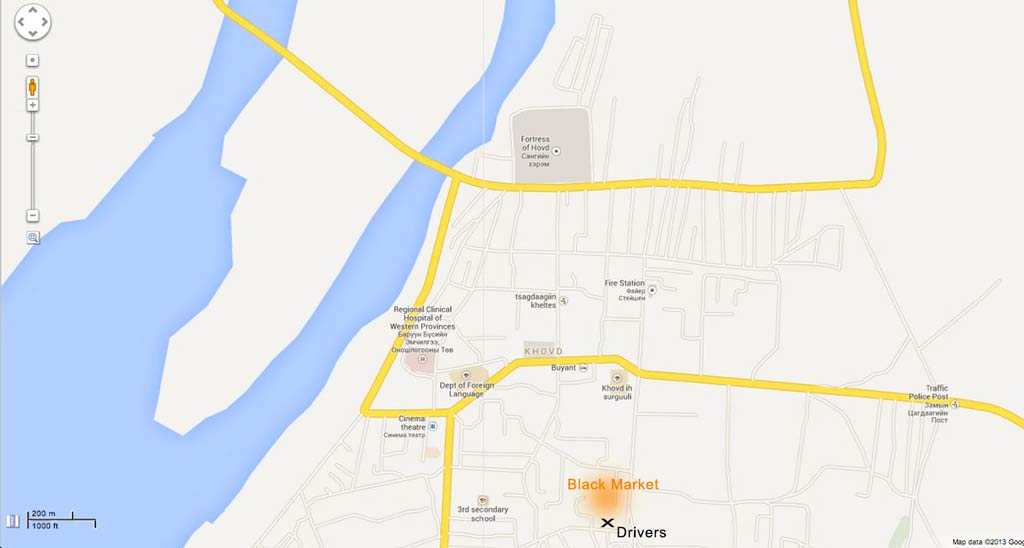 Where to find drivers in Khovd

A van leaves for Bulgan in the afternoon almost every day (unless they can’t get enough people, in which case you can offer more money if you have to leave that day) and normally cost 30,000MNT (about $21) per person. Walk around asking for “Bulgan” (Булгана) and people will point you to the right van, which will normally have the destination written on a card on the vehicle.

We got lucky (for the first time in Mongolia!) and our 5 seater jeep only had 5 occupants… previously, similar jeeps had had 7 to 10 occupants, which is not a comfortable choice on Mongolian roads I can tell you! We arrived at the market at 11.30am and the van picked us up from our hotel at 13.15pm. This, we are led to believe, is more efficient than usual, its better to arrive a little earlier to book your space and don’t expect the van to leave before 4 or 5pm. 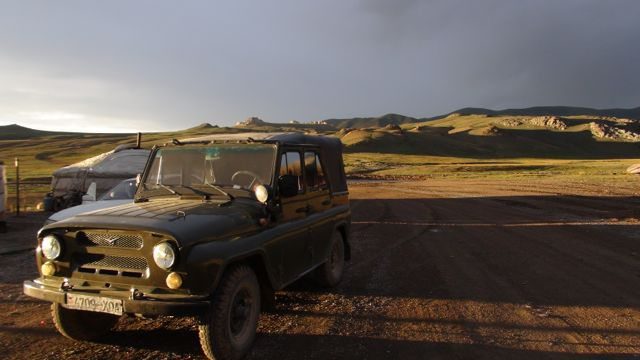 We stop at a Ger in the Altai mountains for a pot noodle!

The drive to Bulgan took 12 hours. It is quoted as being 10 to 12 hours and our driver was fast (in fact, insane) even by Mongolian standards. Even if we hadn’t stopped for dinner I don’t believe you could make the trip in 10 hours in this sort of vehicle.

We arrived in the middle of the night and the driver kindly let us sleep in his Ger for free – and fed us! Although this sort of hospitality is common in Mongolia, don’t rely on it.

Getting to the border from Bulgan

After a short night’s sleep, we managed to get our driver, who spoke no English at all, to call us a taxi from Bulgan to the border. This costs 5,000MNT per person. Bulgan is a border town so getting to the border is a frequent request and is pretty easy.

Simply pointing at your passport and saying “China” and “Teksi” (Taxi) should do the trick. Mongolians are normally very helpful and will probably call a taxi for you, even if you have just met them.

The ride to the border is on paved road (what a relief!) and takes about 30 minutes. The Border opens at 9am, it pays to get there early.

The border opens at 9am and closes at 6pm. The earlier you leave, the higher chance you will have of easily getting a taxi/bus to Urumqi on the other side. One of our Mongolian guides informed us that the border will sometimes close for up to 2 hours for lunch too, so we aimed to get there before 11am. It took us about 1 hour from arriving at the Mongolian border gate to walking out on Chinese soil.

The actual crossing itself is somewhat long-winded, but unlike the eastern border you can cross on foot or by bike/motorbike. Make sure you have a valid Chinese visa before arriving. Here is our story:

The taxi dropped us at the gate. Soldiers (friendly ones at that!) check your passport and you walk towards the immigration building. Through a small door you line up, they scan your bags, check passports again and you get to a desk where they take the passports and tell you that you should have filled out an exit card (we’d asked for one whilst in line, but to no avail). We were led around to the immigration office on the inbound side where they checked passports again and filled out a tiny piece of paper for us (How we would have known about this office in advance and why they did not direct us there when we first arrived, who knows!).

Back to the exit desk for more passport checks (yes, the checking of passports is going to be an infinitely reccurring theme in this story!). They do the scanning and then we head out past the duty free shop (closed). Out of the gate for the Mongolian compound where, you guessed it, our passports are checked! 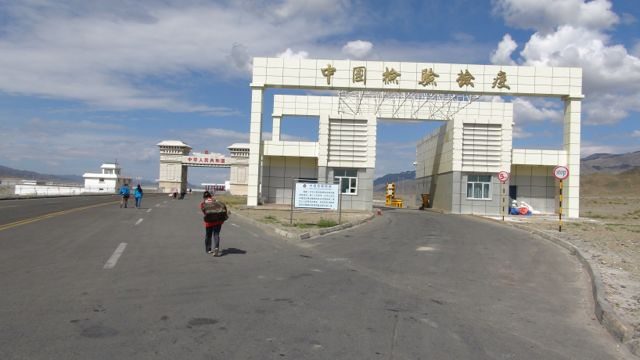 Passing through No-mans-land into China we get a sneaky photo.

We head the 50 meters across No-mans-land to the gate of the Chinese compound. Passports checked. We are directed to bag inspection. Now it gets interesting, our bags are pretty much emptied, they go through everything including checking our ipad and camera for “sensitive photos”… It just so happens that we took the photos here of the border crossing on our video-camera, the only thing they didn’t check! phew! They also didn’t notice we’d put vodka into a plastic bottle… They did check our passports again though!

Whilst in the line an official comes and takes our passports and studies them carefully – note that Mongolians/Chinese have not had anywhere near the attention we’ve had, even though they could have piles of cocaine in their trays of biscuits, disguised as sugar!

We finally make it to the immigration counter, the Chinese officials consult on our passports. After some deliberation they stamp us in. Our bags are scanned, opened and fully inspected again. They find our stash of medications and ask what the white and pink ones are for, Megsy points at her belly and says “No Babies” which amuses the official somewhat! Not enough to stop him needing to check our passports again though!

We leave immigration and with a final check of passports at the gate we are released into China to a flurry of taxi drivers shouting “Urumqi” at us!

For those of you who were counting, our passports were checked 14 times, but possibly we missed a few! This is the most thorough identity check I’ve ever been subjected to. lol.

Getting to Urumqi from the Bulgan Border

There are two options. Bus or Taxi. From what we’d read, the bus costs upwards of 170 yuan, could involve at least 2 busses, detours and waiting around. We can’t confirm any of these stories as, by our 3rd day of straight travel, very bumpy roads and minimal sleep, 250 yuan per person for a direct taxi sounded like a pretty good option.

There were plenty of taxis waiting at the border gate, mostly to collect Mongolian biscuits, but more than happy to take our money too. We arrived just after midday (which was actually 1pm Chinese time).

The taxi took us to the local town of Takishiken (about 7Km away) for Lunch. It turned out this was not our taxi at all, just a humble biscuit trafficker giving us a lift to town so his friend, the taxi driver, could take our money. Still, he didn’t charge us anything and lunch was tasty (25 yuan each)! 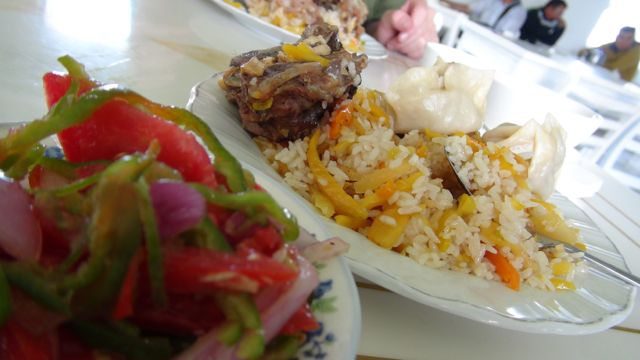 Our first non-Mongolian meal in a month had vegetables in it!!!

We got in the taxi at about 1.45pm Chinese time. After just under an hour of phone calls and driving around the town we finally had a full car of 7 people. Unlike Mongolia, everyone gets a whole seat to themselves!

The journey to Urumqi took just under 7 hours. Estimates online had told us that the local bus would take 5-8 hours. Given that our taxi driver hit speed of 140Km/h, I somehow doubt the time estimates for the bus. Still, if you have done the bus ride, please leave us some comments! 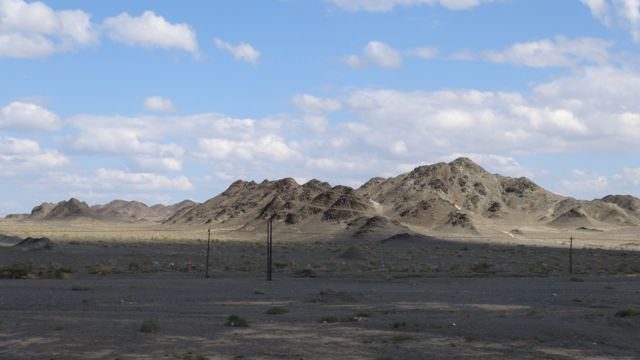 7 hours riding through the Gobi Desert south to Urumqi

We arrived in Urumqi at 9.30pm to discover that both the cheap hotels we’d picked out were full 🙁 But thats another story…