In a coffee crazed country like South Korea you can expect to see a coffee shop on almost every corner. In Seoul some stores have decided to add a cute and cuddly twist…

There are quite a few pet cafes to choose from in Seoul. We were actually looking around  for a completely different kitty cafe when we stumbled upon the appropriately named “Cat Cafe” (that was actually its name) but all we were after was a kitty cuddle so it didn’t really matter which one we went to. 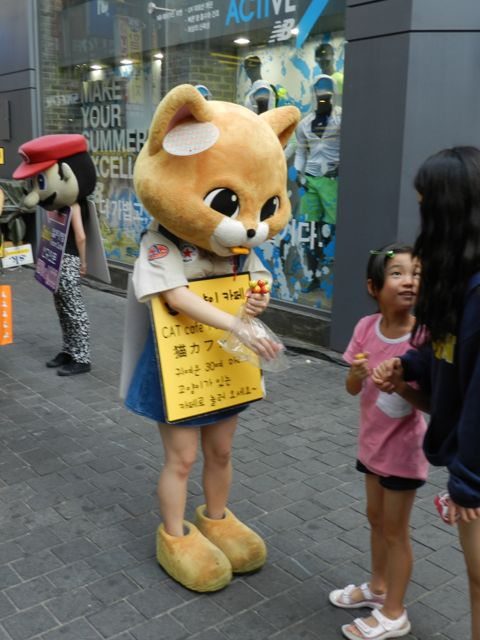 Upon entering you have to remove your shoes and put on the provided slippers, so if you have any issues with wearing shoes that have been on other people’s feet…wear socks! A staff member will also squirt some sanitiser on your hands.

It’s at this point we realised the absolute insanity that was going on around us! We had made the mistake of going on a weekend, so there were quite a few squealing kids running amok with a variety of cat toys, zipping from cat to cat trying to get its attention. Most of the cats, being cats, weren’t wanting any part of it! The slightly older Koreans were more focused on getting the ultimate selfie with a cuddly kitty. 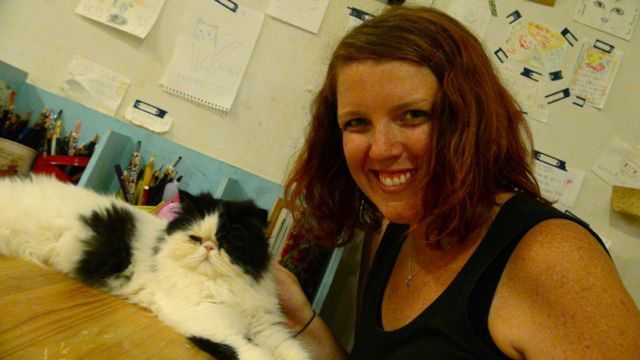 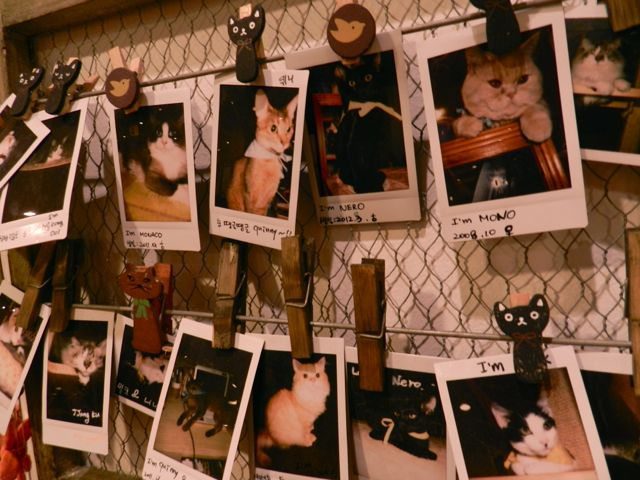 The good news is that there are plenty of cats to go around, so you’re bound to be able to pat one at some stage. They were lying on the tables, on shelves and in special high mounted cat boxes. There was also a little private area that was not accessible to customers that was called the “kitty toilet”! 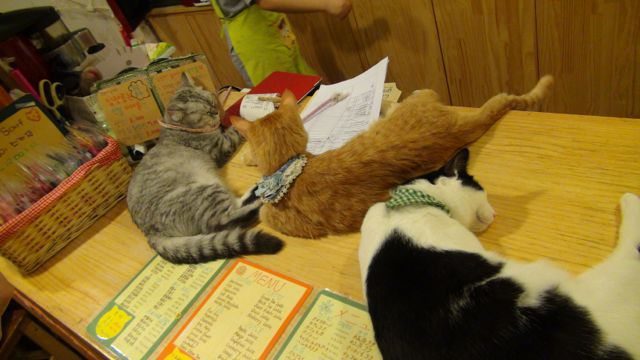 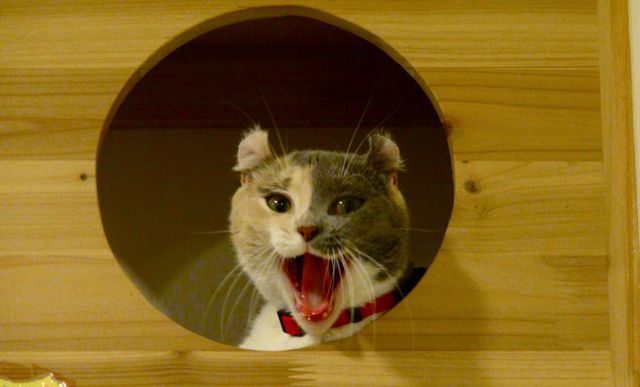 The only catch is that you MUST purchase an overpriced and rather below standard beverage for $8 each! But we figured it wasn’t such a high price to pay for the novelty of the experience.

To find the “Cat Cafe”, head to Myeong-dong subway, exit 8 and head north. Walk about 50m and take the second left, the cafe is a short way along this street. There is another cat cafe nearby too as well as a super mario cafe!

⇒ Want more info about Seoul? Click Here to check out our Podcast “The Dish” and listen to our full episode about the history of Kimchee and What to Eat in Seoul

As we loved the kitty cafe, we decided it would be only fair to hang out with some other little fellas too. In Seoul there is also a sheep cafe, but after a month in Mongolia we had seen enough sheep to last a lifetime, so next time around we decided to go to Bau House (their website only works for members apparently?!), the puppy cafe! 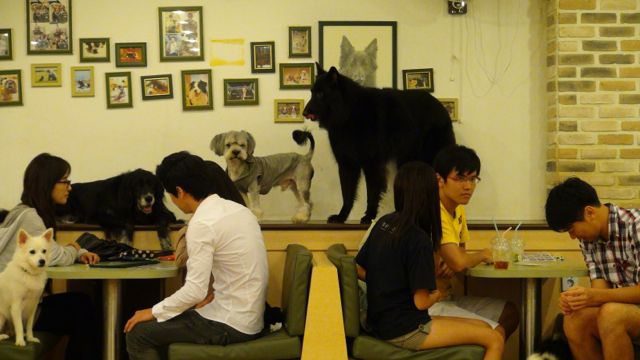 Bau House was a little different from the cat cafe as people were welcome to bring their own dogs along for a cuppa as well. if you don’t have your own never fear, the cafe has plenty of playful pooches…if you can get them to pay any attention to you at all that is!!! 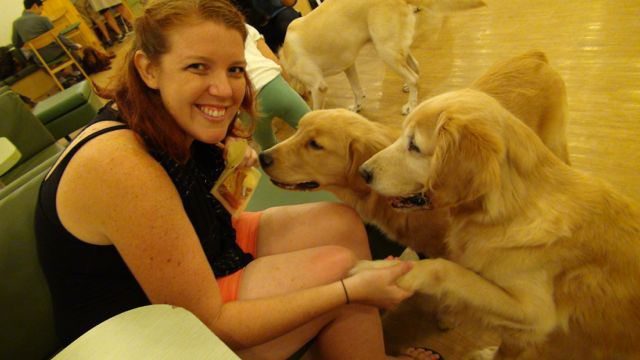 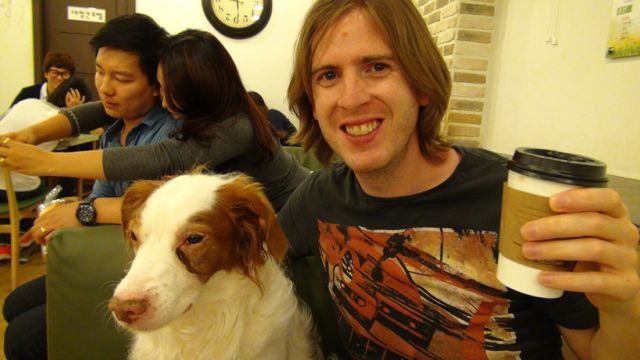 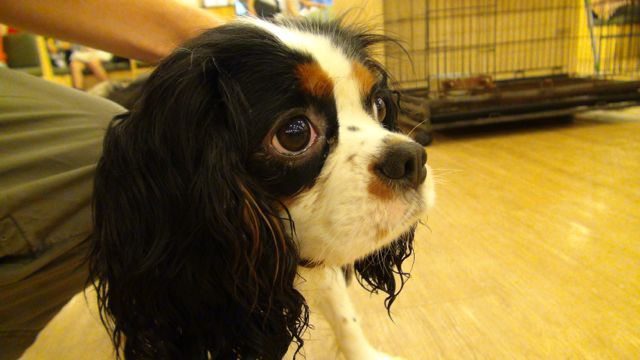 It doesn’t take long to discover that these dogs are only interested in you if you have a doggy treat in hand, otherwise they won’t give you the time of day.
Treats cost between $3 and $5 and once you’ve got an open packet, the dogs go wild! The tables have now turned and the dogs are trying desperately to show off their skills and do practically anything to get that doggy treat in your hand! 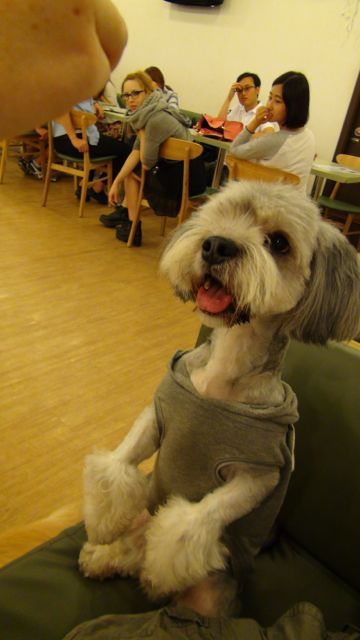 This is where things get fun. Many of the dogs are trained and if you pay attention to how the staff interact with them, you can figure out what tricks they know. These dogs could do everything from shaking hands to giving hi-fives and one would even bark the amount of fingers you held up (anything from 1-5). All they ask for in return is some of your tasty dog treats. Be careful though, some of them can get a little too excited and a bit snappy at your hands, so watch your fingers!

Once again as with the cat cafe you must purchase a drink but here they had a great selection of coffees, fresh fruit juices, smoothies or even beer if you wanted!

Prices were quite reasonable (about $6 dollars and up) and the drink quality was much better than at the cat cafe.

The only downside to Bau House is the dogs do just piss on the floor wherever they like, the staff are amazingly quick at cleaning it up straight away with disinfectant so there is no pee smell at all, but it’s still gross to see a dog chuck a squat or cock it’s leg while you’re enjoying a coffee with friends.

To get to Bau House, head to Hapjeong station (line 2) and take exit 3. About 10 metres behind exit 3 is a small street (yanghwa-ro-8), walk down here about 30M and the cafe is on your right.

Which is better? Well, the puppy cafe had much better drinks but the preference really comes down to whether you are a dog person or a cat person – I’m both!

These cafes are an awesome novelty for travellers and a great place to visit if you’re not a pet owner, I just wish they had them in more countries! They are hugely popular in Seoul, so I’m sure that these pet cafes will be popping up elsewhere around the world soon…well, at least in places where food hygiene is not as strangled by health and safety. Thats why we Love Asia, they let you do anything here!!!