We discover that the Naadam you read about in the guide books is only one tiny part of Mongoila’s national sporting heritage. Getting outside of Ulaanbaatar to experience the real, local Naadams at the grass roots level is a unique experience, a world away from the tourist filled stadium of the capital. 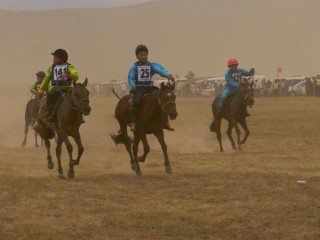 The Nadaam Festival, or as the locals refer to it  “Eriin Gurvan Naadam”, is an annual event (held mid summer July-August) that is the Mongolian equivalent to the Olympic Games. The name Eriin Gurvan Naadam means “Three Games of Men” and refers to the hugely popular events that are held during this festival: 1. Wrestling 2. Archery 3. Horse Racing

Today however, women are allowed to compete in archery and young girls in the horse racing but the wrestling is still strictly men only!

The largest and grandest of the Nadaam Festivals is held every year in Mongolia’s capital Ulaanbaatar, and many tourists flock to UB to witness the festival’s events. We’ve heard many tales of overpriced entrance fees, poor visibility, and all in all poorly run events.

BUT we will let you in on a little secret…. The Nadaam in Ulanbataar is not the only Nadaam festival! In fact many smaller communities continue to hold late Nadaam festivals well after the dust has died down in UB and the bulk of tourists have continued on to other destinations. Unlike in UB you can also get up close to the athletes as they compete – and its free entry!

We found out about late Nadaam from a tour guide and driver we had been emailing prior to arriving in Mongolia, but strangely many other tour companies don’t seem to advertise these Late Nadaam Festivals and we had to really press them for information on exact dates and locations as they honestly had no idea, and had to call around to find out!

Note: it does seem that tour companies / guides in UB are only aware of the “standard” tourist packages i.e. only what they offer!  If you ask for something out of the ordinary like “can we make our own way to western Mongolia finding drivers along the way?” they will often go on about how hard it is to organise anything once you have left UB….. Whilst it may be harder than having an organised tour, it is far from being particularly difficult, as we discovered for ourselves.

Anyways back to Late Nadaam…… We decided on attending the Late Nadaam Festival at Tsetserleg as they were also celebrating 90 years (90 years of what? Well we think it was 90 years since the town was founded but we got a few different stories).

We had been advised that the festival in Tsetserleg would be held from the 26th-28th July and the opening ceremony would begin at 10am. It was while sitting in the stands of the towns stadium in the sweltering sun that we became aware that Mongolian time is like Fiji time or Mexican time…..very relaxed and almost never on schedule!

However, during this time we did enjoy watching many of the locals, young and old, walking around in Mongolian traditional clothing also know as “Deel”.
The opening ceremony finally started at 11am and went for over an hour! We were treated to story time with a very “interesting” volcano explosion of….balloons, local school children dancing in many different styles, acrobatics and at one stage they brought out 3 large trampolines where the smaller kids entertained us with tricks such as jumping, bouncing on their butt and then landing back on feet again (man if I was born in Mongolia I could have been a trampoline star!)

The finale was a large orchestra of Morin Khuur (horse-head-violin) and singers who performed the famous Mongolian throat singing. Once the Opening Ceremony was over then the games could begin!

Archery was held just outside the stadium and Wrestling within. The horse racing, we learnt, was being held out of town as the races can often be 10-30kms in length! Also it should be mentioned that there are no adult Mongolian jockeys, these long races are competed in by small children whose ages range from 5-13!

Sadly we learnt that at least one child every year dies during these races, it is a tough and gruelling ride for these youngsters but the winners are praised with the title of “tumny ekh” or “leader of ten thousand”, a title sought after by many. For the loser however they get the title of  “bayan khodood” meaning “full stomach”. The race for spectators is really just standing around for ages (mostly eating and drinking…lots of drinking) waiting for the couple of brief minutes when the kiddies cross the finish line in a ferocious fury of……well, dust!  It’s crazy dusty!!! Taking some sort of breathing apparatus is our recommendation. 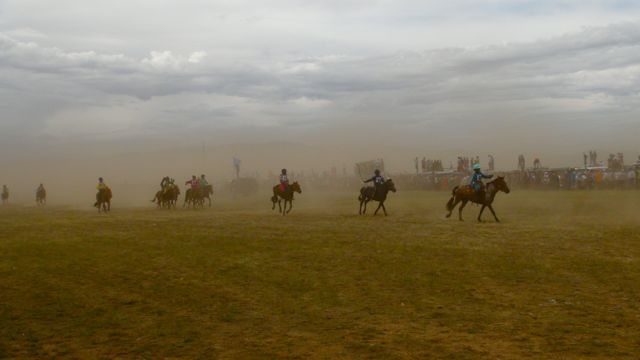 Getting dusty at the GGs

Deciding to take a breather from the horse racing (quite literally) we head off to watch the archery.

All Mongolians will claim that their archers are the best in the world and it is during Nadaam that they can show off their expertise. Both men and women are allowed to compete, however rather than aiming for a traditional target as we know it, they aim for cork cylinders braided together with leather straps that are stacked on the ground at a distance of 75 meters for men and 60 meters for women.

The archery was briefly interesting but it was the big guys of the festival that we wanted to see…. The wrestlers!

The funny thing about Mongolian wrestling is that there are no weight divisions and the winners can choose their opponent. So it’s no wonder that the big guys win….and these dudes are BIG! As said earlier this event is a no go zone for the ladies and the uniform that the wrestlers wear is a way of enforcing it.

The wrestlers wear large boots, very very tiny red or blue shorts and open fronted jacket. the reason for the open front is due to the tale of one wrestler that competed and defeated all of their opponents however, at one point, the “Jodag” (jacket) was ripped open revealing the wrestlers boobies, showing that she was actually a woman….from that day on the Jodag has been open to reveal the wrestlers chest. To tell you the truth, some of the dudes we saw had some decent moobs going on anyway, that’s for sure! 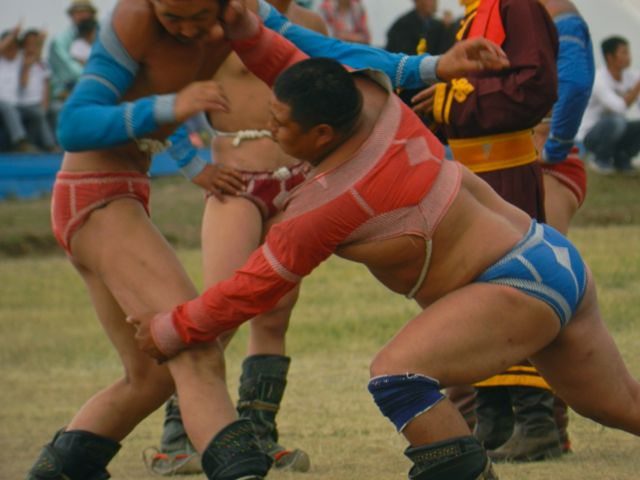 That night the locals celebrated further with a concert held in the town square. We had been told that there would be singing and dancing… silly us, we instantly thought it would be “traditional” singing and dancing but no, it was Mongolian Pop Idol and the singers offered up ballad after ballad after ballad as it seems that that’s all anyone is interested in listening to here. There was even a drum kit and electric keyboard on stage, but alas no, all singers stuck to their prerecorded karaoke tracks of Mongolia’s Best Ballads Volumes 1-5.

If you want to experience the Local Nadaam Festivals they happen across the country throughout July and early August. The final dates are often not confirmed until June, which can make planning difficult. The Mongolia tourist board in Ulaanbaatar will normally have the most up to date information, or ask your driver/tour operator.

The “To Mongolia Blog” tries to post up to date info on the subject and you can see lists of the major 2013 dates here about half-way down the page (under “Countryside Naadams”) which may help you plan approximately for trips in 2014 until final dates are announced.  Be aware that there are many smaller Naadams which will not be published online but finding them may prove tricky!