Asian Beers have a reputation for being weak flavoured, watery lagers. Although alcohol content varies, taste lies in the same ballpark, regardless of brand.

I wanted to put together a top 10 list… I couldn’t. I have actually failed in finding 10 beers of note in the whole of East Asia. I could easily bulk out this list with some sub standard products but who would that help?

There were 2 main requirements for selecting this top 5 Asian Beers:

I’ve done my fair share of sampling in order to compile this list. That’s being modest… I’ve done excessive sampling! If you are travelling through Asia and need a drink, this is the cream of mass produced beers available.

There are a few reasons this seemingly generic Asian beer made the top 5. Firstly, you can find it on draught in Cambodia for as little as 25 cents a glass – probably one of best value pub beers in the world! Secondly, compared to Cambodia’s other typical draught beers it has crisp, malty tones. It may not be full flavour but for a larger its surprisingly bold. 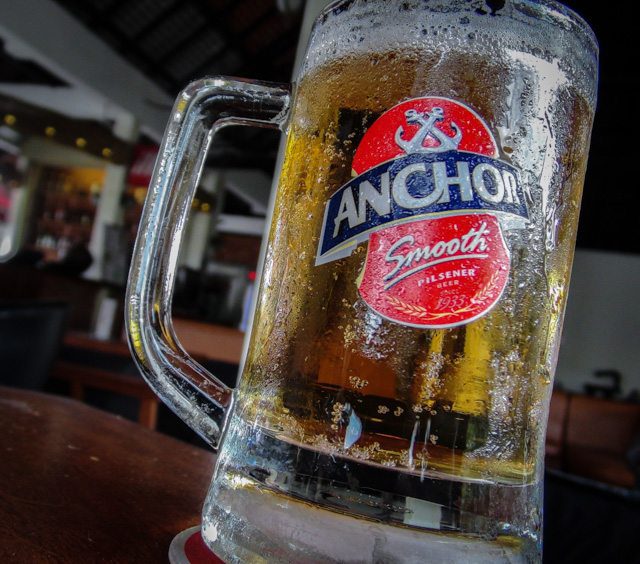 Apart from being available in Cambodia pretty much everywhere, we have also seen the bottled version in Malaysia, Vietnam and China though, as is often the case, the bottled variety is never as good.

Anchor is not to be confused with “Angkor”, which is horrible. To avoid such mistakes, or because of poor English skills, the locals call anchor “An-Chore”.

One of Thailand’s biggest beers and available in most of south-east Asia, Leo is competitively priced at about 42baht ($1.40 From 7-eleven) and up for a 640ml bottle. 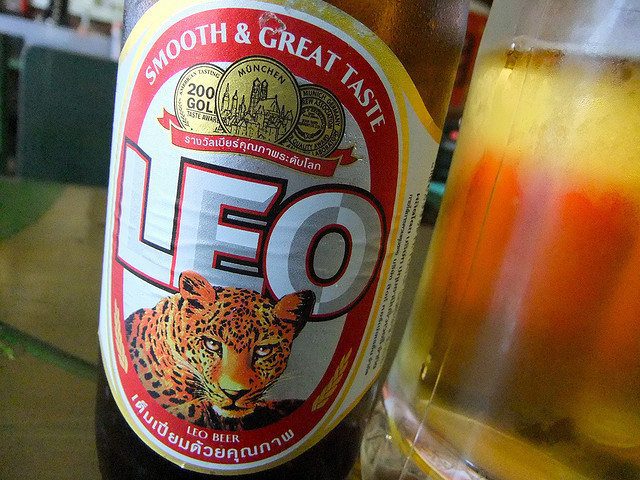 It may not beat Cambodian prices but it’s certainly one of the affordable Asian Beers. It’s refreshing and doesn’t make me gag once the bottle has warmed a little in the sun. Quite an acceptable brew compared to the disgusting bite of a bottle of Chang (also known as “Elephant piss” by the locals).

The more observant of you will note that this is not an Asian beer. Yes, it really has been that tough to select just 5 beers. The thing about Hoegaarden is that it seems to be available all over Asia. It’s the mass produced “craft” beer of choice. Fruity and delicious but with a price tag to match. 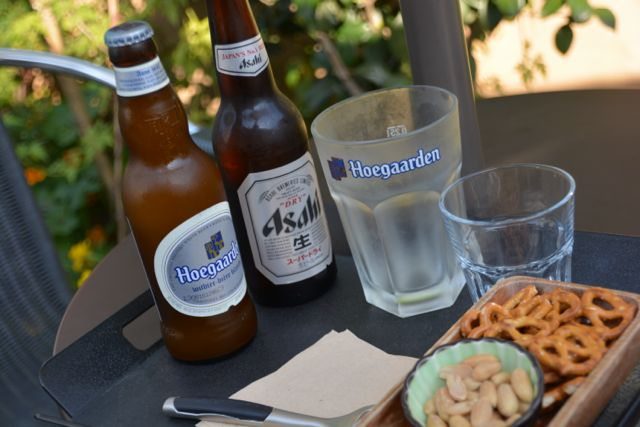 Here our Hoegaarden is pictured next to Asahi… Not a top 5 beer for my money, but its darker counterpart “Asahi Black” could be a contender to replace Hoegaarden as a more Authentic Asian choice. It’s certainly not my favourite of the Asian dark beers but it’s one hell of a step up from a bottle of Tsingtao!

We’ve only seen this one in the Philippines, where, whilst being widely available, is almost always overshadowed by the cheaper and massively over advertised juggernaut that is San Miguel pilsen (if this was a top 6 then Pilsen would probably grab that spot). We are pretty sure that San Miguel owns most of the Philippines and when it comes to beer, they have few serious competitors. 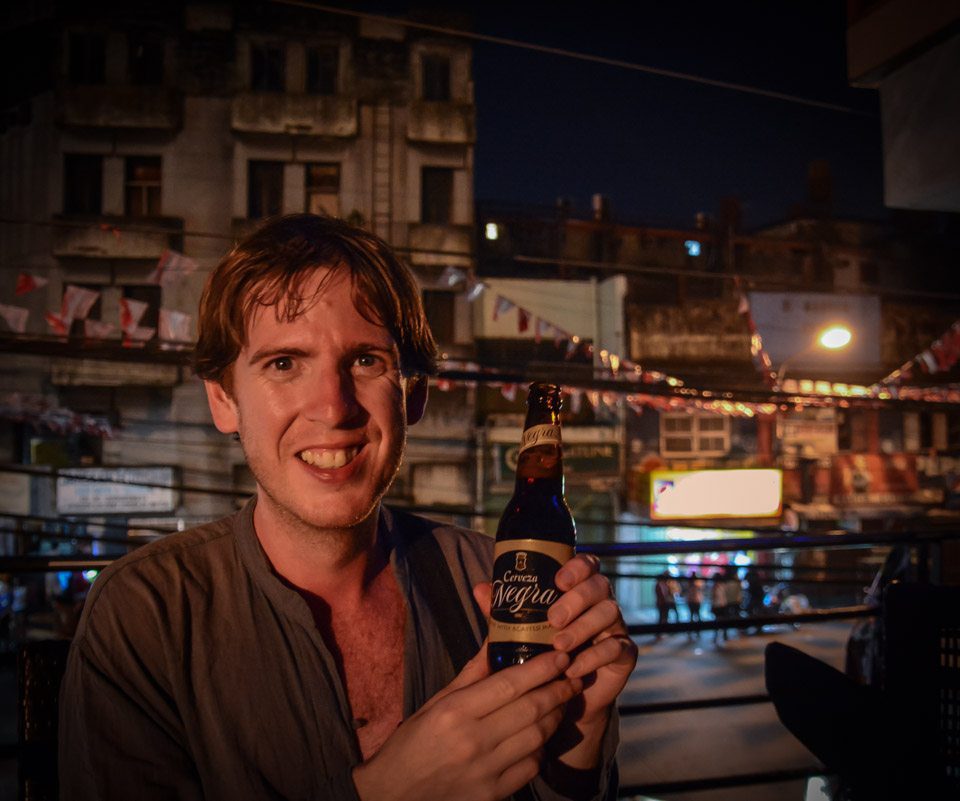 For the alcoholics there is Red Horse, a 6.9% liver rotting party beverage. For those who enjoy beers with flavour, Cerveza Negra is the way to go. It also happens to be manufactured by San Miguel and as the name suggests, its a black beer. Roasted malt and barley flavours combine to make this a thick and filling brew. With Guinness being so expensive, you need to get your vitamins and iron somewhere, right?

This is an Asian beer for everyman, as long as you are willing to head to Burma. Although, one day, Myanmar Brewing Company is sure to start capitalising on its winning formula beer, who knows when that will be. Either way, these things are normally better from the source anyway. 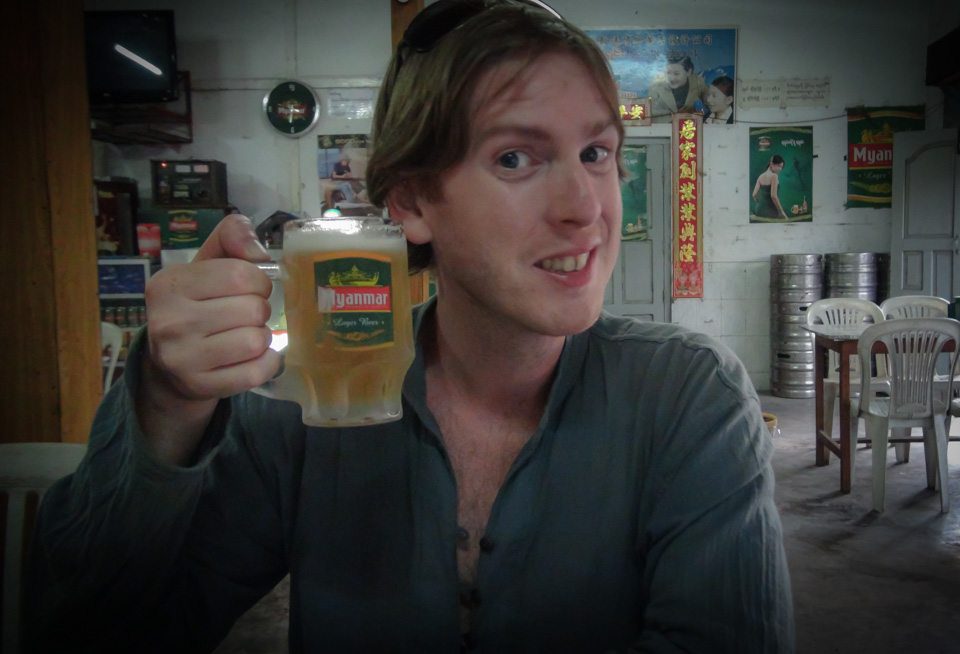 What makes this seemingly regular larger so good is the consistency of the product and the way it is served. “Beer Stations” are now present all over Myanmar and they all serve this crisp, refreshing tipple perfectly ice cold and at a very reasonable 70 cents a glass all day. After a hot and sweaty Asian afternoon, nothing has quenched our thirst whilst simultaneously appeasing our taste buds quite like Myanmar draught.

The best of the rest and those best avoided

Of the major brands, we found “Max” to be the most palatable. There is also a “Black Beer” that can be found in convenience stores in big 2 litre plastic bottles for under $5US.

Beer consumption in China is massively popular. They think they were all big drinkers… then you realise that their beer is generally about 3% alcohol. Fortunately it can be found very cheaply, 50 cents to $1 for a 600ml bottle in street restaurants and stores. I wouldn’t recommend a single Chinese larger, although Harbin beer on draught is ok, especially when you are sat out eating BBQ 🙂

I have nothing good to say about any of the major brews such as Tiger, Singha, Chang, Beer Lao and the Vietnamese beers. I do my best to search out alternatives whenever possible!

Kingfisher premium, often referred to as “light” or “mild” as it is only 5%, is quite a reasonable beer. We found the consistency to be alarmingly varied across India though. Either they can’t maintain a standard flavour batch by batch or it is brewed in multiple locations.

The Kingfisher strong left a bad taste in the mouth. Kingfisher ultra, with its inflated price tag, really wasn’t worth the extra cost.