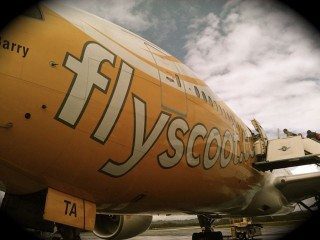 You may not have heard of Singapore Airlines’ new budget carrier “Scoot” but its a recently launched airline that is bound to make some waves in the budget airline scene. Taking on the already established Jetstar, Air Asia and and Tiger what makes this airline any different? Its the little things…

What does Scoot have to offer?

When you buy your ticket thats all you get so there is the add ons of luggage, meals, entertainment etc, as with any low cost carrier.

Gold Coast to Bangkok (Short stop in Singapore) at $460 AUD included 2 seats, 1 checked in bag and the “service fee” (of $30) which we think is a nice way of saying credit card fee.

Although we got a cheap rate, this is by no means the cheapest fare going. We’ve seen sale fares, which you can keep track of by signing up to Scoot’s Facebook or email list, starting under $100 for Gold Coast to Singapore.

Scoot is always offering deals to get themselves noticed in the market like them on FB to get regular updates!

As they are still new so word has not got round about Scoot as yet and having flown twice with them I have managed both times to score a couple of extra seats so I can stretch out, also the seat space is quite decent anyway so you don’t really feel cramped. 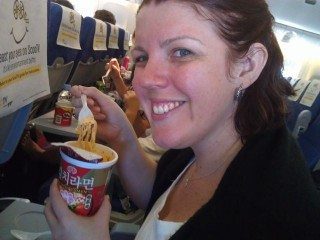 Overall a good variety to choose from. Ranging from traditional Singapore meals, a couple of sandwich options or your standard airline snacks of Pringles etc. You can either pre purchase these or buy whatever is available when you get onboard (all prices are in SGN Singapore Dollars, but you can pay with AU$ or plastic) we had some Kimchi Super Noodles which were $5 SGN.

we chose to load movies and TV shows onto our own iPad to watch while in the air but Scoot do offer iPads to use already loaded with Movies, TV shows and Games for $21 SGN or you can use your own device for $16 SGN and they will stream the movies etc to you over wifi.

One thing we did not realise is that if you (for example) buy a ticket to Bangkok via Singapore your luggage is not instantly sent straight through with you. You have to go through immigration at Singapore airport pick up your luggage and then re-check in at the Scoot counter and then go through security again!

However, never fear, Scoot are now offering “Scoot Thru” packages that you can pre purchase online for $16 SGN or buy at the airport for $20 SGN this additional fee means your baggage will be waiting for you at your final destination and you don’t have to go through the pain in the ass of immigration and security!

Overall we really enjoyed flying Sccot, naturally its not going to suit everyone as they do only depart from certain cities ie. Gold Coast, Melbourne but it is certainly a carrier to consider. They are offering more destinations all the time to places that have previously been hard to reach on a budget such as Qingdao in China.

So maybe it time to consider Scoot Airlines and do what their slogan suggests and “Get Outta Here”.