The Currumbin Wildlife Sanctuary (Gold Coast, Australia) originally started as one mans fascination for protecting local bird species. Over the years it has developed into a fabulous display of well looked after animals which lets you meet most of Austraila’s most recognizable endemic species.

Kangaroo, Koala, Emu and many others, many of which you can walk freely with and give ’em a pat!

In this article we take a brief look at all the critters we said hello too whilst at the park.

Kangaroos & Wallabies An Australian icon not to be missed. In the wild they can be quite dangerous and should NOT be approached. However, at the park, many of these creatures have been raised in captivity and are very tame and more then happy to bounce around amongst their human friends. Although I have seen wild roos during my time in Australia, you certainly can’t get photos like the one above. Its a little touristy, but who wouldn’t want a photo with our funny footed chums! We were free to take photos with no extra charges. We don’t really know the difference between Roos and Wallabies, the wallabies are smaller?! Unless you or your friends back home are zoologists you are probably going to be happy with photos you get, its hard for the lay person to tell which is which. 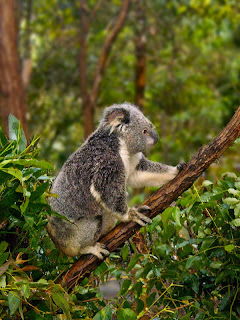 Koalas
These tree dwellers are very docile and supposedly stoned off their faces on Eucalyptus 24 hours a day. When they aren’t sleeping they are eating to put themselves back to sleep. There are plenty at Currumbin to see and take photos of, but if you want to have a photo taken holding a koala expect to pay at least $20… Still, we couldn’t resist, although I’m visiting Australia Long term I still feel like a tourist when I get somewhere like this! 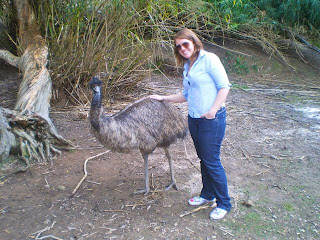 Australia’s answer to the ostrich, Emus are the largest native bird on the continent and at Currumbin they are free to walk around in the massive enclosure with the kangaroos, though they are a little more timid than the roos and will often move away when you approach them, so be gentle!

As well as the more famous creatures mentioned, the majority of Australian species are well represented, some are more reclusive than others (The Tasmanian devil for example) and apart from the Roos, emus and koalas, you won’t get to touch them. Still, with a selection of events run throughout the day such as feeding times and the birds of prey show (they are impressive!) you have a good chance of spotting most of the creatures if you look hard enough.

During the winter months (We went May 2011) Currumbin Wildlife Sanctuary on the Gold Coast were offering super cheap entry on Sundays for anyone with a local address, and the same deal came back for 2012. There was no strict procedure on entry, they just asked for our name and postcode, and no proof! not to say they may not tighten up the rules in the future but keep your fingers crossed if you are visiting in 2013.

Full price is $49. The 2012 rate was $15 on special, if you don’t live locally or don’t want to rip off an establishment that is helping animals then pay full price, its still relatively reasonable. There are other parks in the area where you will get to be up close and personal with marsupials, such as Lone Pine Koala Sanctuary, where a full price ticket is only $33 but they don’t appear to have Kangaroos, probably quite an important animal to miss if you are a foreigner.

Looking for hotel options near the Currumbin Wildlife Sanctuary? We recommend HotelsCombined. They have a great selection and help you get the best possible price!