Best Bars In Vilnius: This article provides a list of our top picks for Vilnius craft beer bars and traditional beer houses. From bare brick cellars to hidden bars and local favourites off the tourist trail. You’ll discover the best craft beer in Vilnius (Lithuania’s capital), including both modern craft beer, like IPAs, brewed in Lithuania, as well as unique traditional beers like Kaimiskas (farmhouse ale) or live beer (fresh brewed, still fermenting).

With this list of Craft Beer Vilnius Bars, you can explore every taste from ancient to cutting edge.

Lithuania actually has one of the longest running historical connections to beer in Europe. The word you need to know is Alus – that means beer. I think the word for beer is one of the first things I learn in any language. First beer, then hello. Because beer makes for a happier greeting to any new friend than a simple hello.

Lithuania even has an old pagan god of beer & fermentation – Raguits. We’re talking 11th century, and before.

Lithuanian beer has a completely separate, isolated history from other more famous beer making traditions like those of Germany/Czech, Belgium and England. Although you’ll also find plenty of modern generic lagers, as well as craft beer – IPAs, APAs and more. The most unique beers come from the traditions of the old countryside farmhouse brewers.

Home brewing became illegal during the Soviet Union, and major breweries were taken over by the state, normally being forced to make the cheapest mass market beer possible. But, Lithuanians refused to give up their brewing traditions, and farmhouse style brewing continued in secret. Today, northern areas of the country, like Biržai, or Pasvalys, are the perfect place to make a beer pilgrimage.

The traditional beers are often sweeter and less carbonated than modern commercial beers. So, may not be to everyone’s palate. That said, a lot of the small traditional microbreweries in Vilnius are providing something of a crossover in style. So you’ll find something quite Lithuanian but that meets international taste – Dark beers, ales and cannabis beer – the latter being surprisingly sweet, but I really liked it.

The countryside may be the best place to discover historic beers but Vilnius offers the widest variety of bars and beers for all different tastes.

Our complete list of the 12 best bars in Vilnius for craft beer is below. 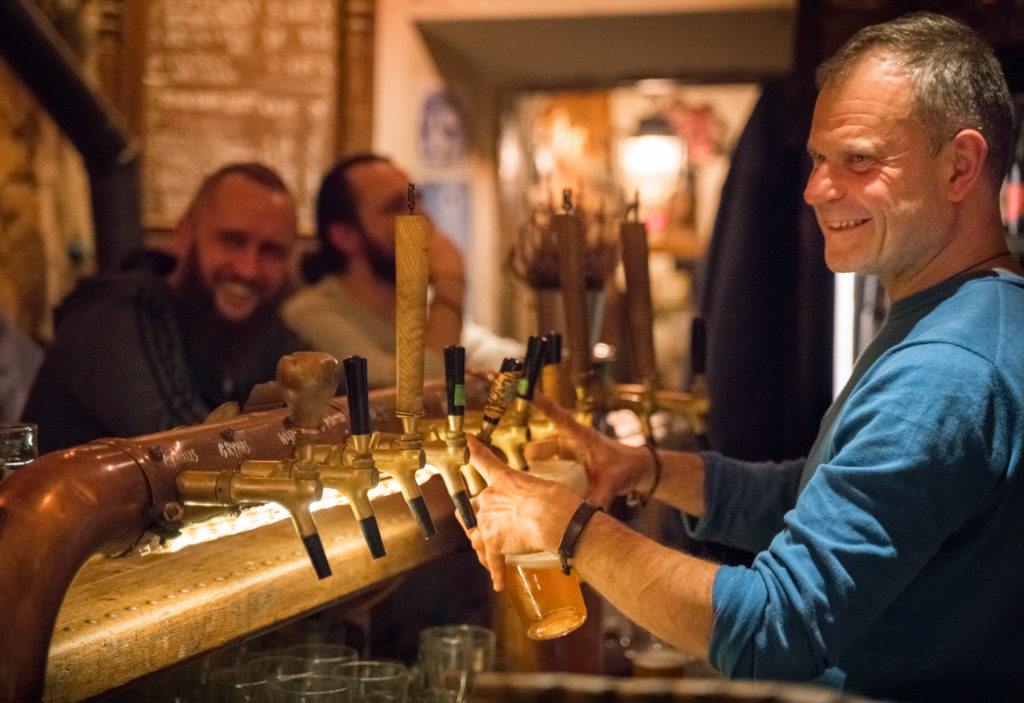 Tours are all about the guide. What you learn and the experience you can have being invited by a local to see their city, their way. A really good guide has a sixth sense that lets them know what you want before you even do. And that’s what we had with our guide Mykolas on our craft beer tour of Vilnius.

Independently, we visited almost 20 bars in total – the best 12 listed below. On the tour, we visited 4, and it was really the experience of having the guide and getting all our beer questions answered that made that the best night out from all of our “research” trips 🙂

It really showed that Mykolas cared about beer. Some guides in this world learn the basics to operate their tour and not much else beyond. But Mykolas was really able to offer a surprising depth of knowledge. We may have drunk a lot of beer in Vilnius, but the real cultural learning experience came soaked in specialist beers, introduced to us by Mykolas.

Lithuanian beer is an independent variety that diverges from more commonly known beer traditions like German, Belgian and British. We plan to release a podcast on the topic in mid to late 2020. So watch this space. Until then, listen to one of our other episodes on food and drink from around the world, especially our Lithuanian Food: What to eat in Vilnius double episode.

The below list of Vilnius bars is not in a strict order of which is best to visit. Each has its own merits and it always depends what you personally are looking for. 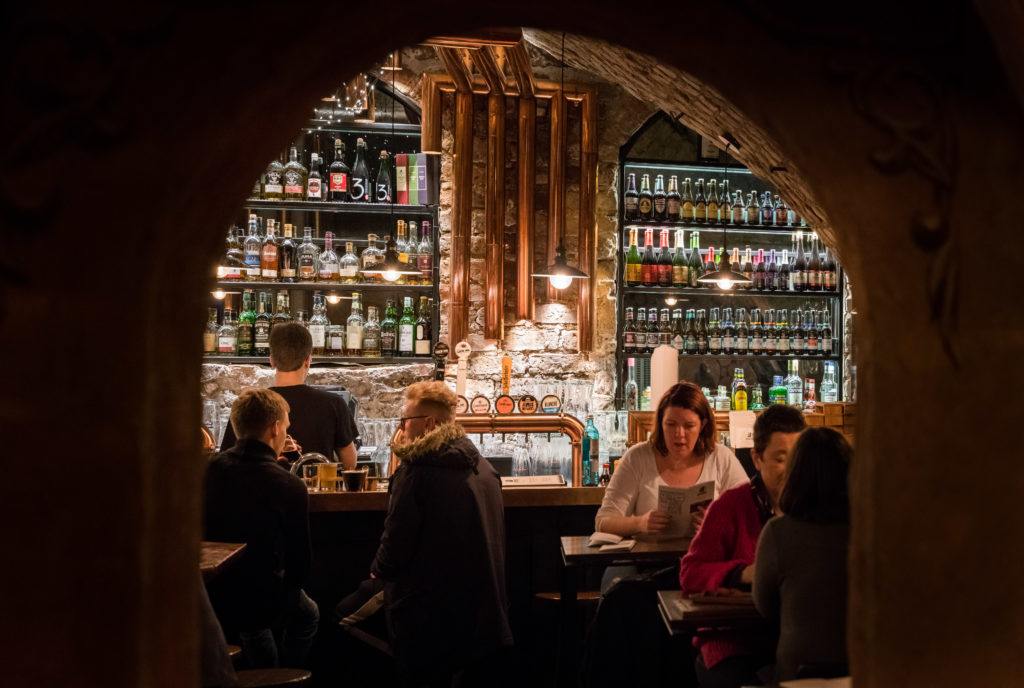 The very literally named Beerhouse & Craft Kitchen is topping my list for the most interesting decor/venue out of all the Vilnius bars. It’s a maze of cellar rooms, each with a different theme based around beer drinking traditions in different countries. It’s about as hipster as Vilnius craft beer gets. As well as a solid selection of beers on tap, the kitchen is serving up classic Lithuanian food with a sprinkling of pzazz. 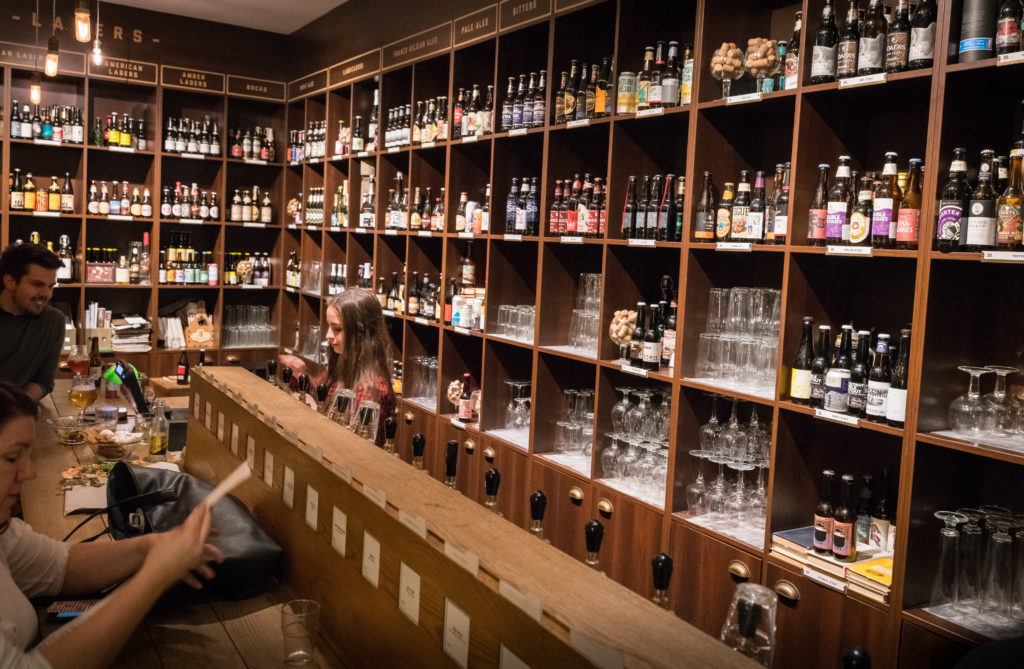 Beer Library makes this list as the nerdiest of the Vilnius craft beer bars. For beer aficionados, this is the place where you can spend an evening talking hops, malt and every little detail of brewing. Knowledgeable staff and an artisan selection of unusual beers from across Lithuania and beyond. Light on party atmosphere, but heavy on grassroots beer appreciation. 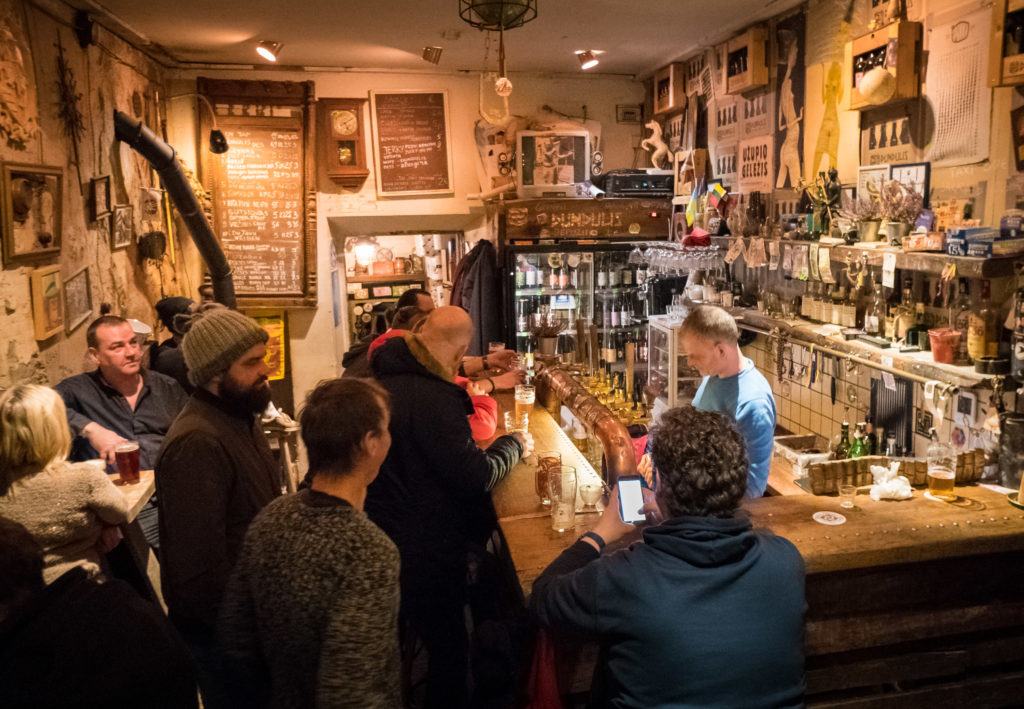 The Vilnius bar locals probably don’t want you to know about… Because it’s already featured on a lot of blogs and they really only have space for about 30 people. This shoebox size venue cares about good beer and holds a central place in the craft beer revolution in Vilnius with a focus on domestic traditional Lithuanian beers on tap. Foreigners are welcome but get there early if you want a seat. 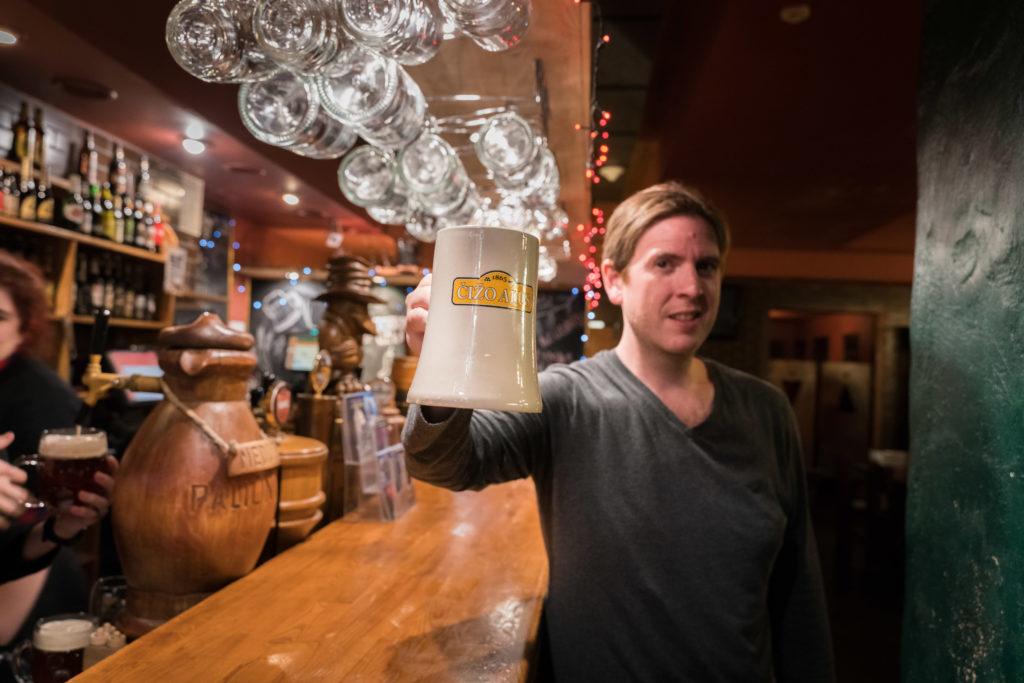 Being just a little bit out of the centre, west along the river, Alus Namai is lesser visited by tourists. It’s a large underground beer hall, with live music at the weekends and a lively local crowd. During weekdays it’s a little on the quiet side but this is made up for by there very traditional selection. As well as locally made craft beers (like Lithuanian IPA) they also feature some great versions of the lesser known Lithuanian beer styles. You’ll find culinary heritage beers from brewers like Cižo and Jovaru, as well as honey beers and more. 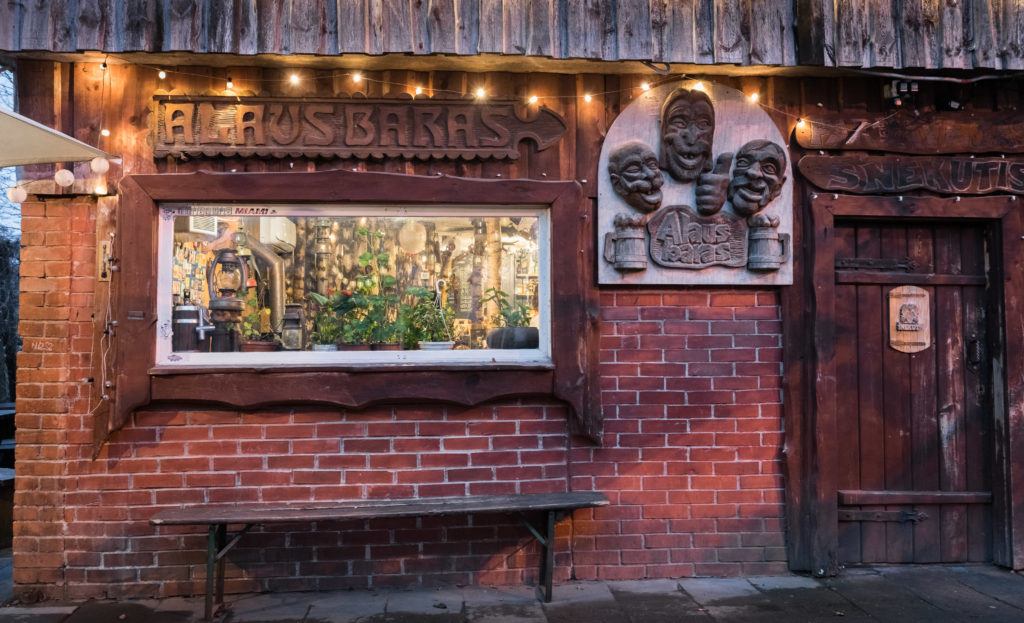 Probably the most famous of the new craft beer bars that opened after communist rule ended in 1990. Snekutis led the way in bringing traditional Lithuanian beers back to Vilnius. During the occupation, the Soviets enforced a policy of mass production beers and mostly banned home brewing. But brewers continued to make traditional beer in secret, keeping the traditions, and the old yeasts, alive. Snekutis Uzupis was the first location to open, now they have 3 locations.

At the original location you can drink live beer a Lithuania specific beer that is so fresh it continues brewing in your stomach. Every batch is unique and you never quite know what you’ll get. If you are lacking the adventurous drinking streak, they have plenty of other beers to choose from too. 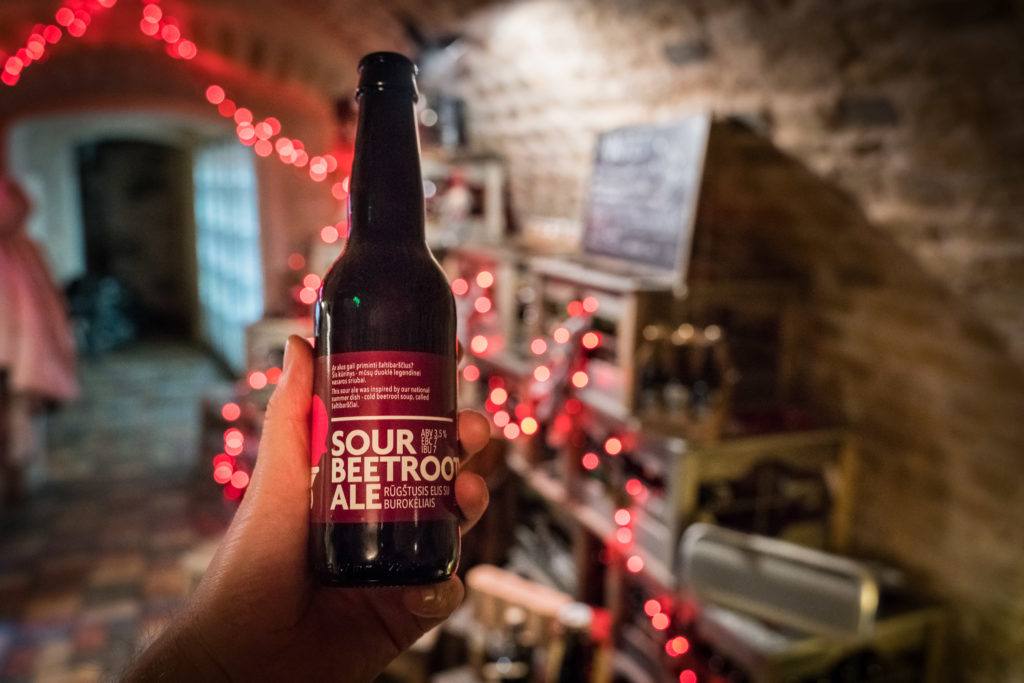 This old cellar bar is in the heart of downtown Vilnius. They focus on bottled beer and have some pretty unusual offerings. Not least, sour beetroot ale, which highlights one of the ever popular beetroot that is used in so many dishes in Lithuania. They have at least 80 beers on any given day. 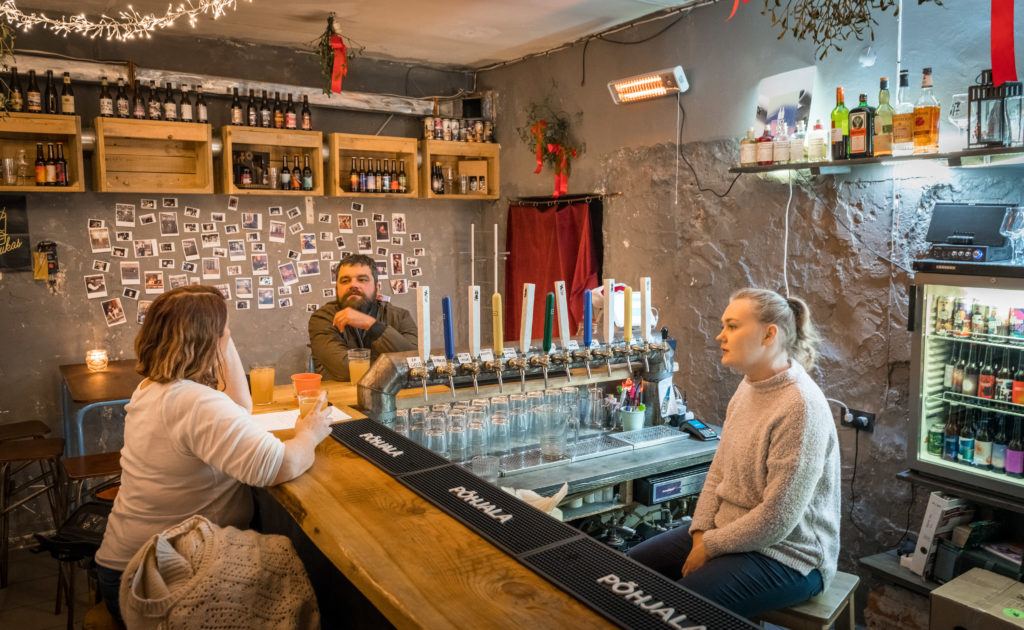 Prohibicija is a tiny hidden craft beer bar with a small but excellent selection. Aside from the beer, this bar is particularly popular with smokers as they have an outside area that is covered that somehow just stays within smoking regulations to allow smoking in an area that is sort of indoors. For non smokers, you can hang out at the bar inside. Either way, the beers here are great and well cared for. 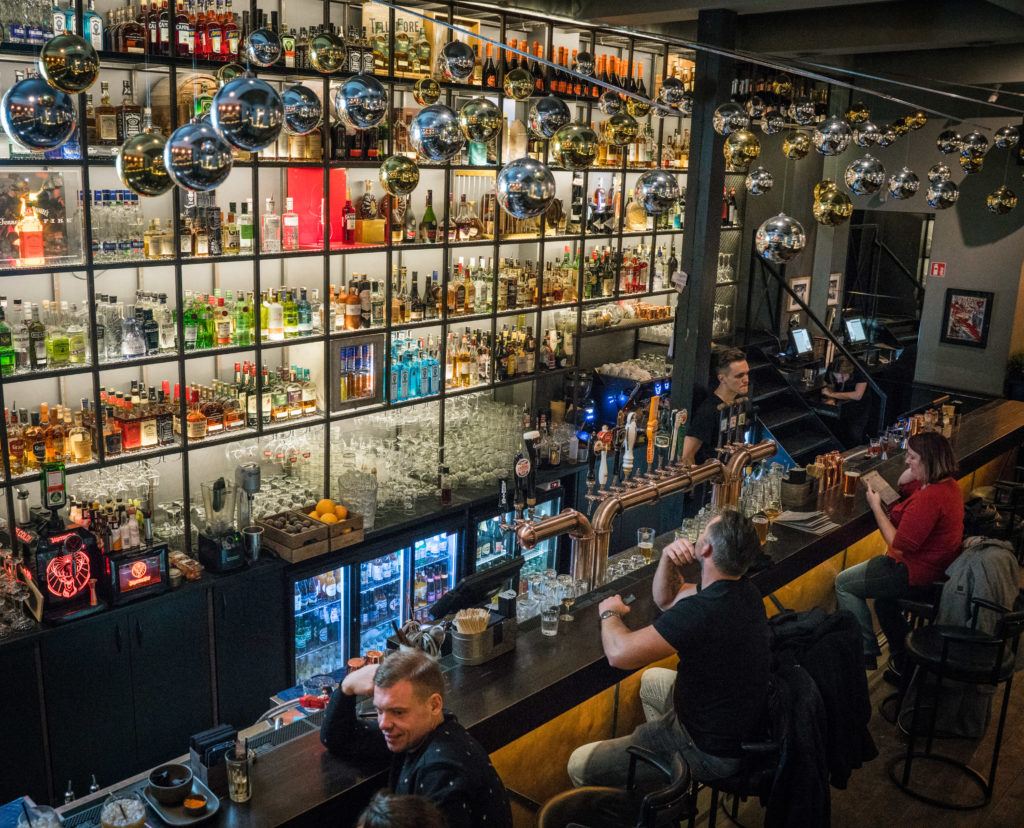 Distilerija is more of a craft cocktail bar than a craft beer bar. They make the list because of great decor and, though limited on selection they have a couple of interesting guest beers on tap all the time. During our visit, a Gin & Tonic IPA made with Juniper.

For regular craft beer selection, they are stocking a brand you might also see elsewhere in Lithuania: Raudonų Plytų Alaus (Red Brick Brewery). Originally a true independent craft brewery, they recently had heavy investment from Carlsberg Group and became the craft wing of their brewing activities in Lithuania. Corporate investment may not meet the ethical values of craft beer purists, but when it comes down purely to taste, you have a team that was originally craft now brewing with backing, and their Bocmano Ūsai (Bosun’s Moustache) is one of my favourite IPAs from the region. Very floral/hay tones. 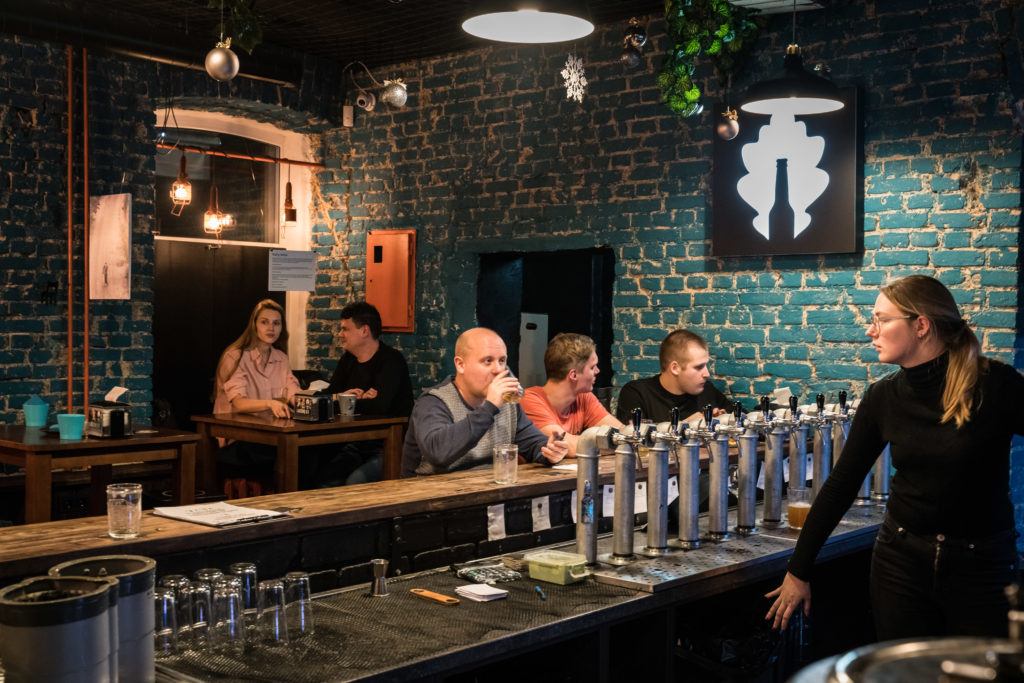 Lokal is a little out of the main tourist centre of Vilnius. They certainly have a mostly local clientele, but their beer focus seems to be mainly bringing in international craft beers with 12 taps. It’s a friendly bar with good atmosphere and, if you want to try something other than Lithuanian beer during your stay, it’s a great place to do it. 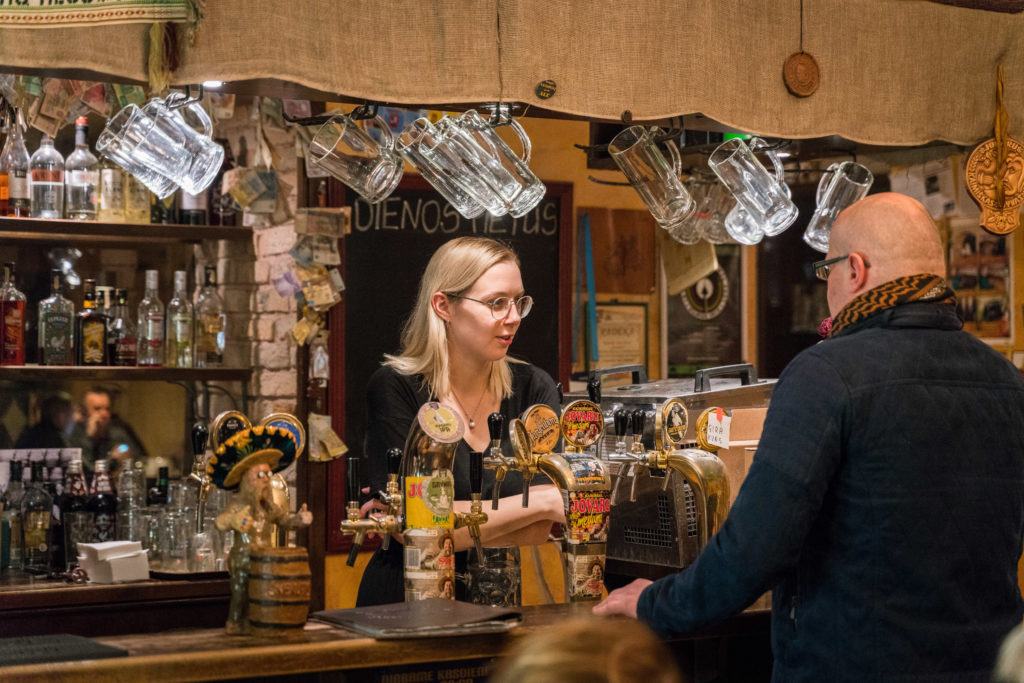 Another branch of Snekutis, to the south of the old town. It still has a great selection of beers and very affordable traditional Lithuanian food on the menu. It’s doesn’t quite have the quirkiness or history of the original Snekutis in Uzupis, but still a fun place to drink. 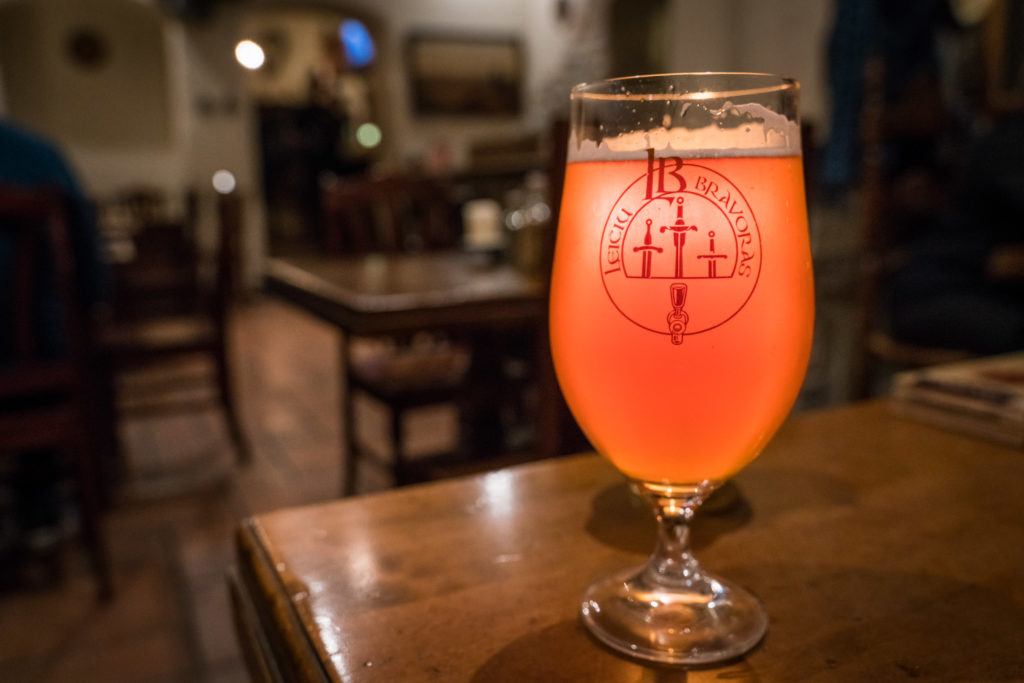 A traditional brewery with more of a restaurant feel. Alinė Leičiai focuses on selling the beers they make themselves, so it’s got the real old school beer house feel, rather than a craft beer bar. You’ll find larger, light ale, dark ale, cannabis beer and some seasonal offerings. 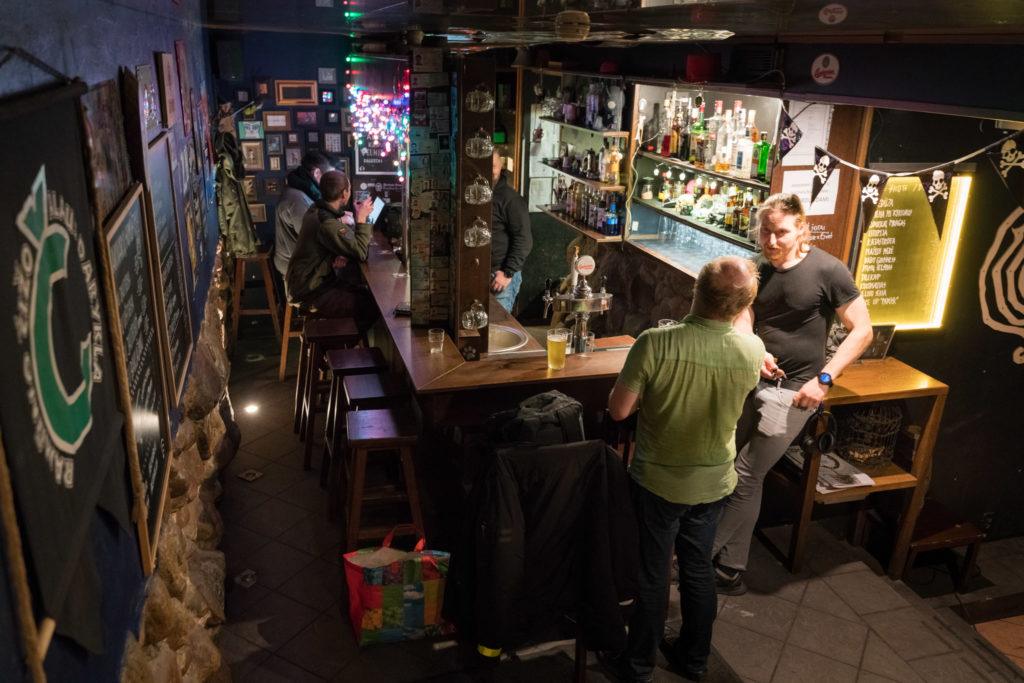 Last, but not least, Akivarai is a craft beer bar for lovers of alternative and metal music. It’s a smallish basement bar and the beer selection is definitely up to standard for anyone seeking out a good craft brew. So, if you specifically want alt music, with a local vibe, this is your top choice.

Disclaimer: Our tour with Vilnius In Love was complimentary in return for an honest review. All opinions remain our own.