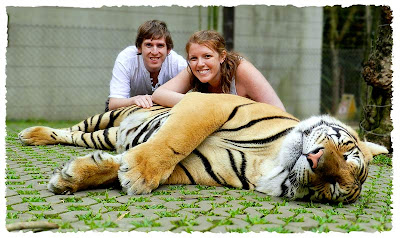 There are 2 main places in Thailand that you can get up close and personal with a real life tiger. The Tiger Temple and the Tiger Kingdom. I have visited both on two separate trips to Thailand and here I will explain the differences between the two so you can decide which one you should visit. 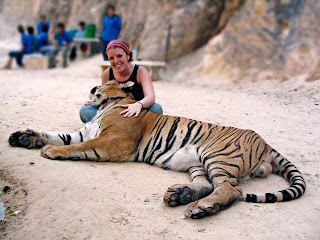 The Tiger Temple is about a three and a half hour drive from Bangkok. Some people that I was travelling with asked me if I wanted to come along in the van they had hired with a driver.
This day trip included a stop at the Bridge over River Kwai, the death railway war memorial and the Tiger Temple.

“Wildlife protection officers say they found no mistreatment of more than 100 tigers housed at a Buddhist temple that is a popular tourist attraction, though charges have been pressed for keeping rare birds.” – reported in the bangkok Post.

Yahoo travel reported that further investigations may also take place in the future. The park appears to be open again but that may change at any time, so it is worth checking in advance of making the trip out there. We have found it typical in Asia for Taxi drivers to lie about attractions being open as they want to make the money for the trip. It’s worth checking with an independent party who is not profiting from your trip, or to call the park directly.

The authorities in Thailand have raided the Tiger Temple in Kanchanaburi province after reports of illegal wildlife trading. The wild birds (that have been allegedly poached) will be released into a wildlife sanctuary.  The tigers have been impounded until the monks can prove they have the official documents to raise them.

Upon getting to the Tiger Temple you are required to pay a 600 BHT ($19 in 2011) and sign a disclaimer stating that if I am injured or killed during my visit I won’t hold the monks or temple liable for any damages.

We were then escorted to the area where the tigers are laying about in the sun. There are a few monks there watching over the tigers and also controlling the flow of tourists. Pretty much you are allowed in to go and pose with each tiger (crouching beside or sitting next to) and they move you in an orderly circular fashion around the area and then out again.

While I was waiting for the rest of my group to have their turn 2 of the tigers got a bit pissed off at each other and started having a go….we were very hastily evacuated from the area and told that no one was allowed back for at least half an hour. 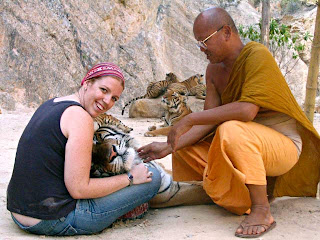 There really isn’t much else to see in the area other than some chickens and boar doing there thing…….

So how did I manage to get awesome up close and cuddly shots with the tigers? One of the girls noticed her camera had not worked at all as her battery was flat (this was 2006 just before everyone owned a digital camera) and wanted to go and see if she could get the pics taken again. I said I’d go back with her, and the two of us headed back to where the tigers were.

By this time the tigers had got over their little fight and the monks allowed us to go back in, as we were the only 2 people in the area they let us have  a more awesome experience than everyone else.

This was just absolutely awesome as the tiger just snuggled into the cuddle and pat like the giant cat that he is!!! I can tell you the rest of the group were HELL Jealous!!!
www.tigertemplethailand.com/

However, it should be noted that more recently from my visit “Care for the wild International” has released findings from a 2 year study that found the Tigers were being seriously mis-treated. The full report can be read on the Care for the Wild website. UPDATE 2015 – the care for the wild article was released prior to the most recent news that Thai authorities cleared the Tiger temple of animal mis-treatment. You will have to decide for yourself if you trust the Thai authorities’ verdict over the Care For The Wild group.

You can book rooms near the tiger temple in Kanchanaburi with AirBnB: Get $25 discount off your first stay with this link. Or there are some great hotel options on HotelsCombined

The Tiger Kingdom is situated in Northern Thailand about 25-30 mins outside of Chiang Mai in an are called Mae Rim. We had hired a driver and his songthaew for the day (400 BHT – $12 AUD) to take us to the Mesa Elephant Camp and Tiger Kingdom.

Being that there was only 2 of us its not really the cheapest way to do this, we recommend finding some other travelers to fill up the songathew which will bring down this price considerably. Songathew’s can fit up to 10 pax in the back but make sure you barter with the driver before jumping in the back.

The Tiger Kingdom is very much set up as a modern tourist attraction with a large entrance with restaurant attached which charge very western prices! (pack a sandwich)
Here you can choose which experience you wish to have. Each of course has a different price tag.

This is certainly not a budget experience compared to the Tiger Temple, but you do get the chance to take a LOT of photos, so it seems like better value. You can also opt to get a more basic package (eg. just hanging out with the baby tigers)

Strict rules must be followed
1. No flash, as it may damage the tigers eyes
2. You must approach the tigers from behind, always
3. You must never touch a tiger on the head, but can rub his belly as much as you like!
4. you must follow all instructions given to you by the keeper.

This is a very different experience as these tigers are kept in cages and not in the open like at the Temple but these are very large cages where they have plenty of room to move and trees to climb, one area even had a pool for them!

They only allow small quantities of people in the area at any time and you are always escorted by your own personal trainer. Here you get to spend much more time with the tigers (this could have been due to the fact it was a quiet day and there weren’t many other tourist around).

With the smaller tigers you get to watch them play and even are encouraged to play with them with branches from trees, coconut shells etc.

You can book great budget accommodation in Chiang Mai with AirBnB: Get $25 discount off your first stay with this link.

There is also a tiger kingdom in Phuket. We haven’t visited this one so won’t comment. In October 2014 an Australian man was mauled at this park. This could theoretically happen at any park and is something to consider, even though events like this have been incredibly rare.

The Phuket Tiger Kingdom appears to be part of the same group that run the tiger kingdom in Chiang Mai.

You can book great budget accommodation in Phuket with AirBnB: Get $25 discount off your first stay with this link. 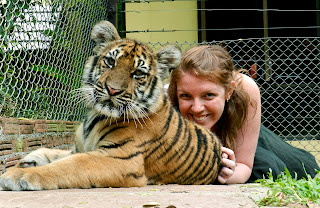 The Tiger Kingdom is a much better establishment. The tigers have modern amenities, trainers that obviously care for them and they are well taken care of. Yes it does cost more, but paying extra to insure animal welfare is worth it and im sure its not cheap to take care of so many tigers! Unlike most western attractions today you won’t get charged $30 plus per photo.

Visiting Tigers in Thailand is a topic of much debate. Many say that they are mistreated, they are drugged, and because of this we shouldn’t visit for the good of the tigers…….

Findings from the study by Care for the Wild do suggest that tiger temple keeps the mis-treatment well hidden from tourists, its true it was hard to tell when I was their in 2006. At the Tiger Kingdom in Chang Mai the situation is completely different: we encountered a British girl that was volunteering at the tourist attraction and she misplaced a few of the myths.

No, the tigers don’t tend (I wont say ever….you never know what could happen they are wild animals) to attack any visitors or keepers because they are very very well fed. To the argument that they are drugged, she said “they are cats!!! They sleep all day while its warm and tend to prowl at night”.

IN fact the day we went to the Kingdom it was quite cool in temperature and the young cats were certainly active and checking out the kids in the cafe as a quick and tasty snack!

As I said earlier while I was at the Tiger Temple two of the tigers got into a fight and the area had to be completely evacuated…….these animals are very alert. (I once had a passenger on a cruise ship complain to me that while in Sth America the Penguins wouldn’t interact with him……..with people like this in the world who knows who to believe, you just have to go and do it for yourself and make you own opinions)

The opportunity to get this close to tigers is hard to resist. The controversy surrounding The Tiger Temple in the past is a strong reason to choose Tiger Kingdom instead but of course your choice of venue may depend simply on where you are travelling as opposed to animal welfare.

If you do decide to visit Tiger Temple then at least be aware of what has been alleged towards them and that you are in a greater personal danger from animals that may have been badly mis-treated.

Looking for hotel options in Chiang Mai? We recommend HotelsCombined. They have a great selection and help you get the best possible price!

If you are visiting Chiang Mai and love animals then you may also like to get the best Elephant experience ever!

disclaimer – we are not affiliated with any of the parks mentioned in this article. Our opinions are our own and we take no responsibility for your experiences should you choose to visit. This article contains affiliate links. Thanks for supporting our blog by using these links