Why eat at The Heritage Food Village, Kuala Lumpur?

Tommo Food, Food Experiences (Restaurants and Where To eat In...)

Because its amazing! All the best street food styles of SE Asia brought into one massive food court fusion extravaganza! You will pay slightly more for the food than you would on the street, but the quality is very high and you can still find plenty of great food for $3 per serve. Whatever your favourite Asian cuisine, the Heritage Food Village at Lot 10 in Bukit Bintang (Kuala Lumpur) brings it all together. Mix and match and most of all, enjoy!

You can even get “Feet & Feet” for when “Feet” just doesn’t meet your insatiable desire to eat a lot of feet. We decided against the feet & feet… maybe next time.

With a multitude of eating options in Kuala Lumpur, we were surprised to find that we ended up at The Heritage Food Village twice during our 3 day stay… actually, we weren’t that surprised, its awesome!

On our first trip we enjoyed not only the best Satay on planet earth, but also another local classic Koay Teow (many different spellings of this around…).

Most people will probably have tried Satay at some point, and if you are anything like me you may have been disappointed by the approximations often supplied by Asian Restaurants in western countries. Quite often I’ve found the sauce to be pretty much peanut butter mixed with some spices… pretty poor. Kajang Satay re-ignited my passion for what was previously a “never order” dish, I’ve since put in quite a lot of time to create my own version of this dish myself. 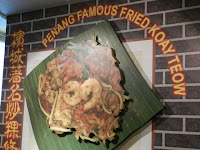 Their balance of spices was a delight! Rather than being overwhelmed by peanut, you get to enjoy a multitude of flavours which compliment the ever present peanut, and that all important crunch! Served with Rice cubes, cucumber and onion, dip away, and then dip again!

Dish number two: The Koay Teow. Quite a mild dish (although extra chili is always an option!) based around soy sauce. The fried noodels are mixed with prawns, chinese sausage and cockles – an unexpected combination that really works. Unlike your basic “throw it all in and add soy sauce” that you might make at home, its all down to the chef with this one I reckon, simple food, but executed well it is delicious!

On our second visit we could not resist the satay again… its really that good and was the highlight of our time in KL, i would go back to KL just for the satay, certainly not the city.

Along with the satay, I had an appetite for Duck, which often happens, and Star Duck seemed like the place! Our final dish was a Meat BBQ bonanza… I opted for the 3 meats BBQ combo (Duck, Chicken, Pork). I’ve found in a lot of asian street food restaurants the BBQ meats hanging up to entice you in are served cold… Its frustrating because its gonna taste a lot better hot!

I will eventually figure out how to order it warmed up. Still, it was tasty meat and i just had to imagine hard in my mind that it was warm.

They didn’t seem to serve beer, so we went covert and bought some from the supermarket and enjoyed it with our meal concealed in a plastic bag… a bit tramp-like, but needs must! Also one of the cheapest ways to drink in KL! about $4 for a 750ml beer.

Authentic: 8/10 – Malaysia is a world of fusion food, so its authentic as far as Malaysian cuisine goes, but not as authentic as if you got specific dishes in there home country. That said we mainly ate Malay classics, so they were great!

Cheap: 8/10 – Various prices, but its the next step up from street food. Still great value.

Looking for hotel options in Kuala Lumpur? We recommend HotelsCombined. They have a great selection and help you get the best possible price!