Greetings drinkers! Why pub crawl Brisbane? When we first moved here we weren’t convinced that this was really a city of exciting pubs… Happily, Brisbane has changed. There are a few mainstays that have been around forever, the real excitement though is in the burgeoning craft beer scene which has only very recently exploded all over the city. On this crawl we visit a spectrum of options, 9 top pubs and some honourable mentions!

We lived in Brisbane for over a year, and now in our last month (March 2013) we finally decided to pub crawl! Local knowledge led to us being able to put together a pretty phenomenal crawl, some of Brisbane’s most iconic pubs, like the Breakfast Creek Hotel, along with some of the less famous up and comers like Archive Beer Boutique.

The map shows the pubs from the route in blue,  and some other notable pubs that we weren’t able to make it to are marked in yellow. We started at the top and headed south. Full info and reviews are below.

Queensland has a “pub standard” which applies to almost all of there regional pubs. Often little more than drinking halls, with bad furniture and unpleasant clientele these bulk venues usually lack personality, to say the least…

The Albion Hotel is part of the cookie cutter pub industry, although one of the better “local” pubs in Brisbane, its pleasant but not unique in any way. Still, its been our local for the last year so we thought it deserved an honourary stop off  for a little warm up drink before the pub crawl proper began.. http://www.thealbionhotel.com.au/ 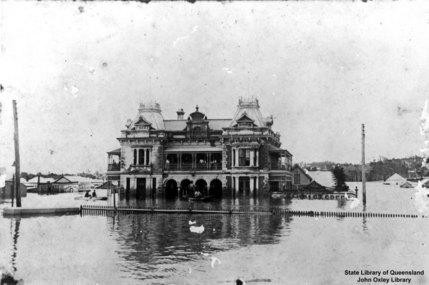 One of the longest established pubs in Brisbane, The Brekkie Creek hotel (as locals call it) was built in 1889 and then massively flooded in 1893 (pictured). Fortunately, they bounced back from that, and subsequent floods, and are now one of the only pubs in Australia to still serve XXXX beer from wooden barrels.

The front bars feel like stepping into Australian history, whilst out the back they have a much more modern al fresco dining area with a selection of restaruants, from budget pies to higher end steaks. Try the XXXX “on the wood”, it genuinely tastes different from the XXXX from modern steel kegs. http://www.breakfastcreekhotel.com/

The current incarnation of the Waterloo was built in 1937. Originally more of a dockers pub on the edge of Brisbanes old industrial district, they’ve made a real effort to refurbish this place and now it actually feels quite upmarket with leather couches and marble bar tops.

Maybe more of a place for latte and cake these days than a rip-roaring night on the beer, but still worth a look. http://www.waterloohotel.com.au/This was a substitute pub because Kerbside (one of the funkiest craft beer pubs in Brisbane) is closed on monday/tuesday.

Formally the “Elephant & Wheelbarrow”, locals are bemused by the generic new name… Still, this pub is a staple of the Fortitude Valley region of Brisbane, popular with students and the younger crowd and featuring plenty of live music and cheap meal deals.

The beer may not be the cheapest in town but the cheap food and good vibe normally make up for that. http://www.elephanthotel.com.au/

Situated on the main route between the City & Fortitude Valley, The Hotel Orient is a great stopping off point between the two and is popular with the mid-week after work crowd for cheap food/drink offers.

For some reason the “Orient” hotel is now serving mexican food? Some sort of identity crisis going on there? Still its a good pub and you can’t beat a $5 pint deal in Brisbane! http://thehotelorient.com.au/

5. The Pig n Whistle (At Riverside)

A british pub on the edge of the CBD. There more than one “Pig n Whistle’s” in Brisbane, this is the biggest one. With some British beers on tap and plenty of traditional British food on the menu (including pork pies!) this place will keep your appetite for Englishness alive…

Also popular with the after work crowd, head in on a Friday night for wall to wall people and a buzzing atmosphere! http://www.pignwhistle.com.au/

Another one of Brisbane’s most iconic pubs, originally built in 1886, the legend has it that when the Story bridge was to be built across the river the owners of the pub and members of the community banded together to stop the pub being demolished. They ended up building the bridge around the pub!

Not only historically significant, but also just a great pub! Plenty of variety in the multiple rooms of the venue, and a good beer selection to boot! http://www.storybridgehotel.com.au/

Another Brisbane staple, the Plough was built in 1885 and has proudly been serving Southbank residents ever since. This place is always busy! Especially on a Sunday afternoon.

Expect live music in the beer garden and a good beer selection, from craft pints to XXXX. Good quality food but not cheap.  http://ploughinn.com.au/ 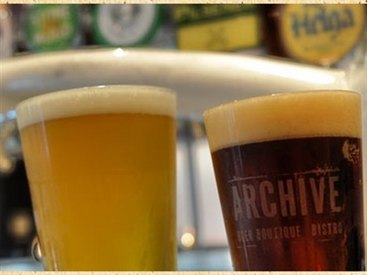 Archive is Brisbane’s most prolific craft ale pub. It has the widest, ever changing selection of beers on tap, regularly serving at least 15 different craft brews and NO generic beers (like VB or XXXX) either: A bold move in Queensland! But thats why this is our favourite Brisbane pub!

It’s almost always busy, even during the week. Popular with students but also with the beard wearing craft beer sect. The beer is not always cheap, and some of the more “original” offerings can be a gamble (like the bacon beer…), but in Australia you have to pay to enjoy the fruits of the craft beer revolution, a shame as this style of beer is half the price in England.

Quirky and eccentric, with old sofas, board games and wall art – its a fantastic pub – check it out! http://www.archivebeerboutique.com.au/

There will always be a contention over which is the best Irish pub in Brisbane: This is our favourite. 7 days a week the party will be going on til the wee hours, you can also find yourself a good price for a pint of Guinness!

Irish Murphy’s call themselves “Drinking Consultants”, and that seems like a fair description! Expect it to be rowdy with loud live music and a battle to get served at the upstairs bar! The locals know the secret is to pop downstairs to the basement bar to get your beer – much easier! http://brisbane.irishmurphys.com.au/

The Brisbane pub scene has had somewhat of a renaissance in the last year. Since we moved here the selection has greatly improved. There are definitely some other great pubs that we didn’t make it to on this crawl. These ones serve up some great beers.

The Scratch – Small but cosy craft beer pub in Milton. They have 5 taps and the beer changes almost every day.

The Brewhouse – One of Brisbane’s original microbreweries. They make some great beer but the venue is not the greatest. $10 jugs of pale ale at selected times!