Listen to the full Mezcal vs Tequila podcast, as well as reading the full article and companion notes below.

In This Mezcal vs Tequila Episode:

The below content is a summary and companion to the full podcast episode above. Listen to the podcast for our full interview with Mezcal & Tequila expert Rafael from Mezcaloteca tasting room in Oaxaca, Mexico. You can make a reservation through their facebook page.

Mezcal vs Tequila: The difference between Mezcal and Tequila

The number one difference between mezcal and tequila is simple… All Tequilas are a specific sub-variety of Mezcal. Mezcal is the primary name used to describe all types of distilled agave. So rule 1: All Tequila is Mezcal. Only one type of Mezcal is Tequila.

Rule 2. Tequila can only be made from Blue Agave grown in the state of Jalisco, Mexico. So, like Champagne, the real stuff has a designated origin. Mezcal, on the other hand, can be made from any Agave in any state, though some states, like Oaxaca, grow and produce far more than other states.

For those who never tasted Mezcal, the primary noticeable difference between Mezcal and Tequila is that Mezcal is intensely smokey in flavor. Tequila has no smokiness at all.

Mezcal vs Tequila: The History Of Tequila 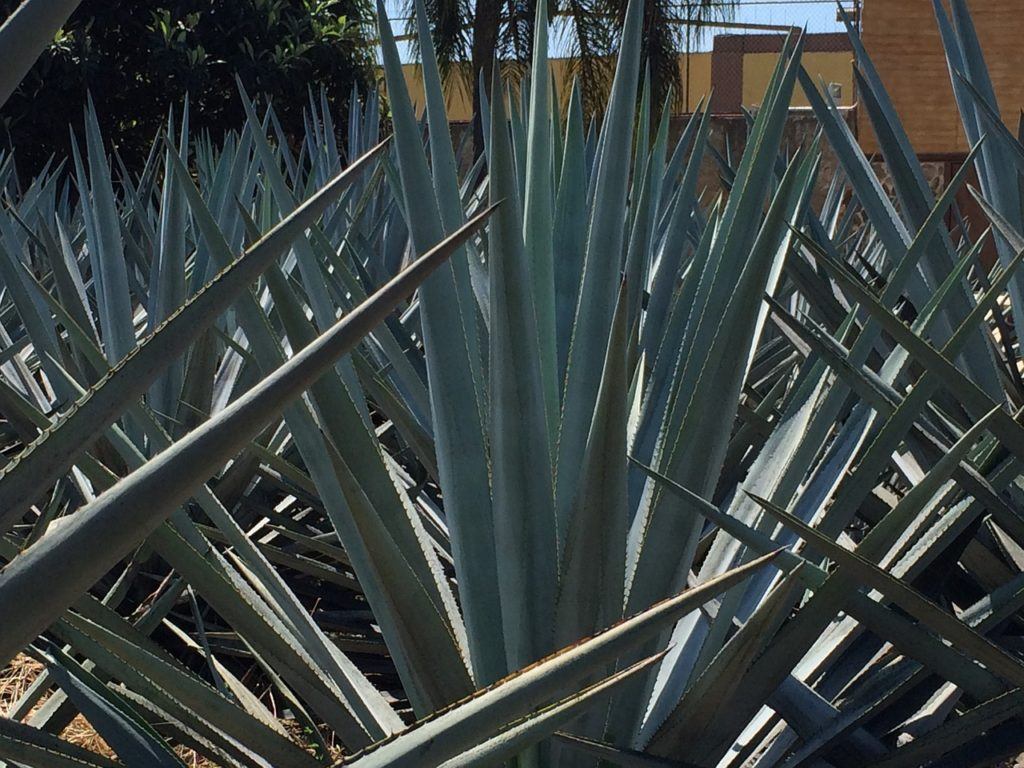 History of Tequila: The Blue Agave – the only agave that can be used to make Tequila.

The Aztecs have a legend that lightning struck an agave plant. The heat and force opened the agave and begun the natural fermentation process. This led to a sort of agave beer, which the native populations of the region then started to make themselves, without lightning. But tequila and mezcal could not be made until distillation was introduced to the region. More on that below.

As tequila is just a specific form of Mezcal, you could say that the real history of modern tequila has evolved out of the tradition of mezcal to the point where in 1973 the Regional Chamber of the Tequila Industry applied for a  declaration of protection for this appellation, which was granted in 1974 by the Mexican government. Following this, in 1976, the legal name of Tequila became protected.

The biggest milestone came in 1996 when the Mexican government approved an internationally recognized Declaration for the Protection of the Appellation of Origin Tequila which protected Tequila internationally and led to its rapid spread around the world.

Mezcal vs Tequila: The History Of Mezcal

There are many different stories surrounding the history of Mezcal.

The official version is, Mezcal was first produced after Spanish colonization. This is believed because it’s thought the indigenous inhabitants of the region did not know how to distil alcohol.

The second story for the history of Mezcal is that archaeological evidence of cooked agave in clay pots dates back 8 to 10 thousand years. But it’s hard to prove with the current evidence that the agave was being turned into booze, rather than being cooked to be eaten.

A third possibility for the history of Mezcal was that Filipino slaves, brought to Mexico by the Spanish, actually taught the locals how to distil alcohol.

Before learning distillation techniques, locals were drinking fermented agave – sort of like agave beer but thick and milky – one popular variety you can find in Mexico still today is “pulque”. It was a simple step to move from drinking pulque to distilling pulque-like beverages.

More Mezcal vs Tequila info below…

* Early Access To New Episodes
* Bonus Mini Episodes
* Increase our budget which = Better equipment, better sound & editing
* More Episode Releases – We can devote more time to making podcasts, rather than our regular blog business activities
* You can feel good that you are supporting the show you love!

Mezcal vs Tequila: How to drink mezcal correctly

The stereotype of downing a shot of Tequila with salt and a wedge of lime/lemon seems to have arrived from necessity. If you drink super low quality tequila or Mezcal, then anything you can do to mask the flavor is preferable. And getting the drinking done quickly, rather than savoring it, is also a priority.

When drinking lower quality Mezcal, or for beginners, you may get served wedges of sour orange and sal de gusano (worm salt, often mixed with chili). Yes, this salt really is ground up little salty worms. Sounds gross? If I hadn’t told you what it was and you tried it for the first time, I guarantee you’d like it. So man up and give it a go – you may already have had it unknowingly if you have been to Mexico.

But, for a true quality Mezcal or Tequila, you should not adulterate it with condiments. And you should sip it, not shot it. Just like you would a fine whisky. So then you can appreciate all the complexities.

A proper artisanal Mezcal should be at least 45% Alcohol for it to hold all the characters it was born with.

When tasting a mezcal, you should take a drop of mezcal first and rub it on your palm. It should release the scent of smokey agave, any other smells or chemicals could suggest it is not a pure, natural Mezcal. Then proceed to sip and enjoy.

Mezcal vs Tequila: What’s the deal with the Mezcal worm?

There is a commonly held belief that the Mezcal worm can lead you on a crazy hallucinogenic trip. It’s a myth. The word Mezcal has often been confused with the word mescaline. The later is the psychedelic component found in peyote cactus. Unless you have a supplier purposefully adding mescaline to their Mezcal, then the Mezcal worm will not take you on a colorful adventure to unicorn land.

The mezcal worm has one definite purpose, to impart flavor of worm into the Mezcal. It’s no different from leaving real fruit in a bottle of raki. Some aficionados say it’s wrong to tarnish the mezcal with the worm. Really it’s down to your personal preference. Specifically, the mezcal worm lives on and eats the agave which is then used to make the mezcal, so it’s a part of the natural eco-system of mezcal production too.

Especially, when it comes to Tequila, an important purpose of the mezcal worm is purely for marketing reasons. Especially in cheap tequila where no one is trying to enjoy the complexities of the spirit. The Mezcal worm began life as just that, not as a tequila worm. But it certainly helped sell a lot of bottles of tequila!

We even tried a scorpion mezcal – yes, it has a real scorpion in the bottle. The owners of the company that make scorpion mezcal insist it is about flavor and not about marketing. All I can say is, the scorpion left a real sting in the form of a 3 day hangover – one of the worst hangovers of my life. This could also be down to the quantity of Mezcal consumed that night… 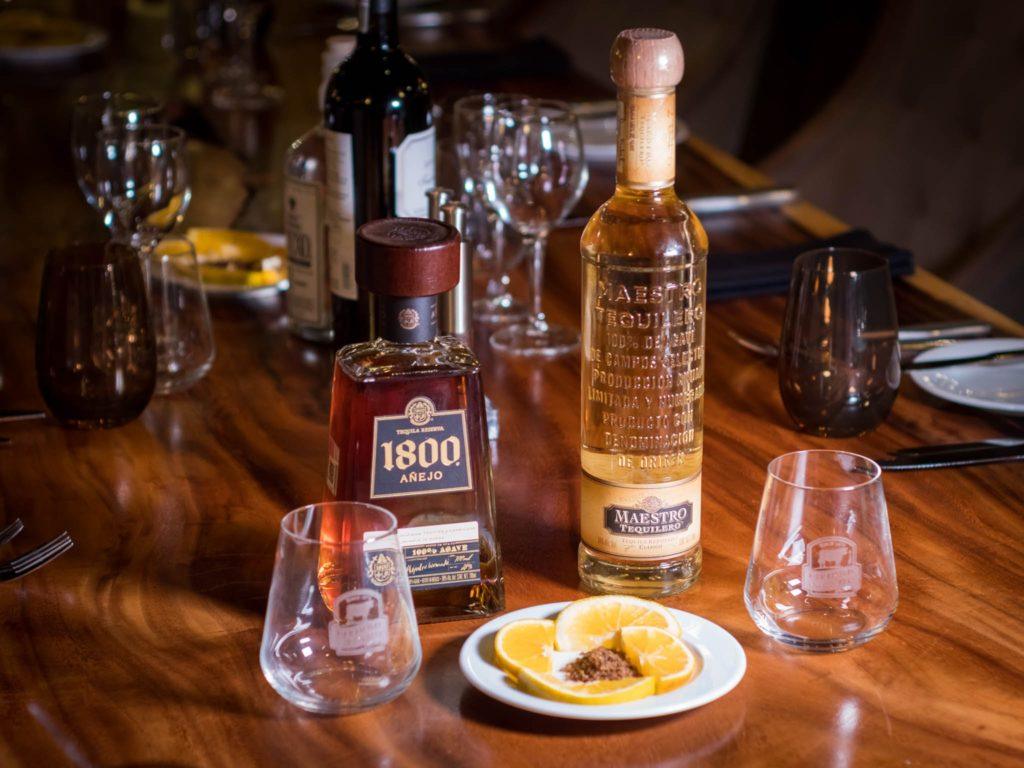 Some fun facts about the blue agave – the only agave that can be used to produce Tequila. 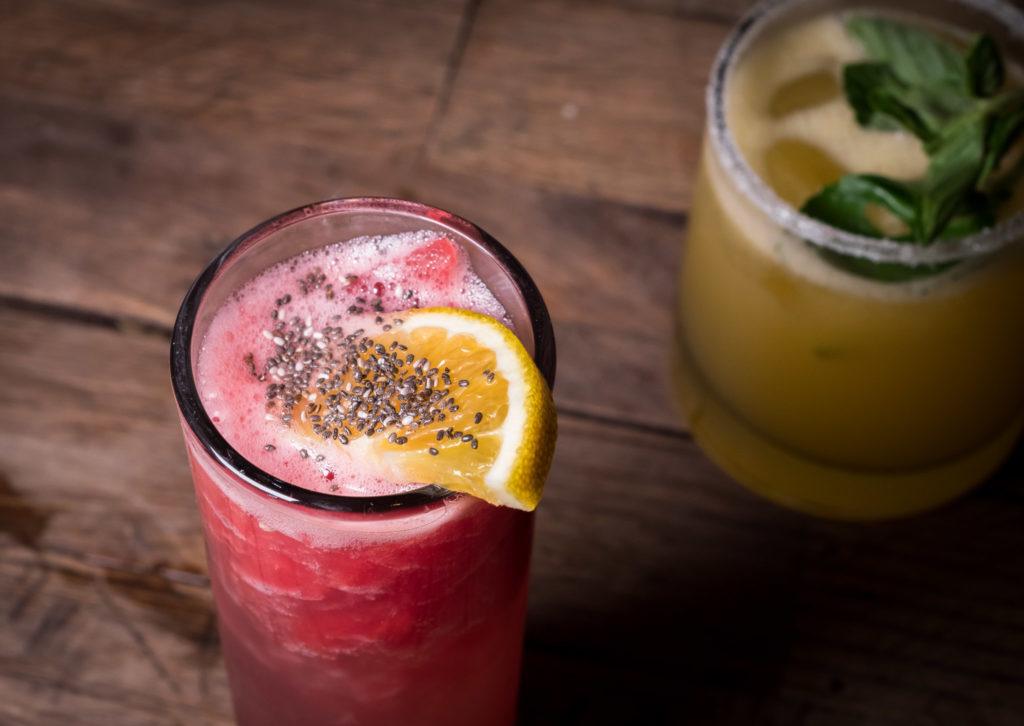 Mezcal has quickly become one of our favourite spirits for mixing in cocktails. It’s unique in the spirit world for its powerful smoky tones. When combined with other spirits (such as a floral Licor 43) and with sweet and sour elements – such as lime and pineapple – you are looking at a multidimensional drink. A unique flavor combination you just can’t find without Mezcal.

In the battle of Mezcal vs Tequila, Mezcal is definitely winning the cocktail war.

We wrote more about the amazing Mezcal cocktails we had in Oaxaca here.

Get even more detailed info on the history of Mezcal, plus make some of those amazing Mezcal cocktails for yourself in this critically acclaimed book. NOMINATED FOR THE 2018 JAMES BEARD FOUNDATION AWARD IN BEVERAGES!

Get the hard cover edition for your coffee table, or grab the ebook edition.

Mezcal vs Tequila: The difference between aged & young mezcals

As you already learned above, all tequilas are mezcals. Most purists prefer mezcals not to be aged, though you can certainly find aged ones. For tequila, especially the cheaper brands, the ageing process can take the edge off.

Purists would argue that young mezcal, that has not been aged in wood, will represent the true flavor of Mezcal better. Wood imparts it’s own flavor to the Mezcal and can dominate the natural flavors. The 4 main types you can find are:

Tequila vs Mezcal: The Production Process 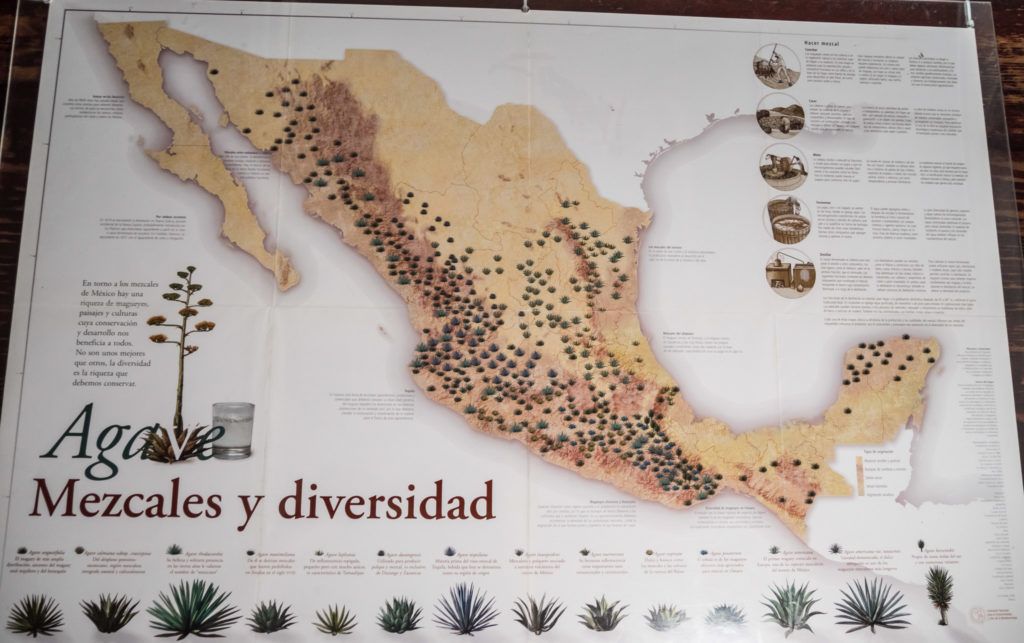 Tequila vs Mezcal: Map of agave diversity across Mexico (in Spanish)

But the production process is relatively similar for all artisanal mezcals, though each producer may make variations. The industrial tequila process is very different though…

Mezcal Production & Elements That Effect The Taste Of Mezcal

Oaxaca Produces 80% of the Mezcal that is made in Mexico, and about 90% of the mezcal.

Here is an outline of the typical artisanal production process:

Growth, Harvest, Cooking and Fermenting + Elements that affect the flavor

FUN FACT: The “piña”, which is the heart of each agave plant, used for the mezcal production process, can weigh over 300KG.

Tequila Production – The difference between Mezcal and Tequila

Most big commercial Tequilas are made industrially – not following the traditional process. 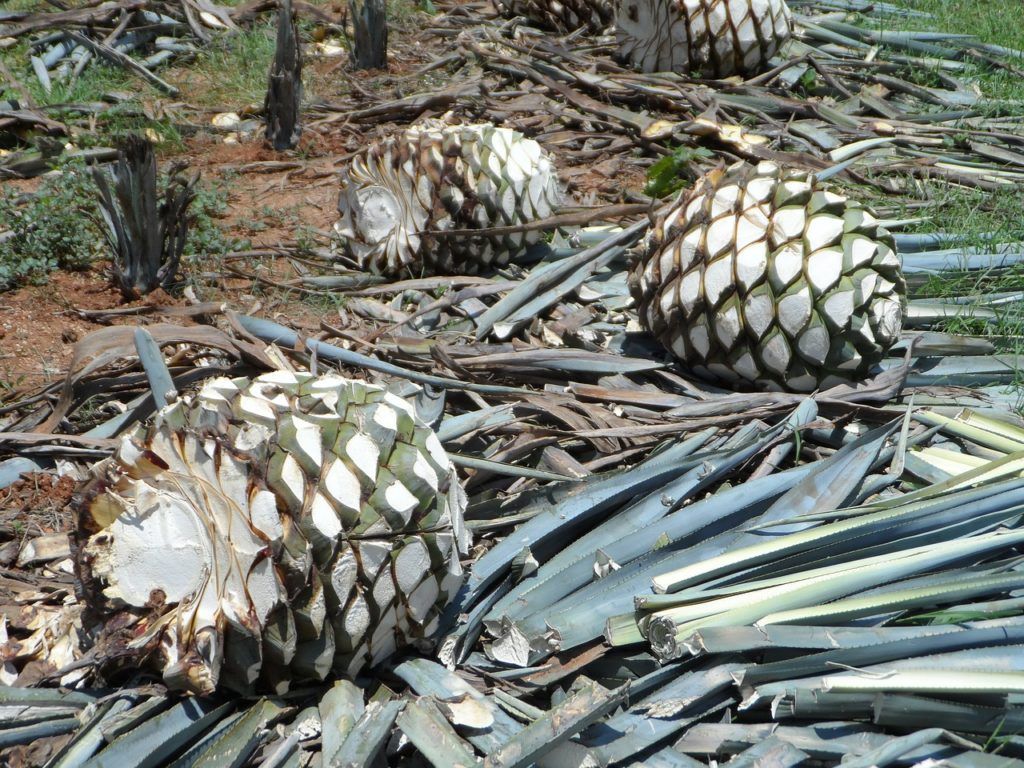 Both Mezcal & Tequila are made from the “piña”, which is the heart of the agave, not the leaves.

If you go to Mexico and visit a Tequila farm you may find some of the few places where tequila is being made a little closer to traditional practices.

Tequila is never smoked like Mezcal is. So instead of open cooking in a pit oven, even artisanal tequilas are typically baked in a giant metal oven. This is why they lack the smokey flavor.

However, outside of the tequila farms that tourists visit, when you head to a mass-scale tequila production site, you’ll find that the large agave piñas are cold pressed and then steamed. By using powerful machinery to break up the solid piña, this greatly reduces the cooking time needed to break the agave down into sugars ready for fermenting.

Once cooked, rather than natural yeasts slowly fermenting the musto, artificial yeast is added to speed up the process. A controlled environment and yeast insures a consistent product for every batch. And the industrial process reduces time and costs for the mass market.

The Best Mezcal – What To Drink – Where To Taste Mezcal

We went right to the source – Oaxaca itself. To taste the most interesting and surprising Mezcals. From one with hints of beetroot to classic smokey Mezcals with 50%+ alcohol content.

Our host Rafael, the owner, is a Mezcal expert and tasting aficionado. We interviewed him in the podcast episode at the top of this article.

He gave us a short list of his favourite mezcals types that you should try:

Tobala – Tobala mainly grows in high altitude canyons in the shade of oak trees. The Tobala agave takes 12 to 18 years to reach maturity. Expect cinnamon and mango notes with a smooth finish.

Tastings at Mezcaloteca are better by reservation, to ensure a member of staff is available to give you a one on one tasting experience. You can make a reservation through the Mezcaloteca facebook page.

Why does Mezcal give you less of a hangover?

That said, we’ve had terrible Mezcal hangovers a couple of times! I think it’s all a myth that it won’t give you a hangover. You drink enough of anything and ouchie brain is sure to follow!

Love it? Why Not Pin It?