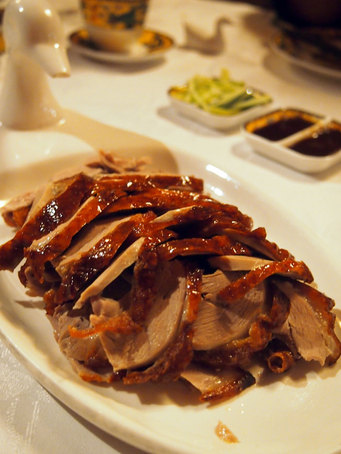 China is a tricky one as there are more national dishes than you can count with both your fingers and toes combined, and some of the dishes contain fingers and toes… but for this article I’ve decided to focus on a favourite of ours: Peking Duck! This imperial dish hails from Beijing and with a long history, the first written account being from 1330. World famous, this dish is known for its super crispy awesome skin with the flesh remaining both tender and succulent. The most popular way of serving peking duck is in a thin pancake with plum dipping sauce as an accompaniment…….are you drooling yet???

We can all agree that as far as strange food goes, China is king. “The Chinese eat everything with 4 legs, except tables and everything that flies except planes” goes a Chinese saying. I say they eat a lot more variety than just the 4 legged and the flying beasts. As such we have a bit of a bumper crop for China, so here goes… 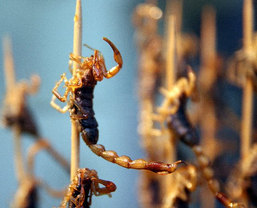 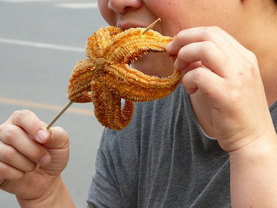 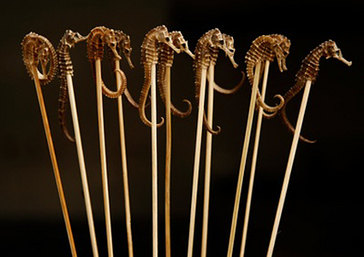 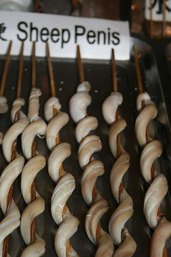 Once again a situation of where do I start……We all know that Chinese cuisine can be a mouthwatering culinary experience, but on the flip side they do like to indulge in some food that us Westerners find a little strange. At the night market in Beijing you can find everything from seahorse to sheep penis on a stick! Just close your eyes take a mouthful and walk away saying “I did it!!!” 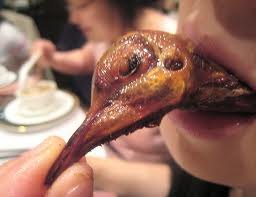 I had to throw this one in as I have not heard of it before and I wanted to make you go eeeewwwwiiiiie!!!

Yes, I’m sad to say it is true, cat is sometimes food rather than friend… I couldn’t bring myself to post a photo of cats being chopped up, so here is an alternative photo for illustrative purposes only… 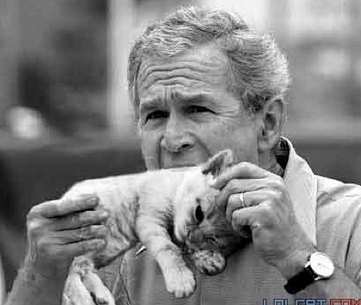 If you really want to eat cat then the southern provinces of Guangdong & Guangxi are the best places – and you’ll have to go rural as it is rare to find in the cities apparently… but who knows, you may have already eaten some, tastes like chicken! Cat in Chinese is pronounced “meow” – funny eh? I’m not kidding either. 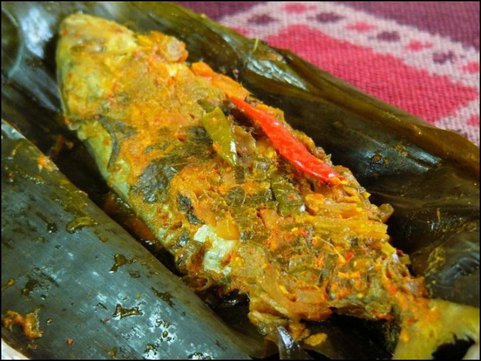 Ikan is a local fish, Pepes is the local word for cooking in a banana leaf. Its that simple, classic Asian cooking. 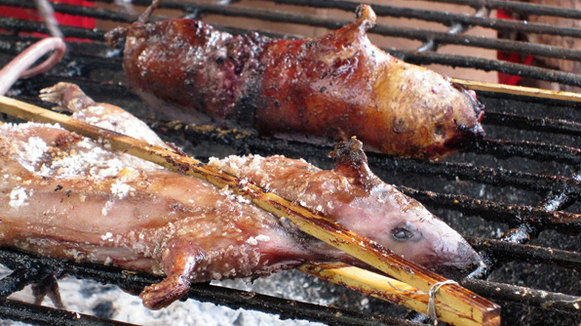 East Timor is not the only country in Asia who “enjoy” the flesh of the rat, but it is a menu option there. Its grilled vermin… Whatever floats your boat I guess.

Yeah, Georgia are greedy and have 2 national dishes. They are both simple but awesome. Khachapuri is a leavened bread with a cheese filling, in addition to which are various topping choices, an egg (as pictured) or potato, or more cheese! Amongst others. 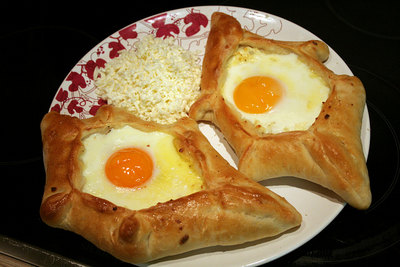 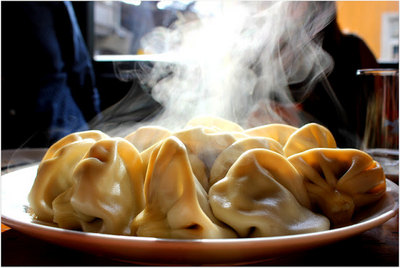 Khinkali are dumplings normally stuffed with a spiced meat, greens and onions. 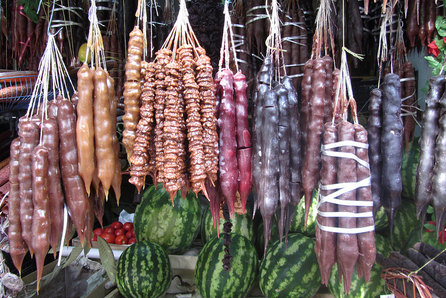 Churchkehla may look like dodgy german sausages, but they are actually a sweet dish sometimes referred to as the “Georgian Snickers”. Stuffed with nuts, they look a lot worse than they taste.

The practice of eating the brain of a live monkey (yes, alive!) is becoming less common for obvious ethical reasons and therefore harder to indulge in. I will leave this one up to you to decide if you really want to seek it out, but it is apparently something that is highly sought after to help cure impotence!

Of course…..everything strange in Asia is to “make Man Very Strong!!!” 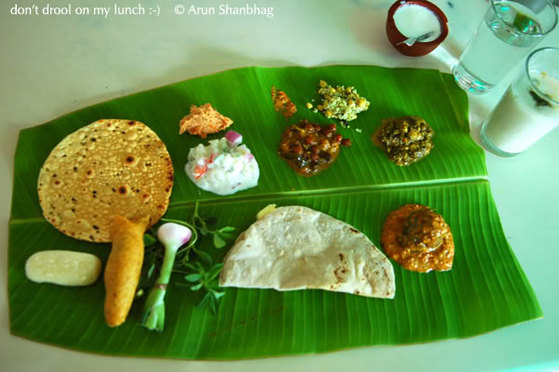 There is no Indian national dish! There are so many distinct cuisines in the country that, like China, its impossible to agree on one dish that represents the whole country. We have however chosen the most awesome way to enjoy your curry – on a banana leaf! Not something you’ll see in most western countries but a very popular way of serving curries in India and other parts of Asia. 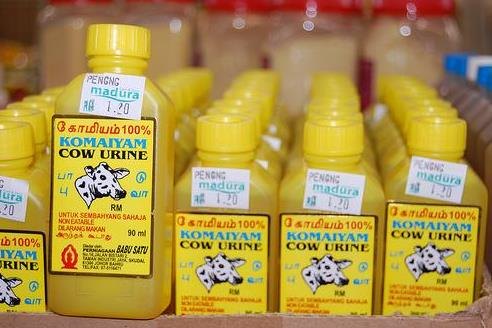 This one is NOT an “Engrish” mis-translation – they really drink cow urine. Hindus believe it contains therapeutic qualities and its so common that you can find it in corner shops alongside milk and yoghurt.

An Indonesian salad made with boiled vegetables and covered in penut sauce. Also featuring the Indonesian tradition of having half a boiled egg as garnish. Indonesia also have a second national dish of “Nasi Goreng” – Rice with Meat and veg – well, I think we’ve seen enough rice with meat dishes, you can imagine what it looks like. 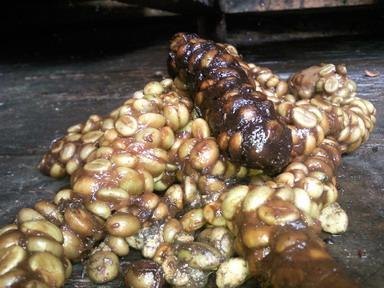 This looks slightly like a turd, because it is! One of the most prized delicacies in Indonesia is a brand of coffee that is made from partially digested coffee beans. 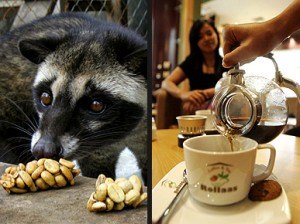 A local creature called a “Luwak” consumes the coffee cherries and they pop out the other end as coffee beans! They are then cleaned, packaged and sold for $30 per kilo!

After mixed rice dishes, the next most popular national dish in the middle east seems to be Kebab. In Iran the Chelo Kebab is the favourite, minced meat on a skewer, normally served with rice and grilled tomato, occasionally but rarely a raw egg is also placed on top of the rice. 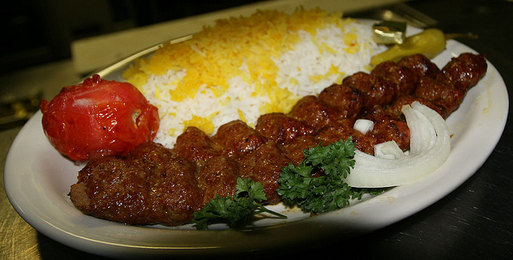 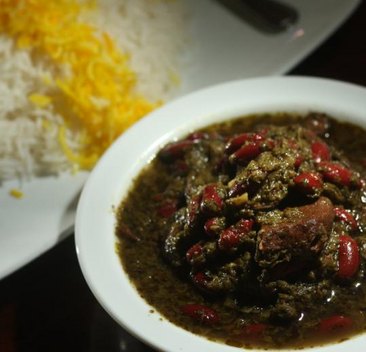 The literal translation of Ghormeh Sabzi is “Stewed herbs”. Parsley and coriander along with a variety of greens are stewed together along with fenugreek leaves. Then kidney beans and lamb or chicken are added.

This traditional dish is made from whole sheep head and hooves… Its a classic breakfast dish in Iran. Yum, better than bacon and eggs?! Its seasoned with lemon and cinnamon to give the offal that breakfasty taste. 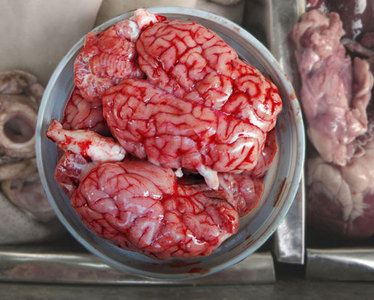 The Raw meat before it is cooked up for Breakfast (above) 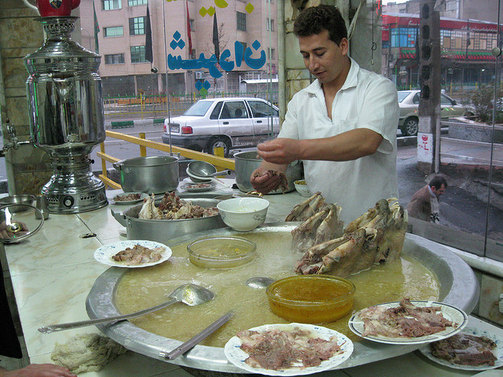 In Uzbekistan you can find the same preparation made with goat instead. 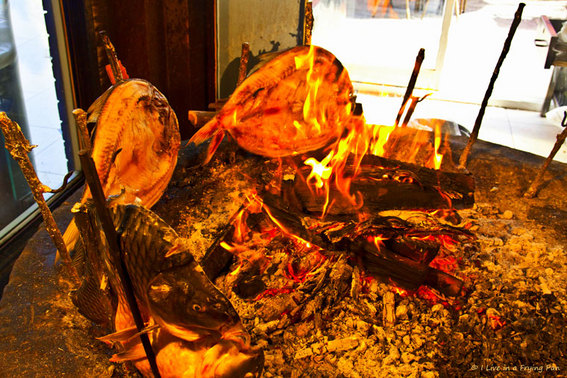 The fish is generally stored live and when ordered it is killed and cut in half and flattened. Its coated with a marinade of olive oil, rock salt, tamarind and turmeric and then grilled by the fire for 1 to 3 hours. The customer will graze on mezes (snack plates) whilst they wait, then the fish is served with flatbread. 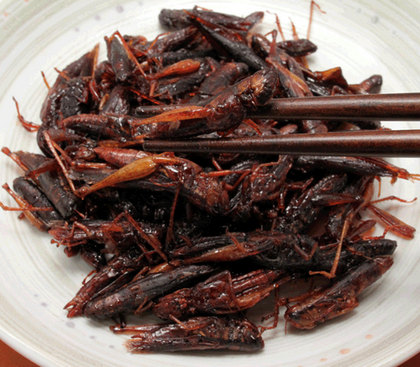 First of all, this photo is not from Iraq, there is no photo from Iraq of this dish that I could find, and I’m not heading into a warzone simply to eat and photograph locusts. The information about this dish states that only female locust are served, the legs are pulled off by the diner and then the head is dipped in salt – no double dipping please. 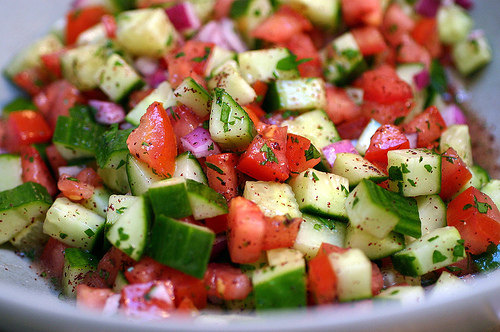 Looks like a greek salad but without the olives & Feta, the key difference is that all the ingredients must be diced as small as possible, a mark of status is given to the perfect dice. Hummus is also considered a national dish of Israel, but as Hummus is popular throughout the middle east we thought we’d feature the salad instead. 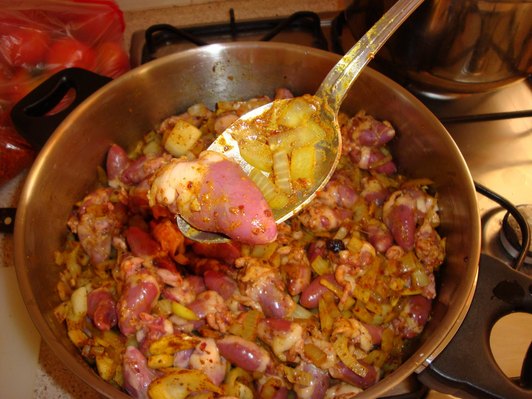 The hearts of many chickens cooked into a “delicious” curry, why waste the hearts when you can make curry, right? Find this in Jerusalem.

Up Next: Japan, a foodies wonderland but also with many strange surprises, onto page 3…